Singapore Airlines once installed six jackpot machines on one of its Boeing 747s. It didn't quite go according to plan.

When the Airbus A380 was first announced, there was no shortage of ideas about what to do with all that real estate.

Shopping malls, gyms, bars, and beauty parlors were mulled in the early days, with some proposals more reminiscent of a cruise ship than an airplane. Of course, economic reality eventually set in, and many of these plans were exposed as nothing more than the fever dreams of airline executives with deep pockets and shallow minds.

But there was one particular proposal that stood out: a flying casino. Virgin Atlantic founder Richard Branson claimed he’d outfit his six A380s with roulette, blackjack and slot machines, which coupled with the double bed suites, would give passengers “two chances to get lucky.”

It turned out to be a mere flight of fancy, as Virgin Atlantic never took delivery of a single superjumbo. But if Sir Richard had simply bothered to consult his 49% shareholder Singapore Airlines, he might have played his cards a little differently.

After all, Singapore Airlines already had a brush with inflight gaming 25 years ago, and it didn’t quite work out.

A gamble on inflight entertainment

In the 1980s, Singapore Airlines was looking for new ways to entertain its passengers. They had already tried live entertainment a few years prior, with singing troupes serenading passengers from the aisles. Then came an inflight fashion show to commemorate the launch of services to Paris. But the minds at Airline House wanted to know: what was the next big trend for inflight entertainment?

This was deemed newsworthy enough to make the front page of the Straits Times, albeit sharing a column with “store catches fire”, and competing for attention with an adjacent advert for the latest Philips Transcriber 187.

SIA officials took pains to stress that they were not endorsing gambling, only providing their customers with a different form of inflight entertainment. A statement issued by the airline said “the machines are being introduced solely on the merits of their recreational value to passengers.” Sure, and the sole purpose of an integrated resort is to let us sample a wide variety of celebrity chef restaurants.

The company behind the jackpot machines was Cemae Investment, run by one David Flexer.  Although he’s far from a household name, aviation boffins would recognise him as the man who single-handedly popularized the concept of the inflight movie.

In one sense, Flexer was a visionary. While films had been screened on aircraft as early as 1921, they were essentially one-time promotional stunts and airlines were roundly disinterested in the idea, believing the space and manpower required to run a projector wouldn’t justify the benefit.

But Flexer, himself a film buff who owned a small chain of movie houses, felt otherwise. After a particularly arduous transcontinental flight in 1956, he concluded that “air travel is the most advanced form of transportation, and also the most boring”, and set out to change it.

It was Flexer who solved the problem of creating lightweight, completely automated film equipment, and the end result was a 75-pound cabin-certified projector playing 16mm film (the gauge that allowed for full movies to be screened). TWA debuted its “Strato-Cinema” for First Class passengers in 1961, and we’ve been glued to our screens ever since.

In another sense, however, Flexer was hopelessly off base about the popularity of the in-flight slot machine. He fully expected that flying casinos would be the wave of the future, and invested heavily in the concept. Researching the first generation of slot machines and getting FAA approval alone took three years and millions in R&D, and he was keen to market the idea to other carriers too.

He’d have to wait though, as Singapore Airlines had secured exclusive rights to the machines for four months from launch, after which other airlines would be permitted to purchase and install them.

A total of six machines were installed per plane, with four in the aisle and two more on either side of the cabin (eight Economy Class seats were removed to make room).

Extensive modifications had been made to adapt them for cabin conditions. Each weighed a mere 16kg, versus 68kg for a standard machine. They were powered by rechargeable batteries, and virtually silent to minimize noise pollution. Gone were the obnoxious audio cues that filled Vegas gambling halls, and added were padded trays to muffle the sound of coins paying out. After all, a noisy slot machine in a casino may attract punters; a noisy slot machine in a cabin might spark a riot.

The six jackpot machines were dubbed “Orchard Rows”, a clever homophone playing off the famous shopping street (rejected names: Jackpot in the Sky, Hi-Flier, and my personal favourite- Jetpot). They boasted a payout ratio of at least 90% (meaning that collectively, players would recover 90% of the money put into the machine), much higher than the 50-70% found in casinos on the ground at the time.

Slots would require a minimum bet of US$0.50, and passengers 18 and older could exchange cash for tokens with the flight crew. Winnings would be converted to cash onboard, and those who struck the jackpot could take home US$200. A special one-off jackpot of US$25,000 was announced, but never actually materialized.

Singapore Airlines’ competitors were bemused, if unimpressed. Scoffed a Japan Airlines official to Newsweek, “It’s a ridiculous idea. If we were to go to such an extreme- which we are not- we would install a traditional hot bath.”

I don’t know though. A couple of jackpot machines versus a hot bath on an airplane with 170 miles of electrical wiring…

On 25 August 1981, SIA’s first jackpot-equipped Boeing 747-200B took flight. SQ2 departed Changi for San Francisco, with stops in Hong Kong and Honolulu en route. The total flight time was blocked at 23 hours, and for the first eight, things went great.

148 out of 330 passengers managed to secure a 15-minute playing slot. The champagne was flowing, the slots were paying out, and a convivial atmosphere descended on the cabin. Recounted a passenger on the inaugural flight “Little old ladies trying to get to the lavatories had to push through the crowd around the casino.” David Flexer’s flying casino had really come true.

Then the machines broke down. All of them.

Remember those modifications I mentioned earlier? As it turns out, to shave precious pounds off the machines’ weight, many metal components were replaced with plastic. Now, slot machines are a labyrinth of moving parts, from the reels to the arm to the coin sorters. With metal innards, they can withstand a fair amount of abuse. But swap them with plastic and set a planeload of tipsy passengers on them? No chance.

The coin slots jammed often, and the plastic chassis didn’t take kindly to the assaults of disgruntled patrons attempting to elicit a refund. Two arms were broken clean off by overenthusiastic passengers, and with barely a third of the flight completed, the flight crew had to shut down Orchard Rows.

Repairs didn’t happen until a few weeks later, owing to the difficulty in securing enough ground time to make them, and even then the jackpots disappeared for eight months. It wasn’t until May 1982 that SIA broached the topic again, announcing its intention to take a second bite at the cherry.

Among the major modifications included swapping batteries for aircraft power, and removing the tokens in favor of a computerized credit system. Instead of swapping cash for physical tokens, passengers would instead buy credits from the jackpot attendant, who would input them via computer to the slot machine. This would not only reduce the labor involved in converting fiat and cashing out winnings, it also removed the chance of a stray token gumming up the works.

The payout rate was lowered slightly to 80-85%, but the minimum bet would be halved to US$0.25, and the pay lines for a jackpot would be increased to three or five ways (versus one before).

“With the new machines will come the end of all these problems”, the Straits Times confidently predicted, thereby jinxing the entire venture.

The machines did indeed return the following month, and for a while, all was well. The LA Times carries a story of one Paul Yong, who was summarily relieved of US$200 in the space of 20 minutes on a Singapore to Los Angeles flight (he blamed his children for goading him on). In fact, later that year in November, Singapore Airlines even announced that it was going ahead with plans to install jackpot machines on all 16 of its Boeing 747s.

And then…nothing happened. The media coverage went completely silent after this, and the next reference to SIA’s jackpot machines comes almost in passing, in a November 1984 article discussing the imminent introduction of Donkey Kong and other video games onboard.

“But after its bad experience with jackpot machines, SIA was cautious about introducing video games. A month after it installed jackpot machines three years ago, the airline had to take them off the planes as the tokens used would jam the machines. Using computer recorded credit later also proved unsatisfactory”

Just like that, Orchard Rows was no more. It wasn’t SIA’s last flirtation with onboard gambling- in 1996, they installed virtual jackpots on the newly-launched KrisWorld system (along with blackjack and poker), allowing passengers to swipe their credit cards and place bets starting from US$0.25. But it was the last they ever tried with physical gaming machines. The space, maintenance, staffing and operating costs all just didn’t make economic sense.

In the final analysis, however, the goal might never have been about money. When the one-armed bandits first took to the skies, the news made the papers all the way from the London Daily Telegraph to the Jerusalem Post. Suburbanites who lived in Minnesota and couldn’t even find Singapore on a map now knew about its national carrier, and that’s the kind of publicity money can’t buy. 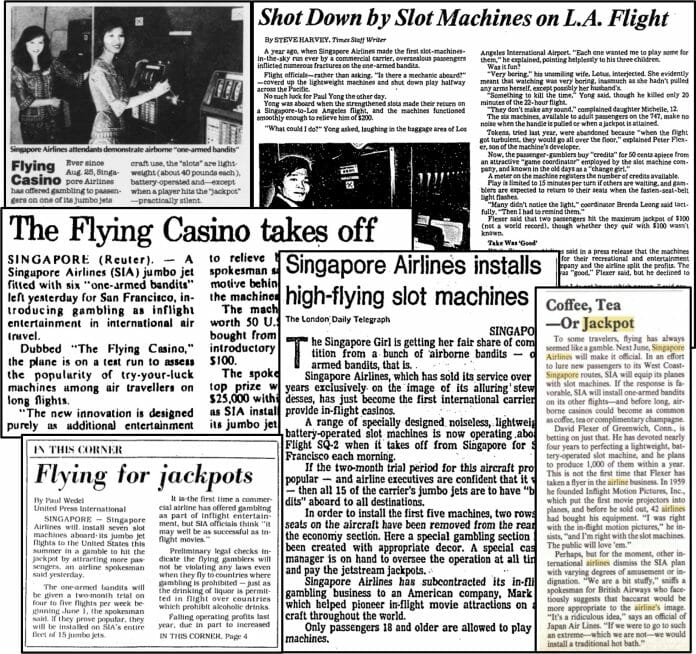 Today, Orchard Rows is a distant memory, relegated to two short lines on a display at the SIA Training Centre. While it’s possible to play Blackjack on Singapore Airlines’ inflight entertainment system, all bets are off as it’s virtual stakes only.

But it makes me smile to think that, for a brief period, a solitary Boeing 747 was cruising somewhere over the Pacific Ocean, its aisles packed with expectant punters hoping the next spin would bring them fortune.

woah, i’d think you made this up if it wasnt for the pictures, haha! great article

I couldn’t believe it when I saw the display at Inside SIA either!

This is an excellent series(?) of posts. Here, have a few more clicks.

It’s really fun to see what the newspaper archives throw up. I’m contemplating doing a piece on the great PPS cull of 2007 next…

Wouldn’t this be much easier to implement now, with AVOD and a credit card swipe tool embedded in the remote control?

for sure, but i suspect there’s regulatory restrictions at play, plus overall image (maybe SIA doesn’t want to be seen as a gambling airline)

Love this series. Your should turn it into a book!