IHG has quietly hiked the cost of award nights at properties worldwide, as dynamic pricing rears its ugly head.

As you no doubt may have read on the miles and points blogosphere, IHG has devalued its rewards program without any notice.

I suppose the argument IHG will give is that there’s no need to provide notice, seeing as how the program uses fully-dynamic award pricing. IHG has no more award chart as such, and the cost of award nights moves in tandem with cash prices (in theory). LoyaltyLobby pegs the devaluation at 30%, although the actual impact will depend on where you typically redeem IHG points.

When IHG first introduced dynamic pricing in May 2020, the effect was benign, even positive in some cases. This was probably due to the fact it happened just when travel was getting absolutely clobbered by COVID-19, and hotel rates were rock bottom.

I don’t think hotel rates have recovered all that much, but IHG has significantly jacked up the cost of many properties.

With regards to Singapore specifically, I previously pulled some data points back in July 2020. Here’s how the same hotels now compare for a random date in October.

I need to emphasize caution when reading these figures- since award pricing is dynamic, it can literally differ from night to night. I may just have happened to choose a date when the pricing jumped, and it’s possible there are other dates with the same or even lower pricing compared to last year.

For example, I’m able to find 29,000 points per night rates at the InterContinental Singapore, lower than when I searched last year… 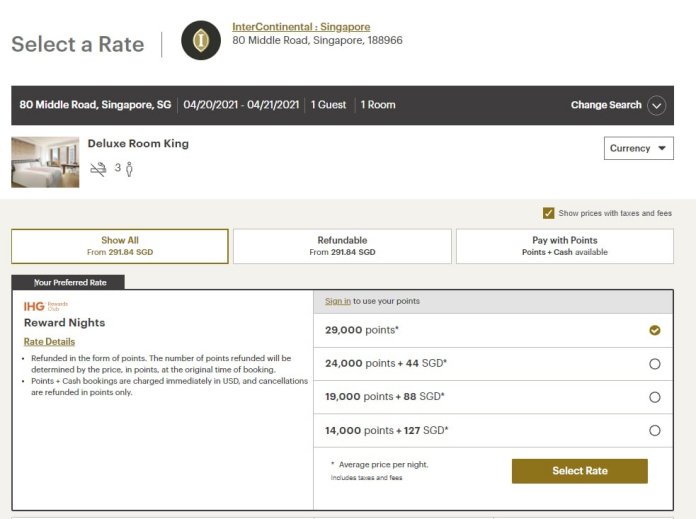 …but it’s also possible to find 75,000 points per night rates during F1 weekend. 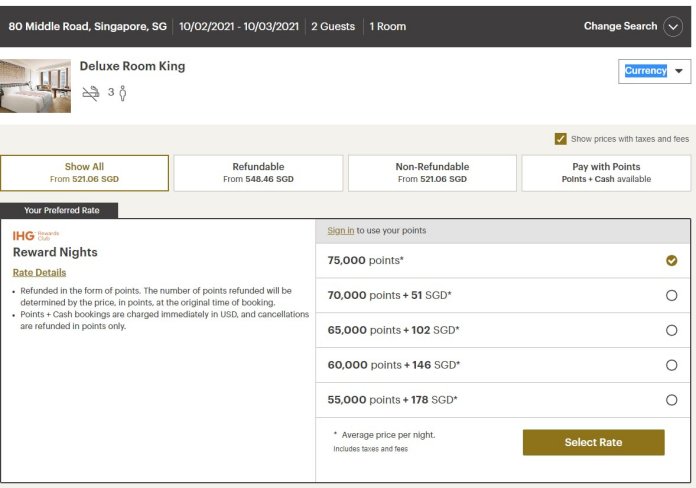 I’m just struggling to understand how the Holiday Inn Express Serangoon can cost 32,000 points on a random weekday, almost as much as the Regent Singapore (35,000 points). As Greg at the Frequent Miler says, it’s like IHG is using a random number generator to price award nights.

I don’t think there’s any doubt a devaluation has happened, but the impact will vary depending on what city you tend to stay in. The tl;dr is that there are now instances where awards get you a value of about 0.35 US cents per point, when the “market rate” previously was ~0.5 US cents and sometimes higher. Of course you can still find bargains, but you’ll have to search a bit harder.

With the loss of PointsBreaks, the introduction of dynamic pricing and this unannounced devaluation, there’s very little reason to be loyal to IHG. It’s still possible to get outsized value when buying points for redemptions, but this little stunt means the need to earn and immediately burn becomes even more pressing.

As a reminder, those holding confirmed reservations are safe; there will be no increase in price beyond what you’ve already paid (however, if you change dates, you’ll be subject to the new increased pricing).

While the experience is charming and the service is great, there's an overwhelming sense that Villa Samadhi has not fully developed its intriguing concept.
Read more

Staycation at the Capitol Kempinski or Capella Singapore? Get free breakfast and a shot at an upgrade with your complimentary LHW membership.
Read more