Search
HomeWhat is the value of a mile?

What is the value of a mile?

The entire miles game pivots around one fundamental question: what’s your valuation of a mile?

That’s because your valuation of a mile underpins every action you take, whether it’s paying a 3% foreign currency transaction fee, choosing between 5% cashback on Shopback and 3 miles per dollar on KrisFlyer Spree, or spending your miles at 0.66 cents each on KrisPay. You can’t make any of these decisions without a clear picture of what a mile is worth.

Unfortunately, there’s no black and white answer here because the value of a mile is subjective. And although there’s some maths we can do to establish the upper and lower limits, where you fall within that continuum is entirely dependent on you.

Ever since I started The Milelion in 2015, I’ve been using a 2 cent valuation in my calculations. But a lot has happened since:

In light of this, I think the existing 2 cent figure needs a refresh, and in this post I’ll talk about how I came to my new valuation. Keep in mind, this isn’t a purely mathematical exercise- the valuation of a mile is as much art as it is science. Some people will disagree with my valuation, and that’s just fine. More important is that you come away with a figure that makes sense for you.

How do we value a mile?

Setting the floor for our KrisFlyer mile valuation isn’t that difficult. We know that SQ’s Pay with Miles function allows you to pay for revenue flights with miles at a value of 1.02 cents each.


Needless to say, this is terrible value, but at least it tells us that we shouldn’t accept anything less than 1.02 cents for our miles.

It also means that you can’t lose if you’re able to acquire miles for anything less than 1.02 cents each- it’s basically arbitrage.

Similarly, finding the ceiling value of a mile isn’t difficult. The ceiling should be the maximum possible value you could get for a mile based on the most expensive revenue flight available*. This works out to be around 7 cents (see working below).
*this is a theoretical maximum because of the implicit assumption that you’d otherwise have been willing to pay cash for this flight, but it still helps set the ceiling


So we know the value of a mile must fall between 1 cent and 7 cents. Where do we go from there?

One way of thinking about the value of a mile is to consider the price at which you can buy them. For the record, here’s a rundown of all the ways you can currently buy miles in Singapore:

What’s remarkable about this table is the extent to which it’s grown over the past few years. Back in 2015, many of these options didn’t even exist.

In light of these developments, it’s very hard to argue that people should be paying 2 cents per mile anymore. I personally wouldn’t pay anything more than 1.8 cents based on where the market is right now.

The other way to think about the value of a mile is to consider the value a mile “buys” when used for an award ticket.

The general formula is

It’s important to highlight the limitations of this calculation:

Award tickets can be cancelled for a small fee (except Spontaneous Escapes), while the cheapest revenue tickets are usually non-refundable. This added flexibility should increase the value of a mile, but we can’t objectively model it.

The above calculation ignores the miles earned on your revenue ticket. But those miles have a value, and this technically reduces your redemption value (because of the opportunity cost of forgoing those miles).

What are my realistic alternatives?

If I used the above formula for a First Class flight, I’d get a value of roughly 6-7 cents per mile. However, I can’t say that I value my miles at 6-7 cents each unless I’d have otherwise paid for First Class out of pocket.

To put it another way: you’re walking down the street and someone gives you a 10% off coupon for Tiffany. You go to Tiffany and buy a $10,000 diamond ring and say “wow, that coupon was worth $1,000!” That’s mathematically correct in one sense, but wrong in another unless you’d have bought the Tiffany ring anyway.

Similarly, if your alternative to redeeming a flight is to buy a budget ticket, then your redemption value is lower because, realistically speaking, the expense your miles are saving you from incurring is lower.

Long story short, this methodology isn’t perfect, but it at least gives you the range within which the redemption value of a mile must fall.

To calculate this, I took three destinations from each of SQ’s award zones* and looked at the value per mile in Economy, Premium Economy (where applicable), Business and First (where applicable) Class redemptions.
*except Zone 5 and Zone 8, which only have two cities each 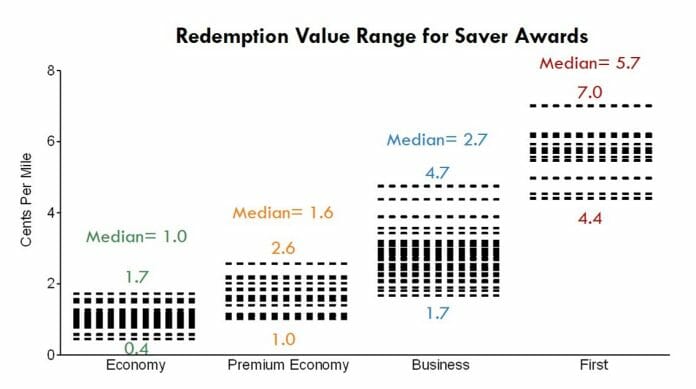 …and for Advantage awards 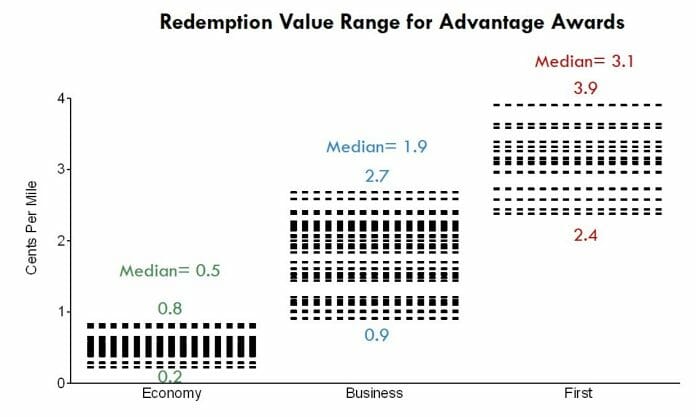 Given that airfares have generally fallen over the past four years while award prices have increased, it’s not surprising that the value per mile has come down since the last time I looked at this.


The table below summarizes the seven different ranges, depending on cabin and award type.

At the same time, although I always look to redeem Business or First Class where possible, I’m certainly not in a position where I could pay for those out of pocket. This means it’s probably an overestimate to look at Saver valuations, and a more realistic figure would be closer to Advantage pricing.

Based on this, my gut feel is that I’d look for at least 2 cents per mile when redeeming miles.

Bringing it all together

To summarize what I’ve said so far: I won’t buy miles for more than 1.8 cents, and I won’t take less than 2 cents when redeeming them.

Why the gap? Because we need to account for so-called “non-cost” factors. There’s an unspoken cost in playing the miles game:

I simply have no way of putting a price on these, which is why I think it’s best practice that you set one figure for buying miles, and another, slightly higher one for redeeming them. Otherwise, it’s as if you implicitly understate your cost.

For what it’s worth, here’s what other sites have to say:

Keep in mind that these websites are based overseas, and their valuation will naturally be different based on the opportunities to acquire and use KrisFlyer miles in their country.

At the risk of sounding like a broken record, you shouldn’t take my valuations as the final word. The valuation of a mile is inherently personal, and depends on your individual travel patterns and preferences.

Nonetheless, it’s an exercise you should frequently revisit as the market changes- the miles game isn’t static, and your valuations shouldn’t be either!

Citi PremierMiles Card
Get up to 45,000 miles with $9K spend in first 3 months
Offer Expires: Mar 31, 2022
See All Offers
Offers may only apply to new-to-bank customers. Read T&Cs for full details.