Is UOB’s points rounding policy as bad as it seems?

UOB rounds all transactions down to the nearest S$5 when awarding points. But this policy doesn't affect all credit cards equally!

If you’re a UOB cardholder, you’re probably unhappily aware of UOB’s rounding policy, which can lead to lost points on every transaction.

Does this mean you should simply avoid using UOB cards for any transaction that doesn’t end with a 0 or 5? Well, it’s slightly more complex than that. While UOB’s rounding policy is generally customer-unfriendly:

In this post, I’ll show you how the rounding policy can be terrible for general spending cards, yet relatively benign for (most) specialised spending cards.

Let’s first look at how UOB’s rounding policy can be extremely punitive with general spending cards.

Suppose you hold a UOB PRVI Miles Card, which awards points as follows:

UOB advertises the earn rates as 1.4 mpd for local spend, and 2.4 mpd for FCY spend.

But thanks to rounding, your effective earn rate can be quite far off. Consider the following transactions (all in SGD, for the ease of illustration):

The first thing you should note is how UOB’s rounding can hit twice. For example, a S$9.99 transaction is first rounded down to S$5, which earns 3.5 UNI$. But since UOB doesn’t award partial UNI$, this is further rounded down to 3 UNI$, equivalent to 6 miles- an effective earn rate of just 0.6mpd!

tl;dr: if your transaction is ≥S$40, you generally don’t need to worry about rounding on your UOB PRVI Miles or UOB Visa Infinite Metal Card, insofar as it’ll still outperform any 1.2/1.3 mpd card with a more generous rounding policy.

However, for smaller transactions that don’t end in a 0 or 5, you might be better off using a Citi PremierMiles or DBS Altitude Card instead. 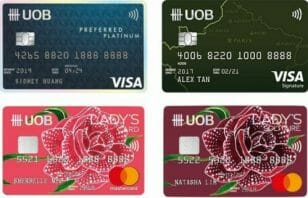 For specialised spending cards, we need to draw a distinction between those which:

A summary of UOB’s specialised spending cards is provided below.

To illustrate, consider the UOB Preferred Platinum Visa, where base and bonus points are rounded and awarded on a per transaction basis.

Then consider the same set of transactions:

Because of the higher earn rate for the UOB Preferred Platinum Visa, you’re losing as much as 20 miles on each transaction to rounding.

It’s a much different story for the UOB Visa Signature and UOB Lady’s Card/Lady’s Solitaire Card. These award 1X base points when the transaction posts, and 9X bonus points the following period.

Using the UOB Visa Signature as an example, here’s how the same set of transactions will be processed:

But the 9X bonus points are relatively unaffected. At the end of the relevant period (either calendar month or statement month, depending on the card), all eligible transactions, including cents, will be summed up. The consolidated figure is then rounded down once to the nearest S$5 before the 9X points are calculated.

All this wouldn’t be an issue if they simply awarded points per S$1 (OCBC is equally guilty of this too, I should add), but hey, it wouldn’t be UOB if it were straightforward.

At least UOB allows you to get a detailed breakdown of points on a transaction level via the UOB TMRW app (remember: you won’t get bonus breakdowns for the UOB Visa Signature/Lady’s/Lady’s Solitaire card because points are awarded as a lump sum). For more details on how to do this, refer to the article below.

What about the UOB Krisflyer Credit Card? =/

The bonus 1.8 mpd is only posted at the end of the membership year, good luck trying to track that lol. But if the logic holds, the rounding will only be applied on the sum of all transactions.

I’m curious as to what led to such “punitive” policies. Doesn’t simplicity and transparency benefit all parties (UOB and credit card holders)? Really interested in the thought-processes and/or company culture that led to this.

They want to make you spend more to get to the nearest 5 dollar block. Lord knows how many times I’ve donated to Ronald McDonald’s chewren charity cos my meal wasn’t 10 bucks.

you said it right! Company culture- A culture of pulling wool over your eyes and catching you when you are unaware all the while advertising the UP TO rewards in your face. Basically a very transaction culture that oversells and under delivers. Onus is on you to spot the potholes. Just walk into a branch and experience it yourself. haha

What a mess. Just do yourself a favor and forget UOB.