9 things to expect from Marriott’s acquisition of Starwood

(18/3/2016) HERE COMES A NEW CHALLENGER: Anbang offers higher deal for Starwood, threatens to derail Marriott merger. This is good and bad. Good if it stops Marriott from taking over, bad if it leads to a bidding war and inflated price. What’s the first thing someone who overpaid for an asset is going to do when they get it

Turns out everyone was way off the mark about who would buy Starwood. We heard stories of IHG, Hyatt, even Chinese companies, but no one even said anything about Marriott.

So naturally, Marriott announced today it was buying Starwood hotels in a deal worth US$12.2bn. Infographic below 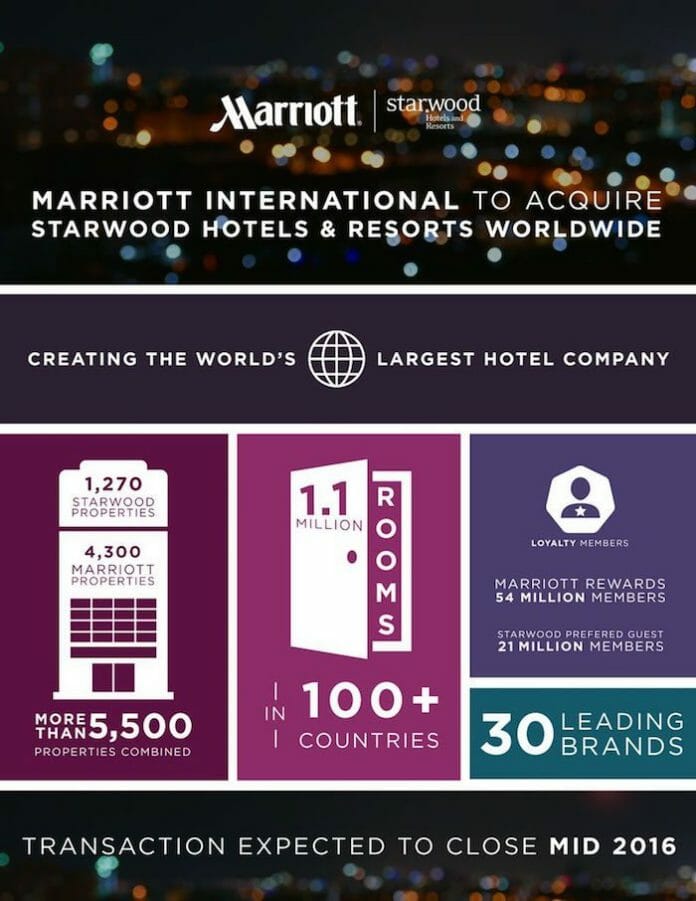 I’m not going to sugar coat it. This is bad for Starwood Preferred Guest members.

Here are 9 things to expect from this acquisition

In my wildest of wild dreams I might say that there would be 2 programs, separately coexisting, like how Ritz Carlton has its own loyalty program despite being part of the Marriott portfolio. But given how many brands are involved in this merger, I think the odds of that happening are close to 0.

According to the experts on Flyertalk, 1 Starwood point is worth roughly 3 Marriott Rewards points. But good luck having Marriott convert them at that ratio. Best case scenario will be a 1:2 conversion, but I think 1:1 is more likely given how the merged entity will be eager to show a lean balance sheet to investors. What better way than to arbitrarily devalue some points and reduce the liabilities section?

I fully expect guaranteed suite upgrades to go away, because on the whole, very few Marriott properties have suites to begin with. I also expect the generous 1:1 transfer of Starpoints to numerous airline FFPs to go away too.

Best case scenario- some of Starwood’s perks are incorporated into Marriott’s program (my guess would be guaranteed 4pm check out, but only for Platinum members). However, on the whole if you are an SPG member you will be worse off.

The deal is only expected to close in mid-2016, and even then I’d be surprised if they merged the 2 loyalty programs anytime before the end of 2016. I think you’d be smart to consider how you can burn your SPG points in the medium-term, but don’t rush to use them.

Marriott (4,300 properties) is simply much bigger than Starwood (1,270 properties). So it’s always been easier to locate a Marriott property than a Starwood.

What’s more, Starwood was lacking a true select-service (read: budget) brand. Although Four Points and Aloft arguably filled that slot, their prices usually didn’t fall below the psychological US$100 a night barrier, and they didn’t have much in way of number of locations anyway.

Marriott has numerous select-service brands- Courtyard, Residence Inn, Fairfield Inn. It’s quite common to find rooms in these brands under US$100 a night. When you’re travelling across the USA, therefore, you’re more likely to be able to find an affordable priced hotel/motel which is part of Marriott.

If you want to see a breakdown of this, there is an excellent piece of analysis on LoyaltyTraveller where he splits the Starwood and Marriott brands by location.

The Starwood Marriott merger brings together a total of 30 brands. There is significant overlap in terms of positioning and I just don’t see management keeping all the brands.

Don’t expect brands like Sheraton and Westin to disappear, but don’t be surprised if brands like Four Points and Element are merged into existing Marriott brands. I also expect the Starwood Luxury Hotel collection to become JW’s.

Marriott offers 3 tiers of Lifetime status, compared to Starwood’s 2. I fully expect Lifetime status as a concept to exist after the merger, but given that Starwood’s benefits are likely to be devalued to be brought in line with Marriott’s, the question is- will it be worth it to earn Lifetime status?

One of the more interesting things about Starwood was their crossover programs, which allowed members to earn more points when using Crossover partners. For example, a Starwood member could link their Delta/Emirates accounts to their SPG account and earn points when flying Delta/Emirates plus enjoy some mid-tier elite benefits (eg priority boarding and check in). Similarly, a Starwood member staying at Caesar’s Hotel properties could also earn points.

Given that Marriott has very different partners (their airline partner is United, for example), it will be interesting to see how this plays out.

Marriott has never been big on their social media presence, especially on Flyertalk. Starwood, on the other hand, has been outstanding. The Starwood FT Lurkers were/are great resources to reach out to for troubleshooting (they’ve helped me on more than 1 occasion). There are about 4 or 5 of them, and the longest-serving one has 5.4 posts per day, ~30k lifetime posts and has been around since 2000, posting nearly every day.

Marriott’s Flyertalk rep has a grand total of 0.24 post per day and was last seen on the FT forums on 17th August 2015.

In case you haven’t guessed by now, I am less than impressed by the outcome of this merger. I was really hoping Hyatt or IHG would be the acquiring party because their loyalty programs are much better. Marriott seems to care comparatively less about customers (and given that they’re so big, why shouldn’t they?), so I don’t see this acquisition being as customer friendly as it is shareholder.

Let’s review this post in 2017 and see how many of these came true.

Register now: IHG One Rewards offering up to 10,000 bonus points

[…] the wake of the news that Marriott is buying out Starwood, a lot of Starwood enthusiasts (myself included) are saying eulogies to the program we once loved […]

What to do with your new Hyatt Diamond membership - The MileLion

[…] Marriott bought SPG, there was a predictable outcry in the frequent flyer community from those (i.e. everyone) who feared […]

[…] that escalated quickly. In response to the very bad news of Marriott buying Starwood, Hyatt saw an opportunity to swoop in and get some of Starwood’s […]

[…] though Starwood is being bought by Marriott, the SPG program should not be affected until 2017 at the earliest. Therefore there’s still […]

Maybe Starwood will be bought over by the Chinese Anbang group instead. Check out the latest news.

yup, i saw it. i’m worried though because this might start a bidding war. and what’s the first thing a buyer who paid too much for an asset is going to do?

SPG Ritz/Marriott can now status match with each other!

Have heard that Marriott’s Gold programme is pretty decent, so might proceed to try put that (comparatively useless) SPG Gold of mine to good use…

i said 1:1. what a pessimist i am. 1:3 is better than i could have hoped for. can’t think of any marriott property offhand that I’d like to stay at, though I’m sure some of those ritz carltons are mighty nice