Yes, we heard you!

Until recently the DBS LiveFresh was one of the more interesting cards out there because it allowed you to earn both points and cashback, thereby appeasing people on both sides of the aisle (although we all know that it is a truth, universally acknowledged, that anyone who prefers cashback to miles is loopy). 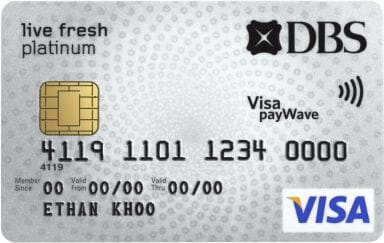 With the DBS LiveFresh, you earned 3X DBS points (or 1.2 mpd)  + 5% cashback (this 5% sometimes went up for limited time promotions) on online transactions. I use the past tense because effective 1 December, DBS will convert the LiveFresh card to a cashback-only card and cease offering DBS points. 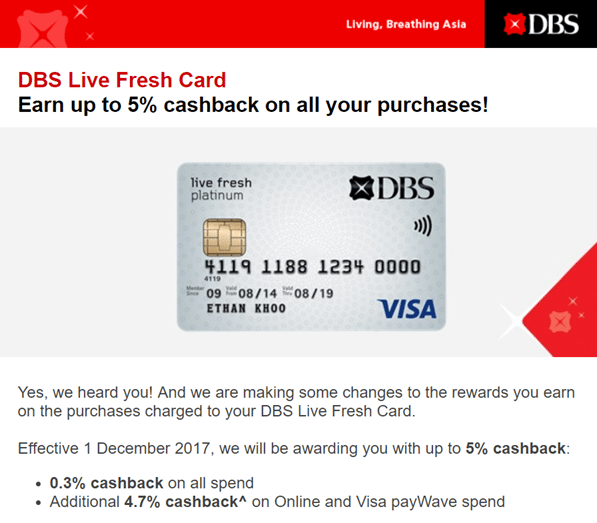 How does DBS determine what is an online transaction? I’m sure those of us who own the Woman’s card would like to know. The FAQ aren’t too helpful in that respect:

Based on my experiences with the Woman’s card you’ll need to carefully monitor your online transactions to ensure that the DBS backend properly classifies them. Case in point: I recently appealed to get my Linkedin Premium payments recognised as an online transaction so I could earn 10X on the Woman’s World card. I asked whether this approval meant that going forward I wouldn’t need to keep appealing but was told that so long as Linkedin didn’t change their “system indicators” I’d have to keep sending in requests manually. I thought that was absurd, really, and also customer unfriendly.

DBS explicitly excludes iPayMy and Cardup from earning cashback (see Point 9 in the FAQ), as well as the usual exclusions of donations, government services payments, AXS/SAM, educational institutions etc. Interestingly, Paypal transactions are explicitly given the green light (Point 11) so long as they don’t fall under any of the exclusions in Point 9.

Why this change rubs me wrong

I don’t even use the LiveFresh card but there are two things that deeply annoy me about what has happened.

The first is the way they’ve phrased it. “Yes, we heard you!” is like airlines calling devaluations “enhancements” or Delta trotting out the disingenuous line that they did away with award charts because “we listened to customers and they told us that they didn’t use them”.

I’m pretty sure customers didn’t say “Please remove points earning from the card because I love cashback and points are offensive to me”. In fact, it’s not like DBS added some other feature in exchange for taking away the 3X points. At best you can say they reduced the minimum spend required for bonus cashback from $700 to $600 (but they also reduced the cashback cap from $70 to $60). So this to me is a pure devaluation without any mitigating factor, and that line about “hearing you”, throwaway as it may seem to whichever marketing person wrote it, is just insulting.

The second is the lack of notice. This circular is dated 28 November and the changes take effect from 1 December. Two days of notice isn’t best practice at all. Your LiveFresh card ceases earning DBS points on 1 December, but if you transact before 1 December and the transaction posts after 1 December you won’t earn any DBS points. This is another reason why I find the late notice to be poor form, because it’s entirely possible that some people made transactions today/yesterday that will post after 1 Dec (foreign merchants in particular can be slow to post transactions- my Lifemiles purchase took 4 days to show up)

Here’s something else that you might find interesting. Take a look at the old T&C, uploaded to Dropbox in case it gets taken down from DBS’s official site. There is a section that talks about the 5% cashback promotion and details the terms and conditions.

The question I then have is this: can DBS cut the cashback cap to S$60 before 31 December? I mean, fine, there is this handy catchall term that gives them the power to do so

But as vince123123 says on the LiveFresh thread on HWZ, it’s one thing to have a clause and another thing about it being legally enforceable. Even if this clause is valid, it’s very poor form to change the terms without notice.

Again, I’m not directly impacted by this, but I can imagine there will be more than a few disgruntled DBS LiveFresh cardholders out there tonight.

This is pathetic from DBS, following up from the pathetic garbage they served up with the Spend and Redeem as well as the Snappy Deal promotions (tl;dr version: Qoo10 error meant $1 items released for sale early, sales cancelled before sale started but stock was never replenished – can say it is a Qoo10 problem, but DBS is still ultimately responsible for their promotion). Do note that this change is effective for transactions POSTING on or after 1 Dec, therefore the effective cutoff to earn the points is probably tomorrow (29 Nov). Therefore, this is effectively 1 days’ notice. A… Read more »

The amount of rubbish they have served up in the past few weeks is unacceptable. At this rate, if you sent DBS people into a brothel, they’d come out sucking their own thumbs.

we can disagree on how banks should be conducting their affairs, but let’s try and keep the conversation civil please.

Just on the DBS Woman’s card, I have experienced the same when paying for the monthly Netflix fees. DBS’ customer service says that I’d need to keep on asking them to credit the bonus points manually…

These sorts of concerns are why I’ve been holding off getting DBS cards! I don’t have all that much time to micro-manage and their customer service sounds pretty appalling.

Actually , this year when there was a mass update on the terms and conditions some where in the middle of the year , there were also many changes in terms which seemed to be changed retrospectively ..example the visa paywave for netsflashoay top up for 5% cashback..meaning the terms applied before the date of announcement and there was no date or announcement recorded ..only with updates from forumner that we were able to confirm with each other ….it’s a good idea to keep it in Dropbox …the changing of terms will catch many people off handed Had to dispute… Read more »