I realise IKEA design is something that polarizes people (for what it’s worth, I like it. Then again, I also wear crocs), but thankfully there’s one thing we can all agree on: more miles is good.

In that spirit, you might like to know that between 1-11 March, OCBC is offering 12 mpd on the first S$1,000 you spend on your Titanium Rewards card at IKEA. This excludes purchases made under the OCBC 0% installment payment plan, purchases made on IKEA’s online store and purchases made at the IKEA restaurant and cafe (which interestingly enough, implies that the restaurant and cafe has a different MCC from the rest of IKEA and can finally put to bed that question of whether you should be using a dining card over there).

Some folks might be disappointed at the exclusion of the IKEA restaurant and cafe, but I see nothing stopping you from buying IKEA gift cards (which, when bought in store, will earn 12 mpd) and using them to purchase food and drink in the cafe. Gotta think outside the box, people. 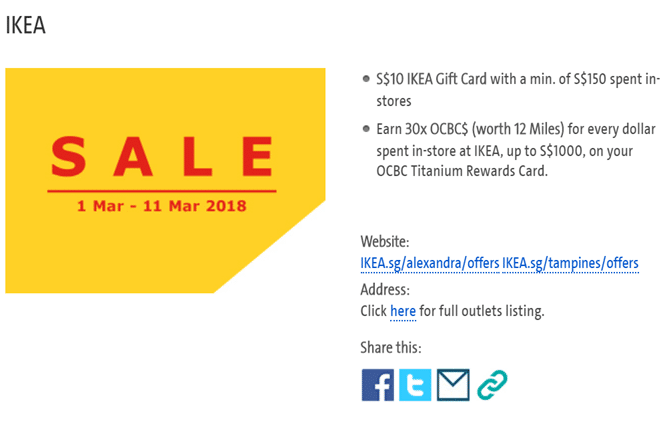 Everything else bought in the physical IKEA stores at Tampines and Alexandra is fair game. The full T&C of the 12 mpd promotion can be found here. Nothing really to flag, just remember that it’s capped at S$1,000 of spending. If you have both the pink and blue versions, you have a cap of S$2,000 total.

I’ve checked with the OCBC team, and although you can use your Titanium Rewards card with mobile payments to pay at IKEA and earn the 12 mpd, you cannot stack this with the current 10X promotion for mobile payments . In other words, no 12 mpd + 4 mpd, just 12 mpd maximum.

The OCBC Titanium Rewards card is my to-go card for all general spending right now, thanks to the wide acceptance of mobile payments and the ability to earn 4 mpd on what would normally have earned me 1.2-1.4 mpd on a general spending card. Remember- the 4 mpd on mobile payments promotion lasts till 31 Dec 2018 (will it be extended? We can hope) so it’s not too late to apply for a card now.

Aaron Wong
Aaron founded The Milelion to help people travel better for less and impress chiobu. He was 50% successful.
Previous articleGet your tickets now for the Milelion’s Miles Masterclass
Next articleThe Healthpoints proposition, or how many steps would you walk for miles?

The MCCs for Ikea cafe and restaurant are both indeed under dining category. I received 8% cash rebate for Citibank Cashback credit card under the ‘Dining’ category.

Oooh that’s good to know. Thanks for the data point Naro!

Can confirm as well. I used my Amex AU card there once, Amex’s portal allows me to check the merchant classification on their online portal

Of course subject to a max of 120,000 OCBC$ per card anniversary right?

No. the 12 miles per dollar awarded for this promotion does not count toward the 120,000 OCBC$ per card anniversary

Good to know that thanks!!

Does it mean that even though I’ve nothing to buy at the moment, I should just buy a gift card up for $1000 to earn the miles 1st? Then spend it slowly…

I guess that would make sense. But how long is credit in a gift card valid for?

Just bought $1000 worth of gift cards earlier today at Ikea Tampines! Eligible for the $10 gift card, redeemed at the OCBC kiosk!

How long gift cards are valid for?

If you use it, the gift card doesn’t expire. But if the card is inactive for 2 years, it will expire.

I checked with 2 staffs separately. It’s only valid for 2 yrs, no matter what.

Arrghhhhh just spent on Ikea without realising this ;( thanks anyway need to spend again…

Ya, got the bonus. however, limited to 1 per person.

[…] T&C of the promotion can be found here. OCBC has run 12 mpd promotions before, most memorably the one at IKEA. ZALORA’s appeal is probably more limited than IKEA’s, but hey, if you’re going […]