Qantas is running a promotion for its Qantas Frequent Flyer members where you will be able to earn twice the usual Status Credits when you register for this promotion and book your flights with Qantas from now until 14 August 2018. Flights booked prior to these dates will not qualify for the double Status Credit promotion. You must be a member of the Qantas Frequent Flyer program before registering for this promotion.

The travel period for flights booked during this promotional period is from 21 August 2018 to 2 August 2019 which is extremely generous of Qantas in my opinion.

You must register for this promotion and book your flights with Qantas by 9:59pm 14 August 2018 (Singapore Time).

This double Status Credit promotion with Qantas is an excellent opportunity to acquire elite status in the Qantas Frequent Flyer program much quicker. There are many Qantas operated flights ex-Singapore so you will definitely have a chance to fly with Qantas.

Here’s how many Qantas Status Credits you will require for elite status in the Qantas Frequent Flyer program and the corresponding oneworld status you will earn:

Do also note that you have to fly a minimum of 4 flights on a Qantas, QantasLink or Jetstar flight before status is awarded.

The cheapest flight to Sydney with a domestic connection on Qantas is currently priced at S$839 over a random date range in October 2018 and this falls under the “Economy Sale” fare category in the above table. A direct flight on the cheapest fare available on the same dates will set you back S$1,033. 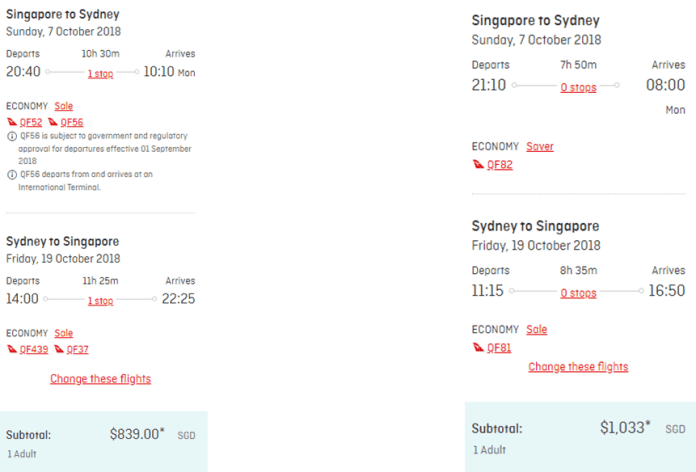 Qantas awards Status Credits based on each flight segment flown and you will earn an additional 10 Status Credits for the short hop from Brisbane to Sydney on the outbound and on the Sydney – Melbourne leg on your way back to Singapore.

If your pockets are a little deeper, booking a Premium Economy Class or Business Class flight to Sydney will cost you around S$2,408 and S$4,012 respectively. A return Premium Economy ticket booked under the Premium Economy fare category will already earn you Qantas Frequent Flyer Silver as you will earn a total of 300 Status Credits for the return flight. These numbers are assuming that you choose to fly with a domestic connection in Melbourne or Brisbane.

Over in Business Class, you will earn a total of 640 Status Credits which will almost earn you Qantas Frequent Flyer Gold.

Here’s how much it’ll cost you per Status Credit point should you decide to do a status run with Qantas to Sydney:

It might actually be worth taking a single Business Class flight to Sydney with an internal connection to earn 640 Status Credits actually, given that the cost is relatively marginal to Economy Class – and you’ll be flying Qantas’s Vantage XL product on the A330s. But of course, S$4,000 is no small sum of money.

The cheapest Economy Class fare I could find to Qantas is actually to Perth and you will earn 100 Status Credits for a return flight which costs approximately S$580 over a random date in November 2018. On a cost per status credit basis, choosing to fly to Sydney would cost you less per status credit earned.

If you’re afraid of orphan miles arising from your status runs with Qantas, fear not as Qantas Frequent Flyer is a transfer partner of Citibank and should it be required, you can easily top up the miles needed for a redemption flight by transferring points over.

Some great uses of Qantas Points are that they can be used for a redemption for an Emirates flight and this would set you back approximately 144,000 Qantas Points for a one-way First Class redemption to London Gatwick via Dubai. Qantas prices out awards based on flight segments and if you are able to book the QF1/QF2 direct flights to London, it will cost you 85,000 Qantas Points in Business Class.

Just be aware of the high fuel surcharges and taxes you might have to fork out for award flights on Emirates and Qantas.

This is a great promotion which Qantas is running which comes quite soon after a similar promotion earlier in the year. Personally, I will not be making status runs as I don’t travel frequently enough to make full use of the perks which come with oneworld elite status.

If you find city pairs which will yield a lower cost to attain status with Qantas, do sound out in the comments section!

Matthew Chong
Addicted to luxury travel while trying not to go broke, Matthew is always on the prowl for the best deals in the travel industry. When he's not busy studying, he can be found trawling the internet and reading up on credit cards, airlines and hotels. He also wouldn't mind taking you out on a date.
Previous articleCitibank’s new rewards exclusion categories: what you need to know
Next articleCitibank PremierMiles Visa switches lounge provider to (a watered down) DragonPass

They also have an offer for bonus credit of transferred points from credit cards:
“Right now, you could receive 20% more Qantas Points. Simply transfer your credit or charge card reward points to Qantas Points before 31 August 2018 to take advantage of this limited time offer.*”

Ooh. Can you send the link please?

That depends on the fare class of your ticket.

Thanks! Just changed an upcoming work trip from SQ to QF. QF Platinum in one return trip! Woohoo!