Your roundup of airfare sales

Here’s a roundup of some of the airfare sales that are going on:

Malaysia Airlines is currently holding their “Travelicious Deals” sale which runs from now until 27 August 2018. The travel period for tickets booked during this sale is from 14 August 2018 – 30 June 2019. Tickets must be booked on the Malaysia Airlines website.

In this sale, there are great Economy Class fares to destinations such as Australia, Beijing, Seoul, and London just to name a few. Fares to London start from S$920 in Economy Class and fares Korea and Japan could be had from as low as S$521.

Good value Business Class fares on Malaysia Airlines are also available with prices to Tokyo, Osaka, and Seoul starting from S$1,531 and S$3,610 to London-Heathrow.

Click here to book your tickets with Malaysia Airlines

Emirates is currently holding its Travel Sale where great Economy Class fares are on offer to almost all of Emirates network of destinations. This sale is currently ongoing and will end on 27 August 2018. The booking period for fares to Australia is from now until 23 August 2018.

The travel period for all tickets booked under this promotion is from end August to 31 March 2019.

Business Class fares are also on sale with fares to Sydney starting from S$3,588 and Europe from S$4,499.

Emirates’s fleet comprises of mainly Boeing 777-300ERs(77W) and Airbus A380s and both of these aircraft fly between Singapore and Dubai as well as from Singapore to Australia with Economy Class on both of these aircraft laid out in a 3-4-3 configuration. I would strongly advise you to pick the flight on an A380 if possible as a 3-4-3 layout on a 77W can be quite tight.

KLM is holding its Autumn Hot Picks sale which runs from now until 21 August 2018. Concurrently, they are also holding a sale for their flights to Bali which also runs from now until 21 August 2018. Fares booked during this sale to Europe and other destinations in the Autumn Hot Picks sale as well as to Bali are valid for travel from 15 August to 30 April 2019. Tickets must be booked on the KLM website.

There are some great fares in the Autumn Hot Picks sale with Stockholm starting from S$800 and Berlin from S$811. Bali is going at a very good price starting from S$199 which is one of the cheapest we’ve seen KLM sell tickets to Bali at.

Here’s the full list of fares which are available for booking:

In conjunction with the NATAS fair happening on the weekend of 18 August 2018, Etihad is holding a sale which runs from now until 22 August 2018. All tickets booked during this sale have a travel period from now until 31 March 2019. Tickets must be booked on the Etihad website. 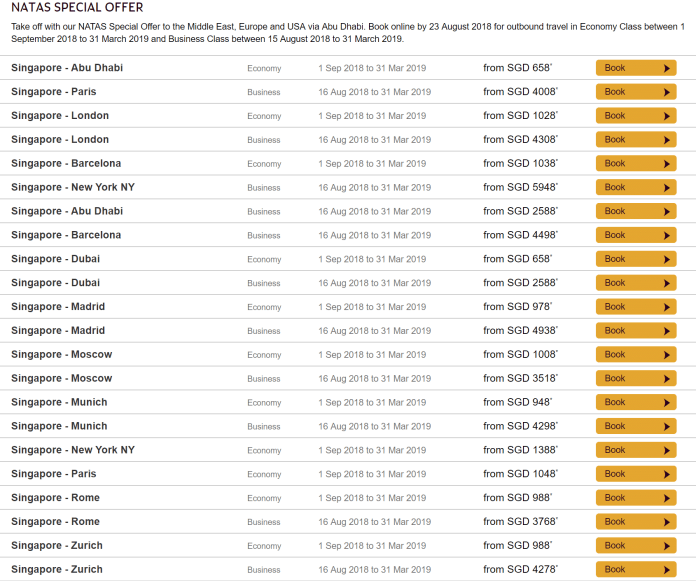 Here are the different sales which they are concurrently having as part of the Summer Sale: 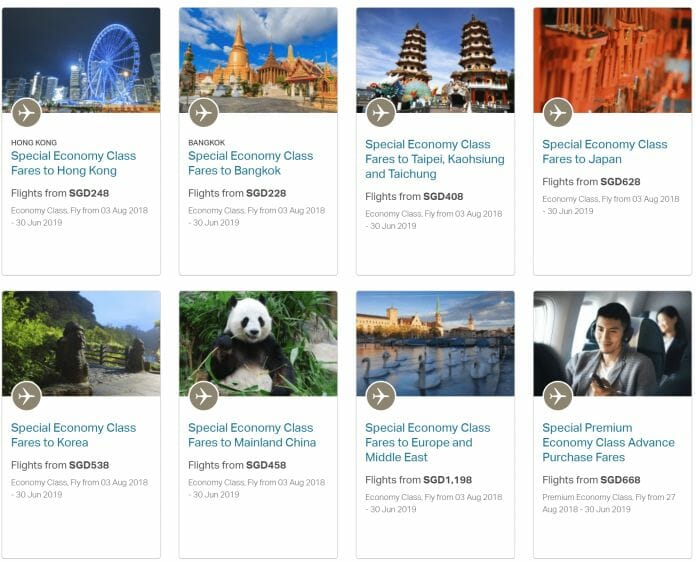 Some Cathay Pacific sale tickets will not earn you any miles in the Asia Miles program so be sure to check your fare conditions before proceeding with your booking.

Click here to book your tickets with Cathay Pacific

Here’s the full list of destinations on offer for Economy Class:

Here’s the list of destinations available as part of their Premium Economy fare sale:

These are rather attractive fares which LOT is giving, especially in Economy Class with all fares starting below S$1,000.

LOT flies their Boeing 787 aircraft between Singapore and Warsaw with Economy Class in a 3-3-3 configuration.

There are great fares on offer through to the end of the month and if you or your friends and family members are searching for cheap Economy Class tickets, now is a good time to start your search.

If you are unsure which cards you can use to maximize your returns from the purchase of airfare tickets online, you can refer to the table below:

Matthew Chong
Addicted to luxury travel while trying not to go broke, Matthew is always on the prowl for the best deals in the travel industry. When he's not busy studying, he can be found trawling the internet and reading up on credit cards, airlines and hotels. He also wouldn't mind taking you out on a date.
Previous articleLounge Review: Plaza Premium First Hong Kong- pay an upcharge for a better lounge?
Next articleFinnair flights are now available for redemption on Alaska Mileage Plan

Hi! Apart from finnair, would you happen to come across fares from Singapore to Reykjavik? I can’t seem to get any from Singapore airlines. Wrote in to inquire.

Yeah cause SQ doesn’t fly there. So you’ll have to grab a flight from places such as London or maybe Helsinki if that’s nearer.

True that Matthew. But LH and SAS from *A does so it should be bookable but we know… state of the art booking system SQ has ;p