KrisPay's latest update means there's finally a reason to have the app on your phone. Earn up to 2 mpd at selected merchants.

One glaring weakness of KrisPay ever since it launched in July 2018 has been the lack of an earning function.

KrisPay’s “burn only” nature and dismal 0.67 cent valuation of KrisFlyer miles meant it was only useful for those who wanted to cash out their miles…and stop interacting with the KrisFlyer program. I stated at the time that this made KrisPay more of a “disengagement” rather than “engagement” tool, a puzzling strategy from Singapore Airlines.

Well, that’s about to change, as KrisPay rolled out an app update today which adds the ability to earn up to 2 miles per dollar at 27 out of 33 merchants. 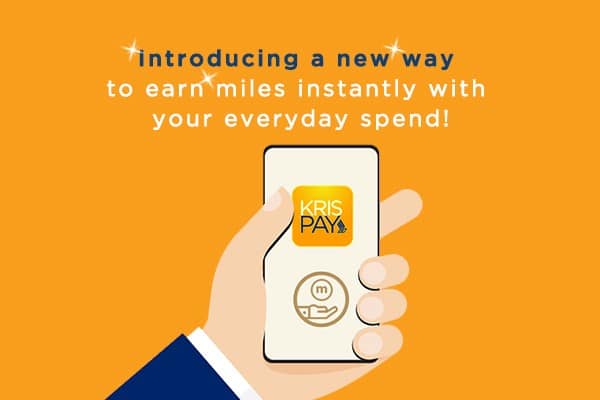 How earning miles with KrisPay works

Eligible merchants can be identified by a symbol in the top right hand corner. After tapping on the merchant, you’ll see further details about the earn rate. 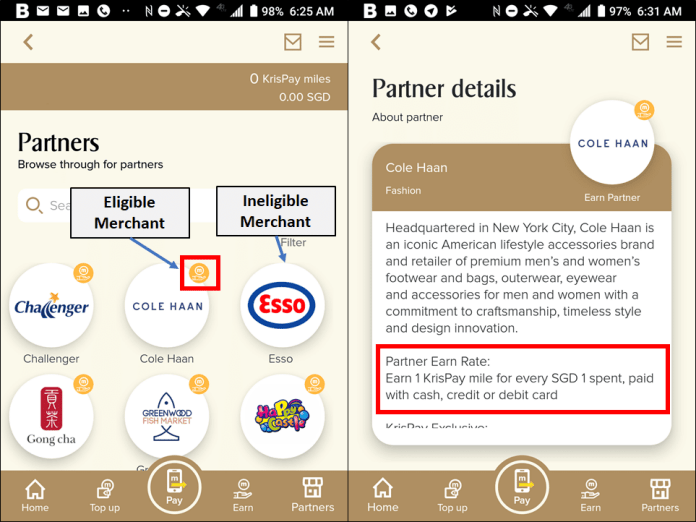 You make payment at the merchant as per normal, with cash, credit or debit card. Remember- you’re not paying through the KrisPay app, so there’s no question of “what is the right card to use with KrisPay”. Use whatever card you would normally use, depending on the merchant type.

After payment, tap on the the “Earn” tab on the KrisPay app and enter the amount you spent. This generates a QR code for the cashier to scan, which will instantly credit the corresponding KrisPay miles to your account. 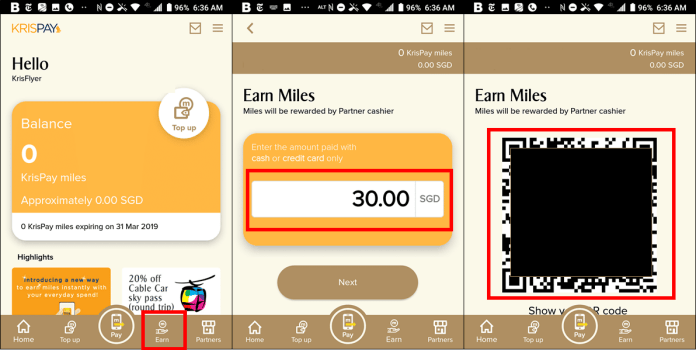 Now the fun part: the KrisPay miles you earn through transactions do not need to be kept in your KrisPay account. They can be transferred to KrisFlyer at a 1:1 ratio within 7 days of the transaction.

If for whatever reason something possessed you to spend part of the KrisPay miles earned, a partial transfer is not supported and your miles will be stuck in KrisPay (and quite frankly, serves you right).

Earn up to 2 miles per dollar at selected KrisPay merchants

KrisPay miles will be rounded down to the nearest whole number. For example, if you spend $7 at a merchant earning 1 mile per $2, your total earning will be 3 miles, not 3.5 miles.

You will get to double dip through KrisPay, earning miles both from the KrisPay app as well as your credit card.

Here’s the full listing of merchants and their mpd rates:

The following merchants do not award any miles

One might be tempted to argue that awarding 0.1 mpd (Challenger) is as good as not awarding any miles at all.

Should you use KrisPay now?

To spend your miles? Absolutely not. 0.67 cents per mile is still a dismal valuation, and nothing in the app update has changed that.

But it costs you nothing incremental to earn miles via KrisPay, so if you don’t use it you’re just leaving value on the table. The instant crediting means KrisPay could be the fastest way to top up your KrisFlyer account if you’re just shy of the miles needed for a redemption.

Once again- there is no “right” card to use with KrisPay. You should use whatever card earns you the most miles on that particular transaction.

What does this mean for Mileslife?

From a strategy point of view, KrisPay’s addition of an earning function represents an encroachment into Mileslife’s space.

Mileslife certainly has the edge in terms of merchants- KrisPay has a paltry 33, while Mileslife has more than 600 restaurants, plus many more activity, hotel and retail partners in Singapore and overseas.

That said, it’s no secret that Mileslife would like to expand its retail footprint, and it’s a no-brainer that Singapore Airlines will be pushing the KrisPay team to grow their F&B presence. In my opinion, it’s only a matter of time before the two start competing more directly.

This creates an interesting conundrum: Mileslife exists at Singapore Airlines’ pleasure. If SQ so wanted, they could switch off the spigot and there goes Mileslife’s most important earning partner in Singapore (yes Mileslife has a further 15 partners, but it’s virtually impossible to operate in the Singapore miles game without KrisFlyer).

Such an anti-competitive move would certainly be bad PR for the airline, although there are certainly more subtle ways of doing it (e.g. increasing the cost at which it sells miles to Mileslife to the extent that it becomes uneconomical). I can’t think offhand of any other market where an airline-backed retail facing miles app coexists with a third party solution.

To be clear: this is purely speculation. There is nothing to suggest that this is the plan. Moreover, you could also argue that Mileslife’s success is beneficial to Singapore Airlines in the sense that the more people use the app, the more demand there is for KrisFlyer miles and the more revenue generated for SQ. The Mileslife team does the legwork to build the merchant ecosystem, freeing up resources on the SQ side.

If you take that point of view, the only way this becomes an issue is if KrisPay becomes a vanity project, which management wants to succeed at all costs. Still, I can’t believe SQ would go through all that expense just to be satisfied with a 33 strong merchant list.

We’ll have to wait and see, but I’d definitely be interested to see how this plays out.

This update means that KrisPay finally has a viable use case, and that I’ll need to update all my KrisPay-related joke material (What’s the difference between KrisPay and a firefighter? The firefighter earns while he burns [Firefighters do burn things to create firebreaks to stop fires from spreading] (I never said the material was any good)).

Go update your app, but please don’t spend any miles on waxing.

Aaron Wong
Aaron founded The Milelion to help people travel better for less and impress chiobu. He was 50% successful.
Previous article
World of Hyatt announces partnership with American Airlines
Next article
UOB has relaunched their Lady’s Cards, and they’re actually not terrible

You mentioned that currently there is no overlap, however , I found that ” wings of time” is available on both krispay and mileslife.
So does that provide a possible triple dip opportunity??

No, because wings of time on Mileslife is prepaid. You buy the ticket on Mileslife then go down. If you use Krispay, you go down, pay, then scan qr

With Grab offering a “160 KrisFlyer Miles for 1400 GrabRewards” (resulting in a 1.14mile/dollar spent via GrabPay) and a rapidly extending selections of merchants and food outlets accepting GrabPay, I’d feel like they deserve an honorable mention on the above article too 🙂

(Yes, Grab Rides may still result in a better redemption value, but I get my >20% discounted rates from Lazada in a regular basis)

you mean in the sense that grabpay competes with krispay? i think they do, but definitely not in the proximity that krispay and mileslife compete in. krispay and mileslife reward you with exactly the same currency. grab gives you their own currency which has many uses, one of which is miles

Yeah, that’s what I meant, though you have a fair point.

Grab offering 1.14 mpd at ~3000 merchants island wide PLUS 3.2 mpd for the first $200 of AmEx Ascend spend/month (the Amex/Grab Promo) sounds indeed worth an honorable mention when you’re talking about the hand full of merchants KrisPay has.

Many banks start or will start to award nothing to grab topup. So GrabPay slowly becomes useless as no additional awards for topup.

Which bank apart from BoC?

CIMB Platinum stops awarding additional 9.8% due to MCC change, though you still can earn by manual topup. I am sure sooner or later, Grab will use the same MCC for all topup. Citi Rewards V/M has reports of missing rewards, too.

I can’t be certain, but if GrabPay topup MCC changes to Stored Value Facility(and it should be), I can foresee that DBS/Citi etc will soon stop awarding as GrabPay is managed as a financial institution.