World of Hyatt and AAdvantage members to receive reciprocal benefits when staying at a Hyatt hotel or flying with American Airlines.

At present, Marriott Bonvoy has its RewardsPlus partnership with United where Marriott Bonvoy members who attain Titanium Elite status will be able to enjoy a complimentary upgrade to United MileagePlus Silver status which in all honesty, isn’t a status that is particularly useful if you don’t have frequent travel with United.

Fresh off the press, World of Hyatt has just announced a new partnership with American Airlines. The actual date of as when this partnership will go “live” is still unknown.

Here’s what we know about the new partnership:

It’s interesting that only Concierge Key members will be given a straight status match to Globalist status, which is the highest elite status in the World of Hyatt program. In the press release that was sent out, it mentioned that AAdvantage Platinum, Platinum Pro, and Executive Platinum members, and Explorist and Globalist World of Hyatt members will also have the opportunity to participate in limited time status challenges.

For AAdvantage, the main perks most of you will be utilizing will be the benefits associated with oneworld Ruby, Sapphire, or Emerald unless you have frequent travels on American Airlines. While no details about the requirements for the status challenges have been released, you will receive status while you complete the challenge which is great news.

Here’s a brief summary of what benefits each oneworld elite status will receive: 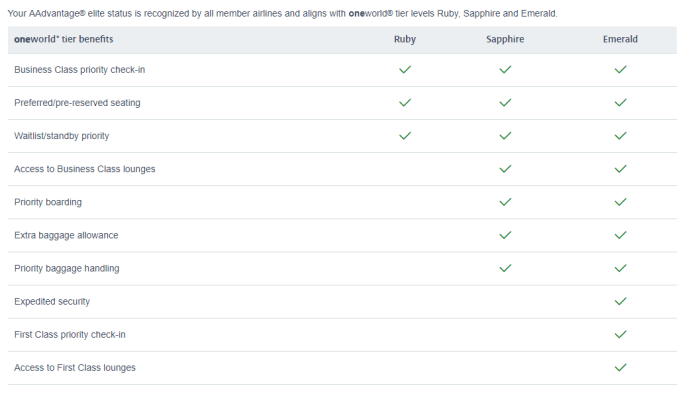 Admittedly for those who do a lot of premium cabin travels, the real tangible benefit of elite status would be that you will be able to guest a friend who is flying in Economy (poor him) into lounges as well as the extra baggage allowance.

It’s great to see World of Hyatt and American Airlines form a new partnership and providing an opportunity for a status match. Hyatt has been making a lot of changes to its program recently, including a devaluation, and this new announcement is definitely a much-appreciated one.

Of the legacy US carriers, the only carrier which does not have an official hotel partnership would be Delta. Who knows, maybe we’ll see a surprise announcement from Hilton, IHG, or maybe even Accor about a new airline partnership.

Matthew Chong
Addicted to luxury travel while trying not to go broke, Matthew is always on the prowl for the best deals in the travel industry. When he's not busy studying, he can be found trawling the internet and reading up on credit cards, airlines and hotels. He also wouldn't mind taking you out on a date.
Previous articleBook Hyatt Prive rates at Hyatt hotels through Mileslife
Next articleFinally: KrisPay allows you to earn KrisFlyer miles at selected merchants