Maybank has increased the minimum transfer blocks for its airline partners, and is nudging customers to its awfully-reviewed TREATS SG app.

Maybank has made some changes to its TREATS rewards program, increasing the minimum transfer blocks for all four partners and adjusting the transfer ratios depending on transfer method.

KrisFlyer users in particular will need to transfer a minimum of 10,000 miles (versus 5,000 miles before), and use the TREATS SG app for the most favorable transfer ratio going forward.

Until recently, Maybank TREATS points could be converted at the following ratios:

These transfer blocks were notably smaller than other banks out there, which generally adopted minimums of at least 10,000 miles. The result was greater flexibility; for example, you could transfer 35,000 KrisFlyer miles from Maybank, but if you had Citibank or DBS cards, you’d either have to do 30,000 or 40,000 KrisFlyer miles.

Unfortunately, Maybank has now increased the minimum transfer blocks, and added differential rates depending on how you transfer your points.

There’s still good flexibility for Asia Miles, Enrich and AirAsia (although there’s absolutely no reason to redeem your TREATS for the last two), but KrisFlyer transfers now require a minimum of 10,000 miles, on par with most banks. Admin fees remain the same at S$26.75 per transfer, regardless of the number of points transferred.

Now let’s talk about the transfer method. Currently, all transfers to Asia Miles, Enrich and AirAsia BIG must be done manually. Customers fill up a form to register their frequent flyer account details, then another one to indicate how many miles to transfer.

When it comes to KrisFlyer, however, there are three options:

Maybank is presumably keen to get people using its TREATS SG app, and hence offers the best transfer ratio to those who go down that route.

After all, there’s nothing people want to do more than download yet another app to their phone, especially one with a 1.9★ rating on Google Play and a laundry list of complaints about hanging and crashing. 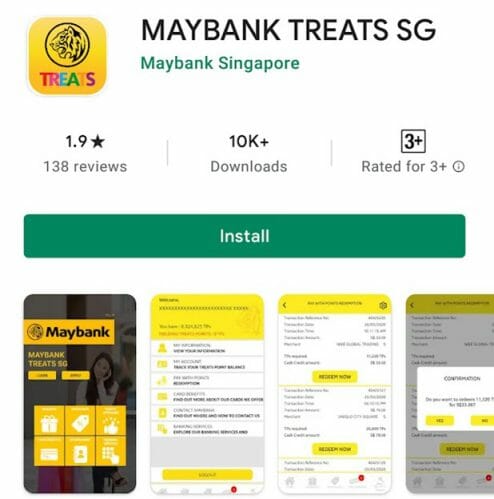 But if you don’t play ball, you’ll pay a higher price of 25,600 points when redeeming through the online rewards portal, and 26,200 points via the manual form.

To put things in perspective, the Maybank Visa Infinite earns 3 TREATS points per S$1. That’s the equivalent of:

For what it’s worth, Maybank is rolling out this carrot and stick approach to other rewards options too. For example, a S$20 CapitaVoucher will cost 6,700 points, 7,300 points and 7,900 points when redeemed via the TREATS SG app, online rewards portal and manually respectively.

With Maybank’s latest changes, only the OCBC VOYAGE (1 mile), OCBC 90N (1,000 miles) and AMEX Platinum Cards (250 miles) have sub-10,000 minimum transfer amounts. Of course you want to transfer as many points as possible at one go to minimize transfer fees, but having smaller transfer blocks allows you to do it with great fineness.

Having to use the TREATS SG mobile app shouldn’t be a big deal in and of itself, although the reviews indicate you’re liable to run into some annoying bugs. If only companies would make proper investments in their apps before forcing customers to use them…

Aaron Wong
Aaron founded The Milelion to help people travel better for less and impress chiobu. He was 50% successful.
Previous article8 random observations from my latest Royal Caribbean cruise to nowhere
Next articleTrip.com weekend sale: Hilton Singapore from S$100 nett and other deals

What’s a minor annoyance to miles chasers? After all, we dealt with BOC’s archaic systems when they lured us with good earn rates…

indeed, but i don’t think maybank has anywhere near the chops to convince miles chasers to put up with that. its best card is the horizon, and even that is outperformed by other options