The ANA Suite Lounge is closer to a Business Class than a First Class experience at the moment, though it's still comfortable enough.

SQ12 from Singapore to Los Angeles had a 90-minute layover in Tokyo Narita, which gave me a rare opportunity to peek inside post-COVID Japan (well, the airport at least).

There’s no two ways about it: Narita is a ghost town. With Japan’s borders remaining closed to the world, the airport is running on a skeleton crew. All the restaurants are closed. The immigration counters are silent. Entire sections of the terminal are dim.

Only a handful of duty-free shops (including Tax Free Akihabara with its Japanese snacks and curios) remain open, because if there’s one thing a pandemic can’t kill, it’s overpriced cosmetics and liquor.

All shops close promptly at 6 p.m, though the last flight currently departs about 90 minutes after that anyway.

In any case, my goal during the layover wasn’t to shop, but to visit the ANA Lounge and see how COVID had affected operations.

ANA is only operating two lounges at Narita Airport for now- the ANA Suite Lounge and ANA Lounge, both at the No. 5 Satellite near Gate 53.

Fair warning, Gate 53 is quite a hike from Gate 27, which Singapore Airlines normally uses for SQ12. Budget at least 10 minutes to walk each way.

Both lounges are open from 7 a.m till the departure time of the last ANA-operated flight for the day (7.20 p.m on the day I visited).

Access to the ANA Suite Lounge is available to:

Here’s the interesting thing though. I was travelling with my dad, who has Solitaire PPS status. He was invited to the ANA Suite Lounge, despite the fact that Solitaire PPS members are, for all intents and purposes, garden variety Star Golds outside of Singapore Airlines. I was able to tag along as his +1, so I’m not complaining.

I’ve been to the ANA Suite Lounge a couple of times pre-COVID, when it was always packed to the brim. How strange to see it virtually empty now, with no more than five people at any time (insert your own MMTF joke here).

I had the run of the house when it came to seating, which in the ANA Suite Lounge is mostly solo- as suggested by the privacy dividers. Families can take a pod of four lounge chairs near the windows, but in general you get the sense that this setup was created with individual travellers in mind. There are no dining tables either, which makes eating a little tricky.

That said, the lounge has excellent views of the tarmac, and a great place for plane spotters. 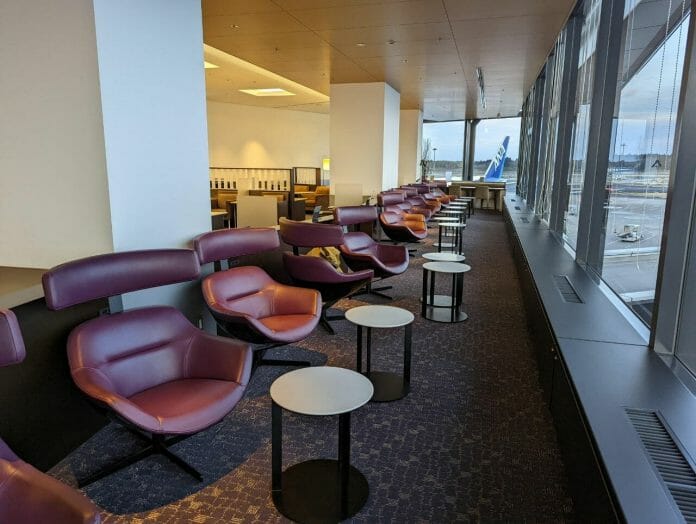 Unfortunately, I forgot to do a speed test of the ANA Suite Lounge’s Wi-Fi connection, but with the lounge virtually empty, speeds were as zippy as the airport’s public Wi-Fi network.

Somewhat surprisingly for an international airport lounge, the power plugs were all Type B outlets instead of universal ones. There were no USB charging ports available either.

As an aside, do remember that Japan operates on 100V, and not the 240V we have in Singapore. This won’t be an issue for laptop charging bricks, but plugging in other kinds of electronics might lead to issues (though I can’t really think of what else you’d be bringing along with you!).

The lounge has a business centre with four private work cubicles and a photocopier/printer/fax machine; yes, they still use fax machines over there. 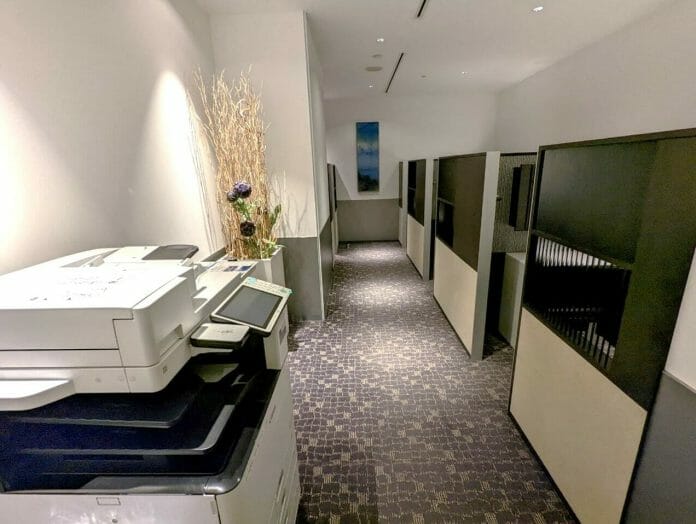 Each work cubicle had its own monitor (~32 inch, by my estimate), a pair of headphones so you could listen to music without disturbing others, and a Type B power outlet.

F&B in the ANA Suite Lounge comes from two main areas: the buffet, and the Noodle Bar. Before COVID, there were Chef Service Hours, where a chef would whip up nigiri (with mixed reviews), but that’s been suspended for now.

ANA publishes a full list of what’s being served in the lounge each month, which you can access here.

Given the how hygiene-conscious the Japanese are (I mean, wearing masks was a thing there even before COVID), I was surprised the buffet (1) was self-serve (2) didn’t offer gloves.

Hot food is available at the Noodle Bar, which despite the name, serves up rice bowls and burgers too.

In terms of drinks, there was the classic Asahi self-pouring beer machine (temporarily out of service), a coffee machine, plus a soft drinks dispenser.

The wine selection comprised of:

They’re all perfectly serviceable wines, though not likely to set the world on fire.

A selection of sake and Shochu was available as per the menu below.

The lounge has a total of 10 shower rooms (shared between the Suite and regular lounge), available on a first-come-first-serve basis. It was tricky to secure one pre-COVID, but obviously there was no wait this time.

Water pressure was decent, although not the strongest I’ve ever had. I think there’s a flow-limiter built into the plumbing.

A total of three semi-private sleeping pods were available in the lounge, though one was labelled as out of service. These featured either recliner or massage chairs, with a hook for hanging jackets.

On the whole, I’d say the ANA Suite Lounge a comfortable enough place to rest and refresh between flights, but if you brought me inside and didn’t give me any context, I’d be hard-pressed to tell if this were a First or Business Class lounge.

I mean, there’s nothing wrong with it per se (lack of dining tables aside). The F&B selection is decent, shower rooms have a few fancy touches, and there’s places to snooze or catch up with work. However, there’s nothing you could say about this lounge that you couldn’t also say about any other decent Business Class facility.

Perhaps the return of Chef Service will provide a point of differentiation, but until then, passengers who get sent to the regular ANA Lounge shouldn’t feel too much FOMO.

Aaron Wong
Aaron founded The Milelion to help people travel better for less and impress chiobu. He was 50% successful.
Previous article
My experience with the simplified VTL arrivals process in Singapore
Next article
Which travel insurance policies covers miles and points bookings?

great review! Would be great to know what is the difference between Suite lounge and regularly lounge 🙂

Was the 90 mins layover for SQ12 sufficient or a rush to visit the longue and buy some tokyo banana?

it was a rush, because the lounge was quite far from the gate that sq12 landed at. probably had 20 mins there, tops

ANA Suite Lounge at both NRT and HND has always been a Solitaire perk. It’s one of the rarities in the program. It would be nice if more 1st Class lounge reciprocity exited across *A partners but alas….