OCBC has launched a new promotion for sign-up offer on the OCBC 90°N Visa Card that runs from now till 31 August 2022.

This is limited to the first 10,000 eligible applicants, either new or existing (the cap is so high, I wonder why they even bothered putting one in the first place- all it does is deter would-be applicants). 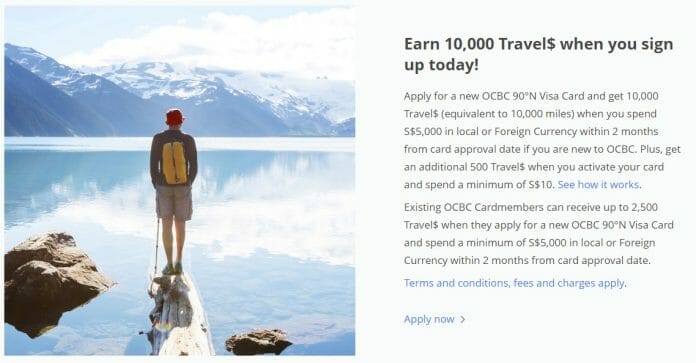 However, the key issue is that the core value proposition of the OCBC 90°N Visa remains weak, due to its S$5 earning blocks and mediocre earn rates.

To be eligible for this offer, customers must apply and be approved for an OCBC 90°N Visa Card from 1 June to 31 August 2022.

They must also be among the first 10,000 applicants to meet either one of the criteria below.

New customers who spend at least S$5,000 by the end of the third month after approval will receive 15,500 Travel$ (1 Travel$= 1 KrisFlyer mile), broken down as follows:

Existing customers who spend at least S$5,000 by the end of the third month after approval will receive 7,500 Travel$ (1 Travel$= 1 KrisFlyer mile), broken down as follows:

It’s basically an incremental 0.5 mpd, which makes the overall earn rate 1.5 mpd. But you could already earn 1.4 mpd from competing cards like the UOB PRVI Miles, with no minimum spend required!

When must the spending be made by?

The minimum spend requirement must be met by the following dates:

Therefore, you’ll have anywhere from 2-3 months to meet the minimum spend, depending on when the approval comes through.

Qualifying spend refers to in-person or online retail transactions, excluding transactions such as:

The full list of non-qualifying spend can be found in the OCBC 90°N Visa’s overall T&Cs.

When will the bonus miles be credited by?

The T&Cs for this offer can be found here.

The OCBC 90°N Visa earns a rather mediocre 1 mpd on local spend and 2 mpd on foreign currency spending. This makes it the lowest-earning miles card on the market right now (other entry-level miles cards have local earn rates of 1.1-1.4 mpd).

There are some bonus categories such as 3 mpd on streaming services, and 1.5 mpd on online food delivery, online shopping and groceries, but you could always earn up to 4 mpd with alternatives like the Citi Rewards or DBS Woman’s World Card.

To be sure, there’s some bright spots: Travel$ never expire, and can be transferred to KrisFlyer with no conversion fees and a minimum of just 1,000 Travel$.

The existing customer offer is more clear cut: don’t bother. An incremental 0.5 mpd which requires at least S$5,000 of spending to trigger is asking too much, and you’d be better off just using a superior miles card to begin with.

Hello – I got a credit card application denied recently despite meeting the minimum salary x6. They mentioned that is it due to the fact that I have applied to too many cards over the last 18th months. Is there a way around this?