A Day In The Private Room: Trip Planning

A chance to put Singapore Airlines' flagship First Class and The Private Room lounges to the test under real-world conditions.

Singapore Airlines has taken the wraps off its new First Class and The Private Room lounges, capping a S$50 million multi-year renovation.

While there’s still some minor touch ups to come in the next few weeks (I’ve been told that the decorative lights in the First Class dining hall were delayed), the project is for all intents and purposes finished. These will be Singapore Airlines’ flagship lounges for the next decade, until Terminal 5 comes.

There’s been a lot of buzz in the comments section and Telegram group as people weigh in- some positive, others less so. I have a lot of thoughts to share as well, but before I do, I figured I should actually visit the lounges under real-world conditions.

In planning this trip, there were two things to consider

With regards to (1), I need to be on a Suites or First Class flight on Singapore Airlines to access The Private Room. A Star Alliance partner wouldn’t cut it (not that SWISS or Lufthansa release First Class award space out of SIN anyway), nor would Solitaire PPS Club status.

That already limits you to a handful of destinations, as shown below.

I also intended for this to be a quick trip, and didn’t want to bother with testing or quarantine requirements.

That made Jakarta the best option (Indonesia has not required pre-departure testing ever since 18 May, and waives the visa requirement for ASEAN nationals). With a block time of just under 2 hours, it seems like an odd place to operate a First Class cabin- until you realise how premium-heavy the route is, and how some wealthy folks wouldn’t be caught dead slumming it in Business Class!

Singapore Airlines operates up to five daily flights to Jakarta, but only three of them offer a First Class cabin.

Before I decided which flight to take, I had to figure out what time I wanted to come to the airport.

Now, Singapore Airlines allows passengers to check in up to 48 hours before departure, and while I might have done that in my younger, crazier days, I’m a married man now and try to minimise the time spent away from The MileLioness as much as possible.

I thought about arriving the afternoon before, but decided against it. Even though The Private Room has day rooms with beds, guests are only entitled to two hours of continuous usage. I didn’t want to roll the dice on sleep, plus it wouldn’t be right to deprive another passenger of an overnight spot just so I could do my little review. I did consider booking an airside hotel, but both the Aerotel and Ambassador Transit Hotel were fully booked for the night in question.

So I settled on SQ968, which worked out nicely. I’ll arrive early in the morning, try all three meal services in The Private Room and see how the First Class buffet changes throughout the day, work from the lounge and sneak in an afternoon nap during the lull period. It won’t be “a day” in the 24 hour sense, but it’s close enough!

For my Singapore to Jakarta leg, I paid 27,500 KrisFlyer miles + S$52 in airport taxes for a First Class Saver award.

Getting back to Singapore was trickier, since there was no award space on any SQ flight the following day (even in Economy). I had assumed that Jakarta would have plenty of cheap flights to Singapore, but the best I could manage was a Scoot ticket for S$255 (yes, I looked at all kinds of permutations including skiplagging).

It’s going to be a trip of extremes then: out in The Private Room and First Class, back in a cramped seat with Nasi Lemak available for purchase at S$17.

SQ968 is operated by a Singapore Airlines B777-300ER, which 2013 First Class seat I’ve reviewed both pre- and post-pandemic.

However, I’d be very curious to see what First Class service routines look like on an ultra short haul flight like this, as well as what amenities passengers can expect. The inflight menu shows a full dinner service with caviar, which should be fun. 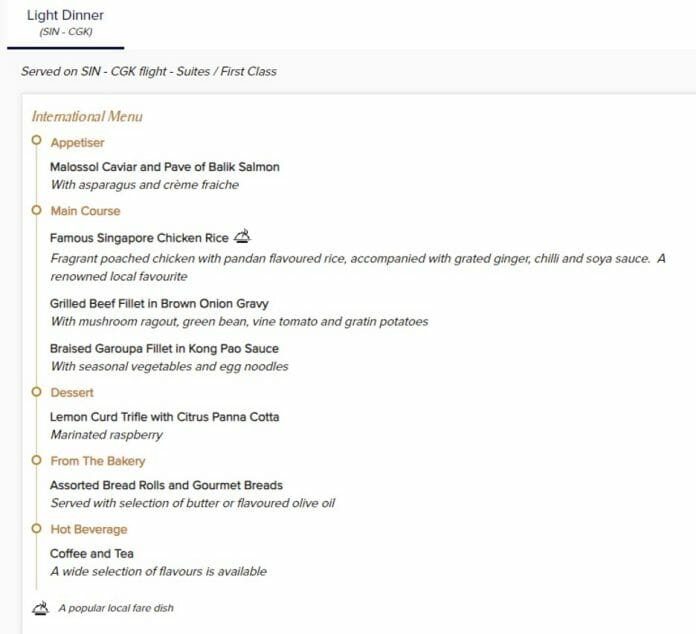 No, I don’t think we’ll get a sleeper suit.

I’m in Jakarta for less than 12 hours, so all I need is a bed to crash on. I settled on the Jakarta Airport Hotel, which requires a terminal change that hopefully won’t be too difficult.

With any luck my APEC card will expedite the immigration process, allowing me to quickly reach the hotel after landing.

Even though The Private Room is Singapore Airlines’ “true” First Class lounge, you shouldn’t feel obliged to hang out there the whole time. The First Class Lounge has unique features of its own, like the flagship bar and live cooking stations, and if nothing else, offers additional space to stretch your legs.

I’ve already done detailed writeups of both lounges based on the media preview, but this will be a chance to see them under real-world conditions and observe the various SOPs they have in place for things like the day rooms and showers.

In Jakarta, my Priority Pass will let me visit either the Saphire APS Blue Sky Lounge or Saphire Blue Sky Lounge (never mind the naming confusion; how do you misspell Sapphire like that?).

But there’s one lounge I’m more keen to visit: the Saphire Plaza Premium Lounge, which isn’t available through Priority Pass, even before their acrimonious breakup in July 2021.

Fortunately, I have a Dragon Pass courtesy of my CIMB Visa Infinite Card, which will get me in (I could also get in with my AMEX Platinum Charge).

They say you shouldn’t criticise a man before walking a day in his shoes, and by that token, you can’t critique a lounge until you’ve spent a day in it!

While the experience will no doubt evolve over the coming months as the staff find their feet and procedures are refined, this will hopefully give you a better idea of what to expect if you’re travelling in the next few weeks.

If there’s anything you want to know about the lounge experience, drop a comment below and I’ll do my best to investigate!

this lounge is closed in CGK terminal 3 (where SQ departs) i know because i was there last week and couldnt find any lounge with my priority pass.

Thanks for the heads up. Good thing I got my Dragon pass then…

the plaza premium lounge has nice views of the tarmac …and that’s where the fun ends. Drinks at the bar only beer and wine, food ……..not edible

Hmm. 52k points for a killer date. I’m seriously considering this. Just need to find a way to stuff the kids for the weekend

Seriously considering this too, beats going for an overpriced staycay

Yeah, it’s not bad if you think about it. Provided the other half doesn’t mind bringing her passport along…

To save on your return, you could’ve flown domestic to Batam, and taken a ferry to Tanah Merah from there!

ha! not at the hour i’m landing, surely

Don’t forget to bring the blacklight.

I’m doing SQ968 too! Hopefully your field report comes in before my trip.
I am going to time it nicely and do a couple conference calls to try out the experience.

Thank you for doing the review. In real life, I doubt anyone who is flying suites will go to the airport 24 hours before just to use the facilities. Perhaps mile chasers who is doing a redemption and wanting to squeeze out every bit of value to justify it. At that point, it’s just sad . Time is money! 😆

Agreed, I don’t think anyone’s idea of fun is spending a day in a lounge, unless you’re the kind that is going to eat 5 meals a day, steal the cutlery, and the sugar packs, and the soap just to get his “money’s worth” from the redemption to CGT he has worked so hard on public transport to redeem. I guess Aaron is doing this for science, but I hope that in doing so he doesn’t pander to people on his telegram group who have nothing better to do.

Hi, if I were you, I’d BTC Japanese kaiseki meal selection. Yes, request to start with caviar before jumping to kaiseki meal. The main courses selection is nothing to shout about!

It sounds like a fun mini trip. I’m excited to visit the lounge in a couple of months, was pretty disheartening to read all of the critical reader comments about it in your other post. Do you think they’d allow two people into one of the sleeper lounges? Also, is there any area to store bags while I shop or wander around in the airport for a bit? Thanks!

sleeper rooms are strictly 1 pax only. the bed is a single mattress, the recliner is a single seater. i think they would also prefer that people didn’t join the mile high (ground high?) club in the rooms

Hi Aaron, Would be keen to find out how access to TPR works for arriving passengers as per your previous post i.e. whether it is a “non-published benefit” that is certain, and logistically how it works with the need for checked-in luggage collection at the belts if an arriving passenger were to visit TPR since it is before immigration gates. Thanks.

Aaron Wong
Author
Reply to  Will

there is no doubt about access on arrival. the only issue is how long you can realistically stay, if you have a bag waiting for you at the carousel. if you wait too long, it will be collected by the ground handling staff and sent to unclaimed bags. you can still retrieve it, but it might be a hassle.

I will be flying F inbound Sunday in a week, arriving in the early morning, will give it a try

Never mind TPR; the question is will chicken rice still remain on the inflight menu in June? Or will it now be roasted chicken instead?

for information, there is an airport hotel right at the Terminal 3 itself in Jakarta Airport. It’s called Anara Airport Hotel

yes! am trying to shift my booking there instead

Would you have considered flying CGK-SIN in F, and get to enjoy the lounges in both CGK and Private Room?

Do you think i can bring my teens kids (economy) to enter first class lounge, and just leave them there, then me and hubby enter the private room ? If yes, how many times they are allowed to join with us to re enter the lounge ? lets say we have over 15 hours in changi hahhaaa