All you need to know about the DBS Vantage's hefty sign-up bonus, including strategies to score up to 108,400 miles in the process.

After years of toying with the idea, DBS has finally made its debut in the $120K credit card segment with the launch of the DBS Vantage. This premium metal card will spearhead its efforts to capture the mass affluent segment, and give incumbents like the Citi Prestige and OCBC VOYAGE something to think about.

As part of the launch blitz, DBS is offering an 80,000 miles sign-up bonus on the DBS Vantage.

Let me state upfront that “80,000 miles” is a misnomer. Of this figure, 25,000 miles comes from paying the annual fee (thereby more akin to buying miles rather than earning them as a by-product of spending), and the actual bonus depends on whether you’re a new or existing customer:

That said, 80,000 miles is how the bonus is being marketed, so I’ll just use it as shorthand throughout this article.

While it’s not quite the 100,000 miles sign-up bonus we saw with the StanChart X Card, it’s still a great offer by all accounts. The only catch is the short timeframe to apply (by 27 June, unless you qualify for an extension to 8 July- see below), which is clearly a FOMO tactic- though frankly speaking, I’d much rather a short timeframe than a “first X” style offer.

In this post, I’ll walk you through everything you need to know about the DBS Vantage’s sign-up bonus, including qualifying spend, when to expect your miles, how to take home up to 108,400 miles in total, and what to do if you can’t see the DBS Vantage listed in your ibanking application portal.

This bonus is on top of whatever base miles you normally earn with the DBS Vantage:

You must enter the promo code VTMILES when applying. No code, no bonus! The promo code field can be found towards the bottom of the application page, under the “DBS Marketing & Promotions Materials” section.

You will have 60 days from the date of card approval to clock at least S$8,000 of qualifying spend.

For the avoidance of doubt, supplementary and principal cardholder spending will pool when calculating whether the minimum qualifying spend has been met.

Let me deal with the inevitable “does CardUp count?” question. The T&Cs for this sign-up bonus are an exact mirror of the regular DBS Rewards T&Cs, and CardUp transactions have always earned base points and counted towards sign-up bonuses on DBS cards.

Some will point to term (l) about “payment service providers”, but that exclusion has always been there, and has never been a barrier to earning DBS rewards points on CardUp transactions. There’s absolutely no reason to believe that has changed.

If you’re having a hard time hitting the sign up bonus, some “stored value facilities” which will still count towards qualifying spend are:

When will the miles be credited?

The 25,000 miles for paying the S$588.50 annual fee will be awarded immediately (in the form of 12,500 DBS points) when the annual fee is charged. This happens at the time of card approval.

DBS Points earned on the DBS Vantage expire in 3 years, and can be converted to any of the following frequent flyer programmes with a S$26.75 admin fee.

The thing about sign-up bonuses on most general spending cards that they usually entail some form of opportunity cost.

But the beauty of the DBS Vantage is that it’s offering 4 mpd on dining and petrol till 31 December 2022, capped at S$2,000 per calendar month (the cap is shared between dining and petrol). Therefore, you can minimise the opportunity cost by concentrating as much spend on these two categories as possible.

For example, in a best case scenario, you would get approved in June 2022 so that your 60-day qualifying spend period covers June, July and part of August. Then split your S$8,000 spending like so:

Of course, you need to weigh for yourself whether it’s worth paying the 3.25% FCY fee to clock overseas spending, but even if you did it all in SGD, your total haul as a new customer would be 107,000 miles– not all that different.

Why can’t I apply for a DBS Vantage? 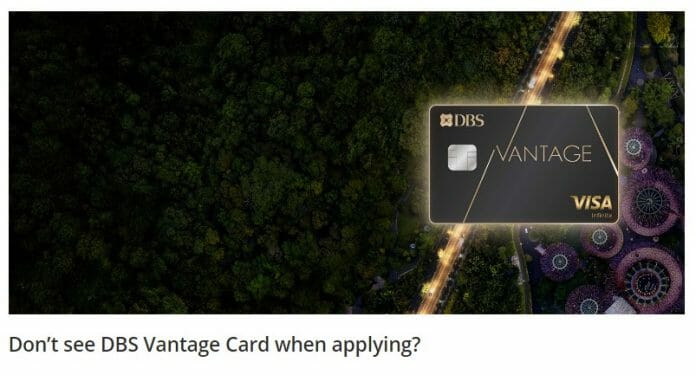 Some existing DBS/POSB cardholders have reported that they don’t see the DBS Vantage as an option when applying via the card application page on DBS/POSB ibanking.

It’s so common a problem that DBS has set up a dedicated landing page to address it. tl;dr: DBS has set up its system in such a way that the DBS Vantage is only visible to those whose income records reflect income of at least S$120,000 per annum (don’t ask me why they did it this way, it seems like extra work).

You will need to update your income records with DBS before you can apply for the DBS Vantage. DBS/POSB customers can visit this link to update their income, which will take five working days to process.

Won’t that cause you to miss the boat on the sign-up bonus? It might, so it’s good news that DBS has pledged to honour the 80,000 miles sign-up bonus for customers who:

This concession will be granted automatically; you do not need to contact DBS.

Another possible scenario is that you see the DBS Vantage in your ibanking, but get an error message “we are unable to proceed with your request as your annual income record does not meet the minimum requirement of S$120,000″ when you try to proceed.

This means that you’ll need to manually upload your income documents to continue your application, as shown below. 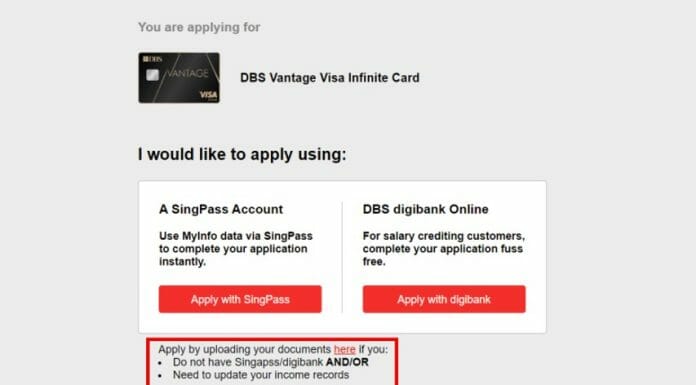 For what it’s worth, I think that if you’ve been considering getting a $120K card, this represents the prefect opportunity to hop onboard since the value of the sign-up bonus can offset a big chunk of the first year’s annual fee (though the argument for switching from an existing $120K card may be more complex- something I hope to explore in an upcoming update of the $120K Credit Card Showdown).

Further FAQs on the DBS Vantage can be found here and here.