Every bank in Singapore offers a card at the $120K level...except the largest one.

The credit card market in Singapore can be roughly divided into three income segments: $30K, $120K and $500K. 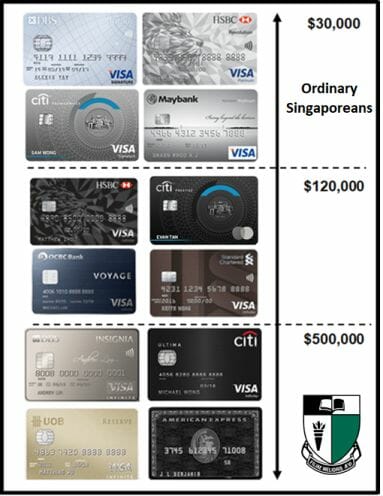 $30K is the MAS-mandated minimum income to get a credit card, so here’s where you’ll find the entry-level offerings. These typically have basic benefits like a handful of free lounge visits, and annual fees can usually be waived without much difficulty.

On the other extreme, you have the ultra-niche $500K segment, where banks pull out all the stops. Benefits are lavish, including free hotel stays, discounted premium cabin flights, exclusive invitations to watch launches and wine tasting dinners, and beck-and-call concierge services. Annual fees are in the four digits (don’t even think about asking for a waiver), and can cost as much as $7,490 a year for the AMEX Centurion.

In the middle, you have the $120K segment, which technically ranges from $120-150K. The benefits here aren’t as insane as the $500K segment- there’s no monthly yacht party or supercar driving experience. Then again, neither are the annual fees. Cards in this segment charge ~$500-650 per year, for which cardholders receive unlimited lounge access, airport limo transfers, discounted hotel nights and assorted dining benefits.

Although there are relatively few offerings in the $500K segment, almost every bank has a card for the $30K and $120K segments. I say “almost”, because I was in the midst of preparing a talk on high-end credit cards when it dawned on me that DBS doesn’t offer a $120K card.

As a recap, here’s a (non-exhaustive) snapshot of the miles and points offerings that each bank has at the $30K and $120K level:

What you’ll observe is that every bank has at least one offering at the $30K and $120K level…except DBS. DBS has mass market $30K cards and the DBS Insignia for ultra high net worth individuals, but its portfolio is strangely silent at the $120K mark.

Although the $500-650 annual fees of the $120K segment may seem high to customers, these cards don’t actually make a lot of money in and of themselves, once rewards and benefits are taken into account. I once spoke to a product manager for one of these cards who told me quite frankly that their goal was to break even.

If anything, $120K cards exist to help cross sell other banking services; they’re effectively a lead generation tool for priority banking. The hope is that new-to-bank customers will sign up for $120K cards and establish a banking relationship that can lead to more revenue from stock trades, retirement planning, insurance sales and investment advice.

DBS Treasures (the bank’s priority banking arm) does indeed have its own credit card in the DBS Treasures Black Elite Card, but it’s clearly not trying to compete with the $120K segment.

The DBS Treasures Black Elite Card sports a $535 annual fee, which is waived so long as the cardholder is a DBS Treasures member. A fee waiver is great, but it also means you can’t expect too much in the way of benefits.

For example, there’s no lounge perks, no private club access or anything beyond the most cursory of hotel and dining discounts. There is a complimentary airport limo, but you’ll need to redeem the equivalent of 5,000 miles for a trip, hardly the best use of your points. Besides, most other $120K cards with a limo service award it when you spend a certain minimum, and don’t require you to use your own points.

At the end of the day, the DBS Treasures Black Elite Card is just a dressed up DBS Black Card, and it’s a missed opportunity for the bank in my opinion.

We know that DBS is perfectly capable of rolling out the red carpet when it has to- just consider the very solid travel benefits it offers private banking customers, like airport limo transfers, priority check-in and even its own airport lounges at Changi Terminal 2 and 3.

So the fact that DBS hasn’t done something similar for the $120K segment suggests it’s more a question of willingness rather than ability. Perhaps they feel the space is over-saturated, or they don’t think they could offer something meaningfully different from other banks. Perhaps their research tells them the space just isn’t that lucrative. Whatever the case, it’s a puzzling omission from Singapore’s largest bank, and only time will tell if that gap gets plugged.

Why doesn’t DBS have a $120K card? I put the question across to a DBS bank executive before, who smiled wryly and said something along the lines of “that is a good question”. Read into that what you will, but as it stands, I’m not aware of any plans to change it.

I’d love to see someone come along and shake up the $120K segment, offering things like complimentary elite status, travel credit, coworking space access, using points to bid for experiences or even quirky perks like free museum access. We have several decent $120K cards as it is, but most of them are focusing on “me-too” benefits like lounge access and limo transfers- important to be sure, but not really a significant point of differentiation anymore.

🤣🤣🤣🤣🤣 even before I could get to your second paragraph!!

why, i have no idea what you’re talking about.

Hey.. I’m calling you out.. This write-up isn’t even a write-up… It a stab that’s disguised as a write-up!

Yes Aaron, this my question too, you are handsome btw~

thank you for this objective truth.

Just something that constantly earn 3 miles per dollar. Ha

Is this another forecast? Hmmmmm

It’s quite straightforward, and you’ve almost got your answer already. For most other banks it is a tool to cross-sell and win high networth relationships. Why would Dbs, the bank with the largest base of customers need it? Rather than competing at risk of not breaking even, it is far more effective to focus their efforts directly on their existing base.

theres not much money to be made on the 120k customer.

and you can be a dbs treasure customer for a meager 200k these days. i guess they just wait till you have a bit more money

I wish DBS could launch a similar card like OCBC N90.

It can be used for Cashback or Miles, and lesser minimum redemption (also free conversion fees).

that thought has been on my mind, but if they have 0 FCY fees, i don’t think you can expect too much in the way of rewards. so you’d basically have another youtrip/revolut on your hands.