Why Uber’s new upfront fares are the opposite of transparency

I received an email from Uber on Wednesday informing me that they were moving to “upfront pricing”. What this means is that you’ll see how much your Uber ride will cost before you book it.

Now, Singapore will start enjoying upfront fares when they request their uberX rides! Simply enter your destination and get the actual trip fare before you request a ride, just like you already do with uberPOOL. This way, you’ll know your fare before you go; letting you decide what’s best for you and your budget.

Upfront fares are calculated using the expected time and distance of the trip and local traffic, as well as how many riders and nearby drivers are using Uber at that moment. When fares go up due to increased demand, instead of surge lightning bolts and pop-up screens, riders are given the actual fare before they request their ride.

There’s no complicated math and no surprises: just sit back and enjoy the ride!

No math! No surprises! 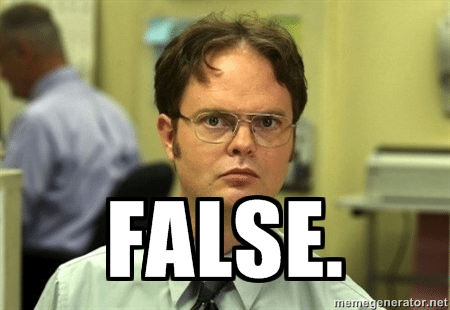 Uber may bill this as transparency and clarity. In reality it is anything but.

Uber now does not clearly disclose when there is a surge in place.

Consider this example, going from my home (approximate locations used, sorry fangirls) to my office in Collyer Quay. This route is normally $13-$17, according to Uber’s official price estimate.

Wonderful. I’ll take Uber to work today. And look, no scary surge symbols! Looks like a great day to take an Uber 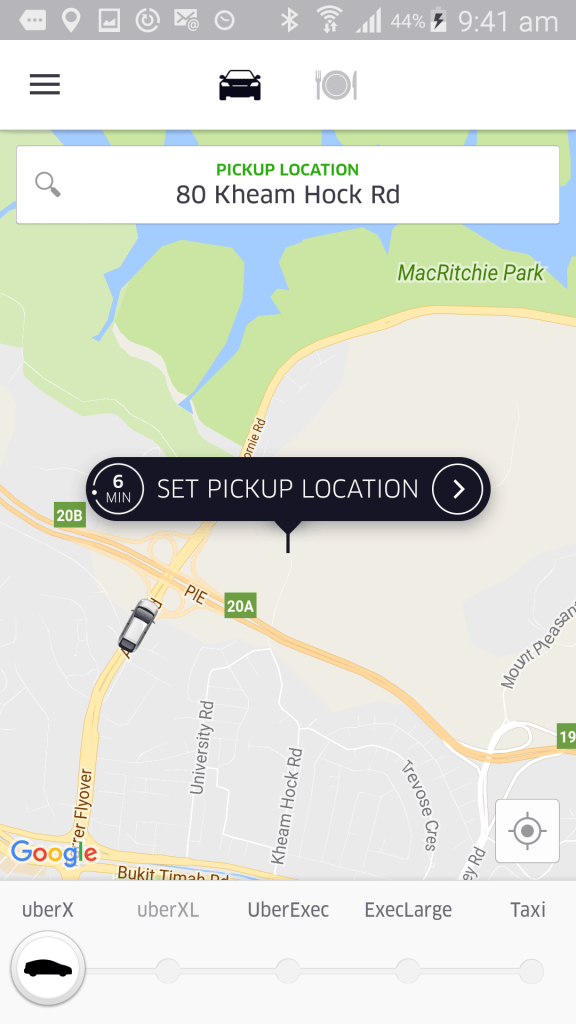 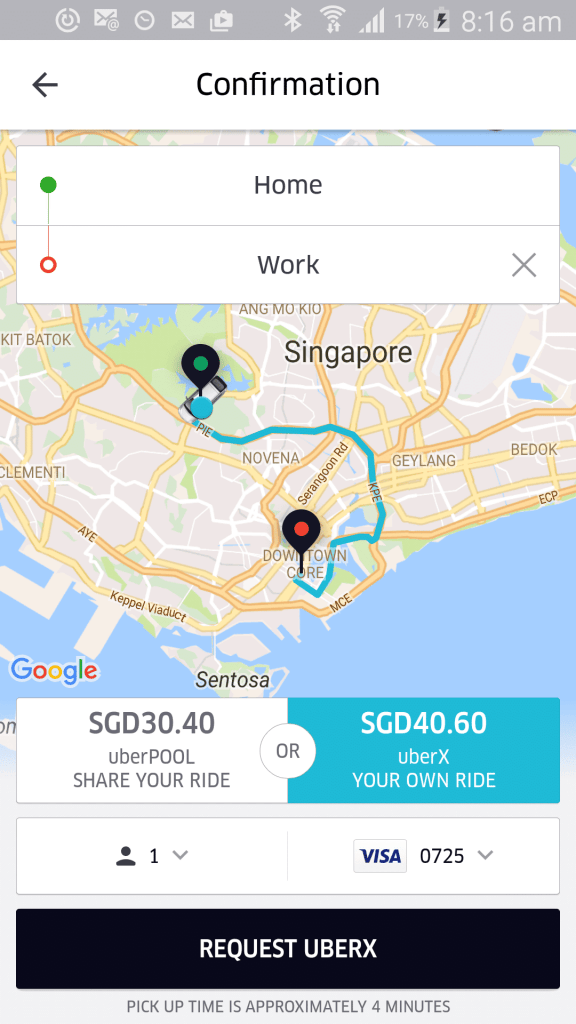 The trip today costs more than 3.0X the regular price!

Clearly there is a surge going on around my area, but you’d be hard pressed to tell that given the total lack of surge symbols.

Why is Uber doing this?

Consider the example of John. John wants to go from Point A to Point B. He gets a quote on Uber- $15.

What John doesn’t know is that the usual fare is $10, and he is paying a 1.5X surcharge. Now, if John knew this, he might be willing to wait a while for the surge to go lower.  But because John isn’t informed there’s a surge, he may assume this is as good as it gets. Uber therefore captures $5 of value it wouldn’t otherwise have.

Uber knows that the lightning surge symbols are a surefire way to scare off customers. So by removing them and not telling you what the “regular price” should be, it is removing that psychological barrier.

Uber makes sure that it is the price, and not the presence of a surge, that is the deciding factor in whether or not someone hails an Uber. Put it another way- if you think that Uber doesn’t fit into your budget, fair enough, Uber gets that. But if you think Uber could fit into your budget, you’re not comfortable about paying that additional 20, 30 or whatever % surge, Uber removes that barrier from your mind by not telling you about the surge. And that, to me, is what is so insidious about this move.

What makes me more riled up about this is Uber’s disingenuous way of passing this off as some sort of convenience to its riders.

A: This new way of showing prices accounts for surge, but provides the rider with more precise information up front. For example, instead of seeing that a fare will cost 1.5x, you will see that the trip will cost $10. This is aimed at getting riders like yourself more information upfront, so you can choose the product that best meets your needs and budget.

A: Dynamic pricing still very much exists, just as it does for POOL. The upfront fare takes into account all the factors that typically affect a fare, including demand at that moment in time in that part of the city, traffic, the length of the journey and tolls. However, since a rider is given a price upfront, the rider actually has more information about the cost. For example saying a trip will cost $10 provides more precise info to the rider than saying the trip fare is surging by 1.5x.

Except it doesn’t. Because before you used to do both- disclose the surge and provide the fare estimate in light of the surge.  This reminds me of how airlines try and pass off devaluations as “enhancements” to their customers.

So please take heed of this new sneaky move by Uber. I’ve got the fare charged for my usual routes more or less memorized so I should be able to tell when there is a surge, but when I’m dealing with places I don’t regularly frequent it’s a lot more guesswork for me.

Aaron Wong
Aaron founded The Milelion to help people travel better for less and impress chiobu. He was 50% successful.
Previous articleiPayMy is offering 250 free rental payments for September
Next articlePSA: Lifemiles on sale again with 130% bonus, should you buy?

Thailand Pass to be scrapped from 1 July

This move is more aimed to persuade customers using Grab to start using Uber. Grab provides upfront pricing and that was seen as an advantage for Grab. Many people I spoke to said they were not sure they wanted to take Uber in case the fare ended up much higher. Also you were at the mercy of drivers – whether they follow the map and whether they drive slowly etc. Fixed fare removed those variables.

sure, but can’t you have both? disclose the surge and give a fixed fare?

Well thought out article
Being the cheapskate person i am, if i knew it cost 50% more than the usual, i would rather walk. but now that its hidden, darn you Uber! The upfront pricing is much appreciated though

With this “upfront” pricing in effect, is it still possible to have a stop in between the origin and destination? In the past, Uber will just keep clocking as you move like a taxi, but what’s the position now?

The FAQs does suggest its still possible although it isn’t really clear to me how much of a “deviation” counts.

check FAQs- they will compute it as per a regular time and distance ride.

I used Uber today during the evening peak hours and remember the Uber app displaying a footnote that says something like “surge pricing is in effect due to high demand”. Don’t remember if there was a surge icon. This is on the iPhone app. However there are no info on how many x the surge was and no breakdown in the email receipt either.

interesting, because my colleague still sees the surge warnings on her iphone version of uber. my other friends don’t see surge anymore. so maybe they’re still implementing this, but clear from FAQ long term plan is to remove surge warnings altogether.

The actual fare for my Uber usually turns out to be lower than the estimated fare they quoted when I book the ride. Does anyone else experience the same?
Anyway, this upfront fare is sneaky. You reckon this has anything to do with the recent losses reported? http://www.bloomberg.com/news/articles/2016-08-25/uber-loses-at-least-1-2-billion-in-first-half-of-2016

completely agree, they should alert you when the price is not the lowest possible fare – Grab does inform you with the pink bar that fares are higher due to demand . I find this move by uber very dodgey and shows a lack of integrity.

these apps are great for the consumer. my cost has halves for the same trip. however, i dont think the model works…you reduce the fare, yet you pay the driver more. the app also takes a cut of the fare. the operational costs don’t change or are actually higher – because every driver is independant and cant use economies of scale (bulk buy operational cost items – cars/fuel/insurance). perhaps these taxi apps are like amazon – lose money for 10 years until consumers become accustomed to using the app over traditional methods and they start to normalise prices where they… Read more »

If you have an Apple Watch, you can still see the how big the surge is. It still shows 1.5x and so on when you try and book it from your watch.

Uber just announced 25% off their fares for grab car economy.

I think they need to match uberpool’s prices while offering a private car to stay competitive.

You mean GRAB just announced 25% off?

Hack, ordinary UberX on the same route before this changes was $11. So for me and her Uber is only for weekend rides and/or trips to/from Changi at night.

Knowing what is (or better was) appx price for ride before these changes and surge would help to know if you ripped off.

I took a ride in Kolkata. while no surge price was informed by Uber, it shows a 3.6 times surge price on completing the trip. The app does not show the option for raising the issue. I have sent a mail to support though support email is also not specifically mentioned.
I think if one has a choice, one should boycott Uber completely.

the problem is one doesn’t really have a choice. and yeah this is a dick move but what to do? I won’t switch to grab because of uber’s tie up with SPG