For the festive season, UOB is running a promotion to encourage people to spend overseas on their credit cards. Banks generally earn big margins every time you swipe your card overseas, so it’s not surprising to see them trying to sweeten the deal with giveaways like this.

From 23 November 2016 (yes, I’m late) to 31 January 2017, anyone who spends the foreign currency equivalent of S$300 on their UOB credit card in a single receipt is eligible for one prize token. Online spending does not qualify- only physical, in-person swiping counts. 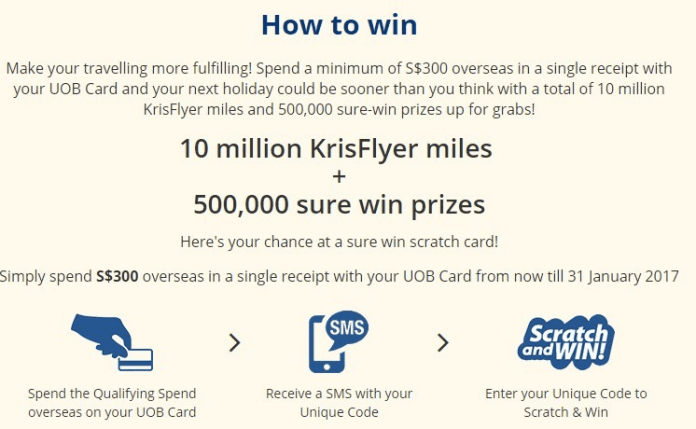 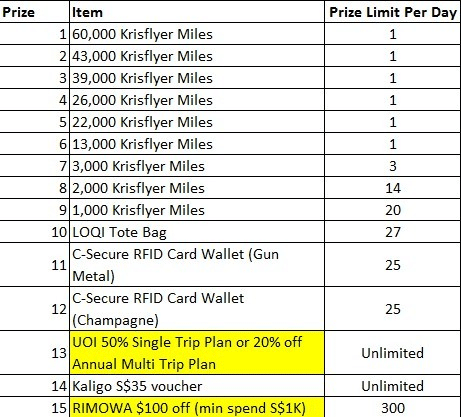 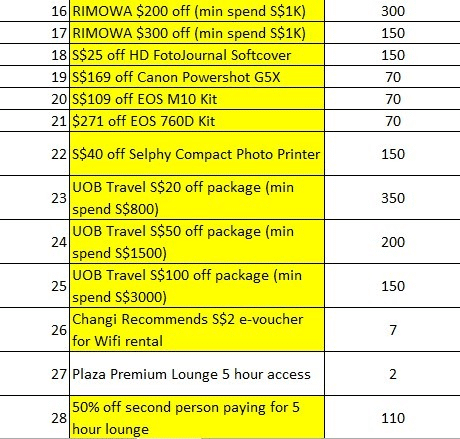 The top prizes sure sound sweet. But if you’ve got your eyes on the miles prizes and are about to splurge on your card overseas, let me explain why I’m a bit uncomfortable about this giveaway.

(1) Are there really 10 million Krisflyer miles up for grabs?

Although UOB slaps a big “10 million Krisflyer miles to be won” sticker on this, I have my doubts that the 10 million figure is anywhere near the actual figure that will be won. Why? Look at column 3.

Column 3 describes the theoretical maximum number of prizes of each category that can be won each day. This promotion runs from 23 Nov 16 to 31 Jan 17, both dates inclusive. That’s a total of 70 days.

(a) 10 million miles might be the expected number of miles to be given away (based on probability) – which I doubt because even if we assume that UOB can buy miles from SQ at 1 cent each, you’re talking about $100,000 worth of miles. That seems like a very expensive promotion if you factor in a 55% win rate (10/18.2)

(b) 10 million miles is the correct theoretical maximum (and that implies my 18.2 million figure is wrong because of some other factor I’m unaware of so we’ll ignore it from now on) because not all gifts will be won. I was trying to figure out why there was a discrepancy between what it says here

and what it says in the T&C

In any case, it’s safe to say that UOB has carefully set its probabilities behind the scene and the odds aren’t in your favour. Which brings me to my next point…

(2) The probabilities are difficult to pin down

Here’s how the T&C describe the prize card draw

The problem is that we don’t know what the probabilities assigned to each prize are.

That’s not correct. First, even if number of prizes is related to probability, there are an “unlimited” number of Kaligo $35 vouchers and UOI insurance discounts to be won (see next point) that mess up your calculations.

Second, it’s not correct to say that the maximum number of prizes in each category/ total number of prizes= probability of winning because they could be two completely unrelated numbers.

This gets simpler with an example. Let’s look at a 3 prize scenario with the number of prizes and probability of winning in the brackets)

That’s why the unlimited prizes are included in this game- because they can’t be exhausted, they soak up the bulk of the “wins” and ensure that the odds of winning the miles remains small. Presumably, in the UOB system, the unlimited prizes have been assigned a much higher probability of being won.

You’ll notice I highlighted some prizes in yellow above. These are the ones I like to call “give with one hand” prizes. Some of these are obvious marketing tie-ups, eg the opportunity to buy a Canon camera or Rimowa luggage at a discount. Plaza Premium’s contribution to this giveaway is just sad- they’re awarding a maximum of 2 free lounge passes a day, but will gladly give away 110 prizes of 50% off lounge access for the second person. Yup, the second person. The first person needs to buy lounge access at full price.

The UOB Travel vouchers? T&C state no combining of vouchers in a single booking. Yup, it’s just to sucker you into paying UOB Travel’s inflated prices. And don’t get me started on the unlimited number of 50% off single trip plan/20% off annual multi trip plan “prizes” offered by UOB Insurance. That has to be the ultimate booby prize.

The way I see it, there are only 122 prizes per day that come with no strings attached (in the form of minimum spending ,or require you to buy something to enjoy the discount)- the 43 miles prizes, the 27 tote bags, 50 wallets and the 2 lounge passes.

I could of course just be misreading all of this, and I invite any reader with a better understanding of probability (and online giveaways) to educate me about this. Have a read of the full T&C here.

TL;DR. If you’re planning to spend overseas anyway be sure you get your token. But don’t spend deliberately just to take part because I suspect we’re going to see a lot of lucky UOB Insurance discount voucher winners…

Here’s a challenge to any mathematically inclined reader- can you figure out the maths behind this? Is my analysis correct? Or am I just embarrassing myself here?

In summary- this is the question you need to ask yourself: Aaron Wong
Aaron founded The Milelion to help people travel better for less and impress chiobu. He was 50% successful.
Previous article
The Milelion Directory has been updated for December
Next article
The Case for Hilton HHonors Gold

Everything’s twisted about UOB. They are the inventors of BioDynamic Reward points. “You’re points will be posted only if the pie you ate was made from oranges grown on Himalayas. To be eligible for the points , these oranges must have been nurtured by sheep horn manure. This is applicable only for first 50 sheep horns found in qualifying period. Please note, qualifying period refers to 23 days before earth approaches Apogee and ends 3.5 days after it. If the above conditions are not met, we will steal 7500 points towards annual fee payment without your permission.” – from a… Read more »

I felt the same way when I first saw the promo …. totally misleading and quite a rip off … imagine you “won” prize 13: a whopping 50% off UOI insurance. Basically what you “won” is the right to buy UOI insurance from UOB which is a very sneaky way to award prizes. All I can say is this is so typically UOB!

I don’t bank with UOB because I think their marketing is trying to be too smart but when you realise, you feel cheated. It’s misleading, and borderline criminal. Some other examples i take exception with: PRVI being advertised at 1.4miles/$1. It isn’t, it’s 7 miles for every $5. Spend $4.99 and I don’t need any fingers to count how many miles you get. SMART$ transactions make you ineligible to earn your credit card rewards. That’s woeful given some of the low SMART$ rebates on offer. And isn’t SMART$ retailer funded anyway? That’s UOB just cheaping out. The irony is that… Read more »

For other UOB XMas promotion :

G Shock from UOB already fully redeemed and it still one month from the ending of spending period. Shocked, either stock too little or UOB clients too kiasu LOL. So sad, i think the promo still long until 31 Dec.

What a way to disappoint their customers eh. I never expect UOB to have enough to a few weeks in to the program.

UOB marketing is disgraceful. We cant say they’re lying – but they are not clearly written in the basic and easily understandable way. I REALLY wished DBS has the same or better air mile reward scheme. I never want to bank with UOB and I only do due the Mileloin telling me to – kidding. I’m only using UOB credit cards due to the better air mile reward scheme. I wish i never had to bank or do business with uob.

I just qualified and won the following:
$20 off a UOB Travel package! With $800 min spend.
$300 off RIMOWA luggage

haha, don’t spend it all at once.