I wrote previously about being able to pay ERP charges with your credit card. This service, called EZ-Pay, was previously only available to those who had Citibank cards. There were no fees involved, and you could earn rewards points for payments made.

It was announced this week that EZ-Pay would be extended to DBS/POSB cards as well. 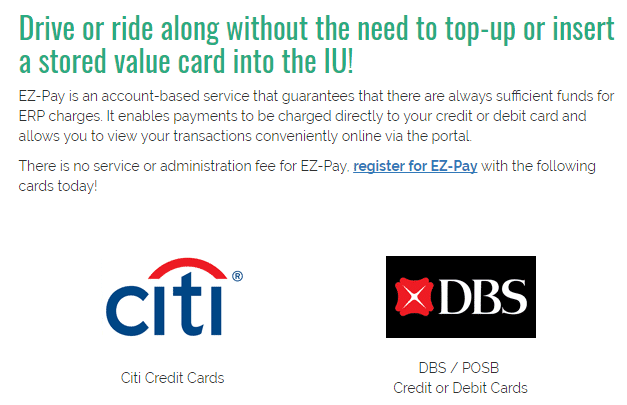 To recap- with EZ-Pay, your ERP charges are billed directly to your card if you have insufficient value in your cashcard or go through the gantry without a card. I don’t have a car, but if I did I’d certainly see this as a way of earning a few bonus miles, especially given the lack of top up fees. You’re not going to earn a lot of miles through ERP, obviously, as I would imagine that the amount you pay on parking would far exceed the amount spent on ERP.

And here’s where phase 2 of the project becomes interesting, because eventually the plan is that EZ-Pay will extend to parking charges as well. That’s right, you can enter and exit a carpark without needing a cashcard. 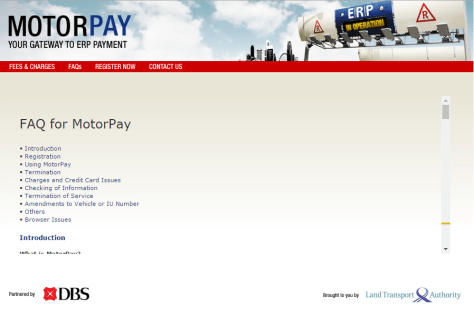 DBS offers  MotorPay in conjunction with the LTA and charges $1.07 a month per vehicle. Every time you pass through a gantry, the charge is billed to your DBS credit card. 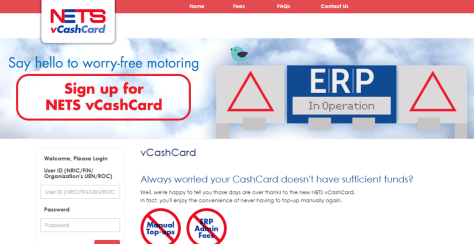 VCashCard  allows you to use Mastercard and Visa cards from DBS/POSB/OCBC/UOB and SCB to top up a virtual cash card. When your card balance drops below $10, it is automatically topped up. You can only top up in intervals of $50, and a $0.50 transaction fee is charged per top ups except for UOB cards. 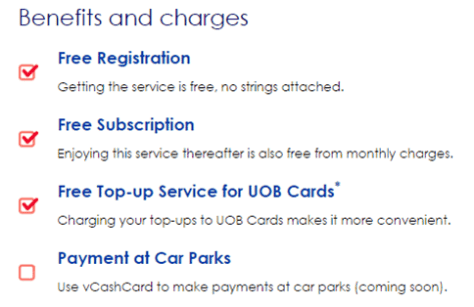 The advantage of EZ-Pay is the lack of a transaction fee. Every little bit, right?

Aaron Wong
Aaron founded The Milelion to help people travel better for less and impress chiobu. He was 50% successful.
Previous article
The ANZ Travel Visa Signature is dying a slow and undignified death
Next article
The Milelion Directory has been updated for March

I don’t have a car so I am a bit fuzzy. But I thought you could just put an ezlink into the IU and use auto top up on your HSBC Advance to get 10x up to $200 per month. Also with ERP (and this new ABT that LTA is doing for trains and buses), it depends on how they charge. If EZPay pushes through every charge individually, you might see a lot of <$5 charges which thanks to this absurd earning rate where it is rounded down to the nearest $5 (I have been in SG for 2+ years… Read more »

that is an excellent point, actually. i hadn’t thought about how the charges come through. will try and dig and see what i can find.

re: hsbc advance, that would work too.

I just signed up for the Citibank SMRT card, which is around 1.7% rebate and ATU!

For info, I use Citibank cc to pay erp. Lta will “hold” $50 against my card by charging pending transaction weekly, but I get charged daily for actual usage. As my erp is $1 daily, I earn 1.3 miles per day, lol. Anyway it’s more of a convenience than actual miles earning means as the amount is minimal

Therefore, its free top ups and i get 4 miles per dollar for my ERP charges. 🙂

Not if they come through individually, and the ERP is less than $5. Any transaction <$5 gets rounded down to nil and you get no points, thanks to the stupid $5 rounding system used by dbs and uob

Eh… Every auto top up done by NETS vcashcard is $50. What are you talking about?

Hmm, cant use for parking right?

hello simpledom! I went to look up UOB PPV’s website and it states – * Online retail transactions are transactions for purchases of goods or services via the internet using the Card. Online merchants include merchants that fall within the categories of bookstores, cinemas, entertainment, electronics, fast food, music and retail shopping, but excludes all merchants that fall within the categories of airline, travel, transport,top-ups for any pre-paid card, government, utilities, telecommunications, brokerage/securities, insurance, education/tuition, online money transfers and online gambling websites and such other categories of online merchants as UOB may exclude from time to time. It lists Travel,… Read more »

Anyone else earning more on their vcashcard charged to PPV ?

Another point – there are some places (eg IKEA Alexandra, Paragon etc) which give you free paper parking tickets. You are usually required to remove your IU card, and feed the paper ticket to open the gates to exit.

How are you going to do that with the cardless EZ Pay? 😛