Good breakfast is the redeeming feature.

Tiny Rooms are not enjoyable 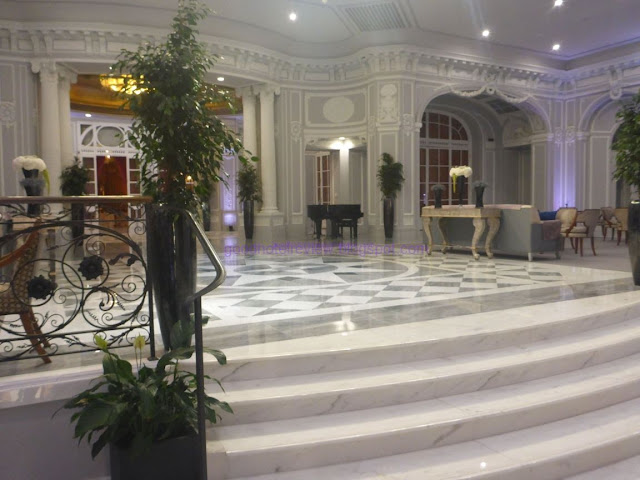 After a brief stay at Bucharest, I arrived in Rome to fulfil one of my childhood dreams.

Other than the Acropolis in Athens, the Colosseum was another of the images in the encyclopaedia I read as a child.

But the journey there wasn’t smooth.

A few weeks before the trip, I received an email that my flight from Bucharest to Rome was cancelled and I had been rescheduled on the flight on the next day!

Thankfully my booking was made with points at the Sheraton Rome and I cancelled that booking closer to departure.

So there was no harm done, except a shorter time in Rome and a longer stay in Bucharest.

Arriving safely at the Rome airport, I took the airport train ( I still remember someone left a funny comment on how I was taking the metro to luxury hotels.) to the central station and walked to the hotel which was a short but significant distance away.

As usual, the staff at the entrance gave me weird looks as I didn’t ‘arrive in style’ but were nonetheless helpful when I entered. Unlike a certain Waldorf.

The hotel was still undergoing renovations at that time and it affected the front desk, so the experience of checking in wasn’t too great. 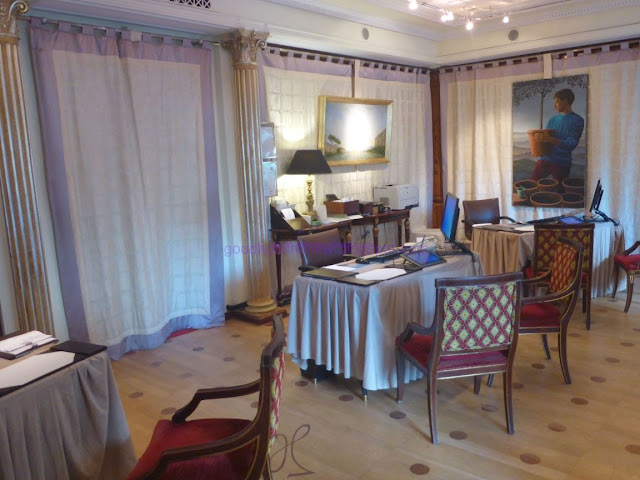 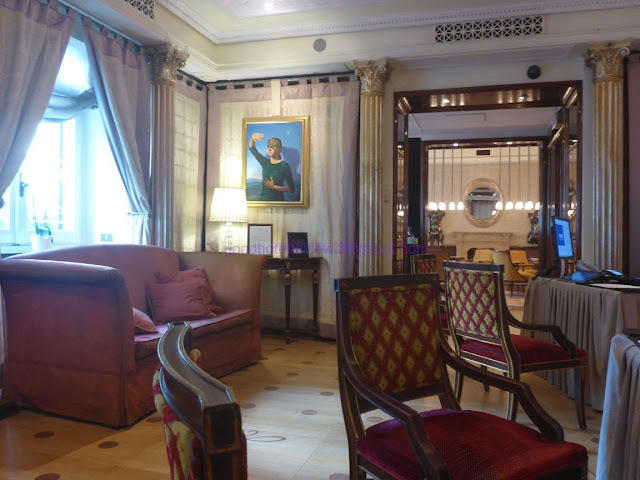 Checking in was uneventfully, and I was upgraded to a larger room. Having read up on the hotel, suite upgrades are pretty rare.

The upgraded room was still really quite small to say the least, and I shudder to think how the basic room is like! Especially at a rate of 300 Euro per night. 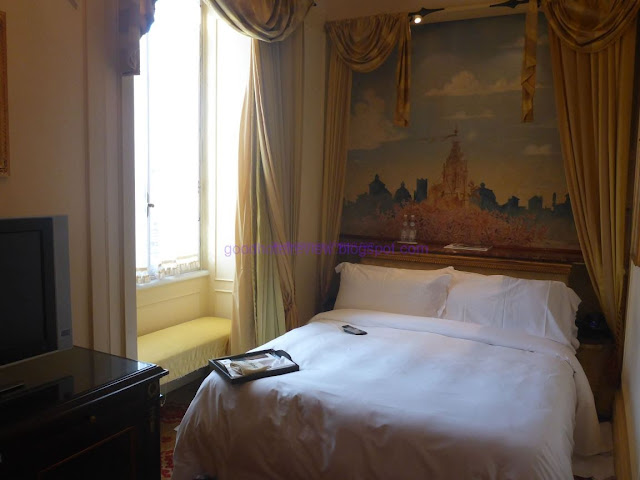 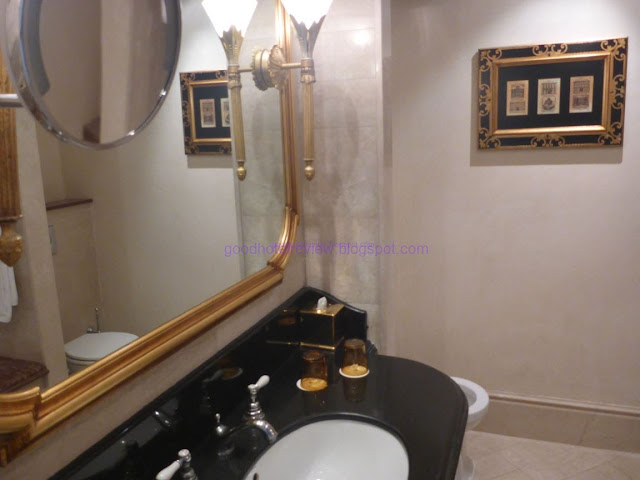 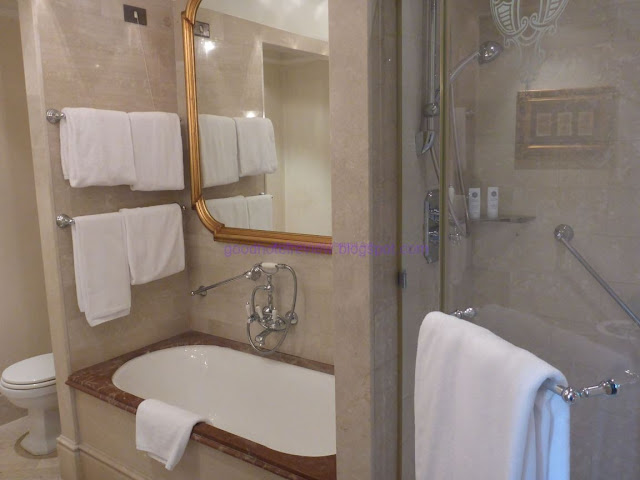 After settling in the room, I took a walk around the hotel noting some interesting decorations as well as an ancient lift. 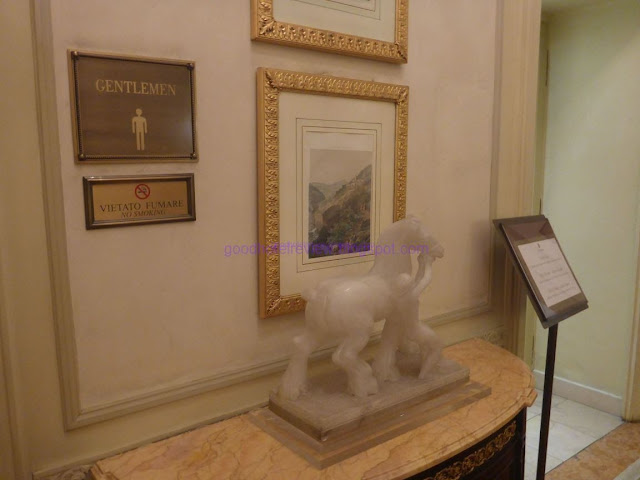 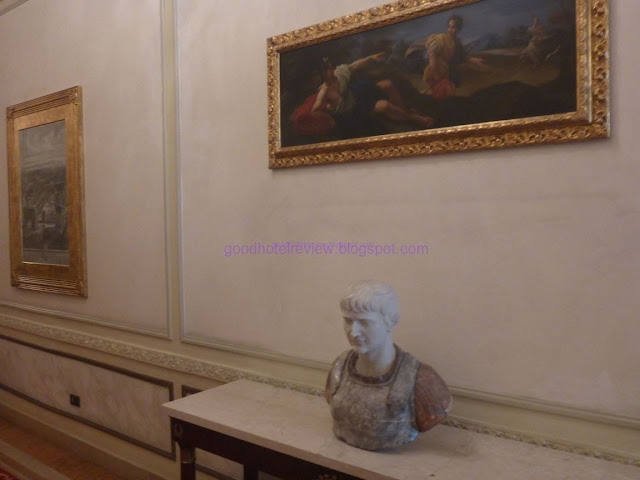 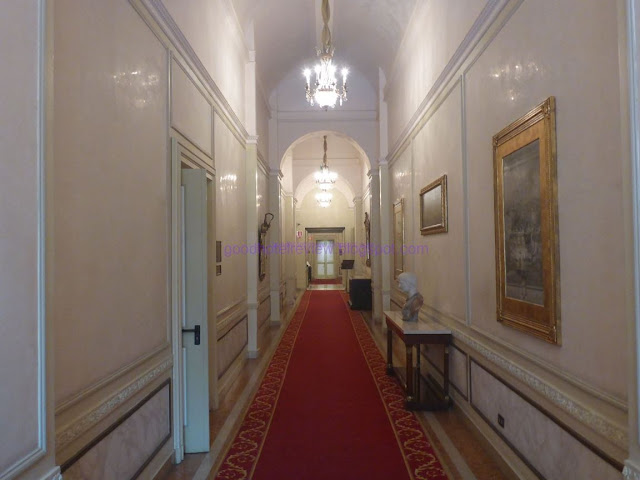 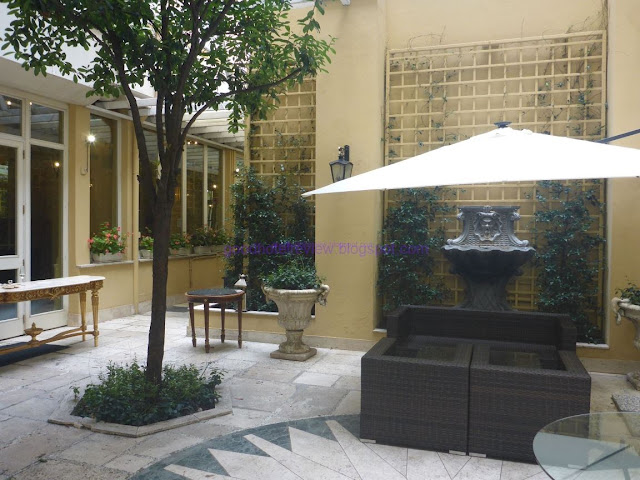 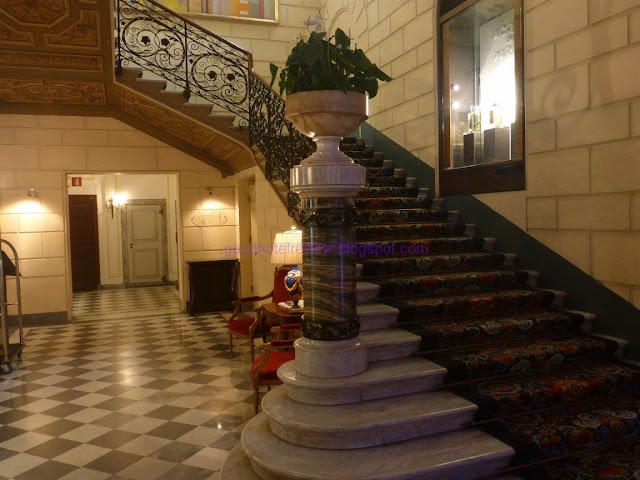 Even the toilet has sculptures. OMG. 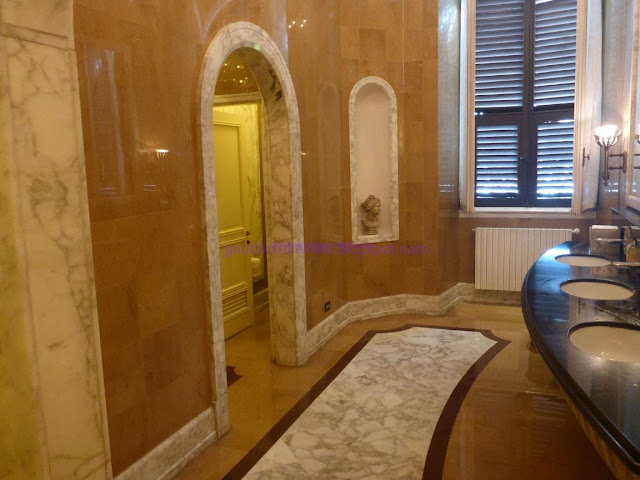 Breakfast was served at the restaurant off the lobby and looked really grand and pompous.

The chandeliers, wall and ceiling art made one feel so narcissistic. -laugh- 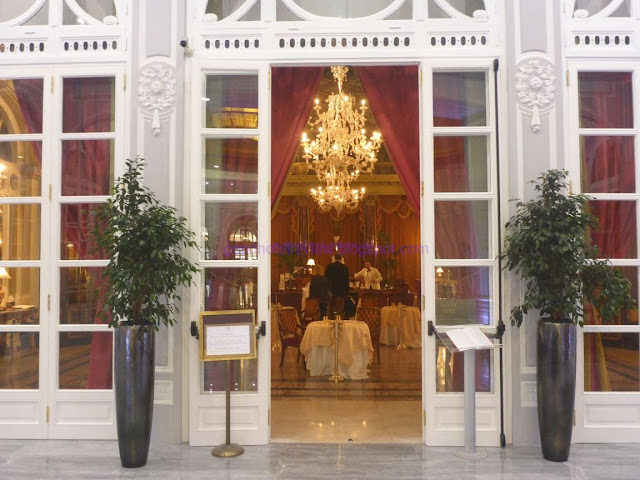 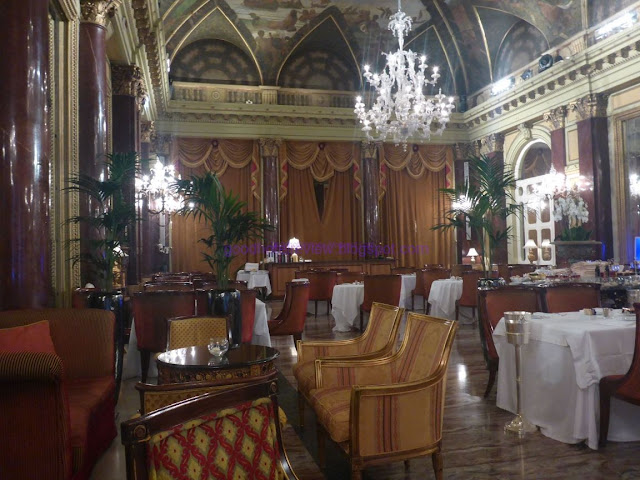 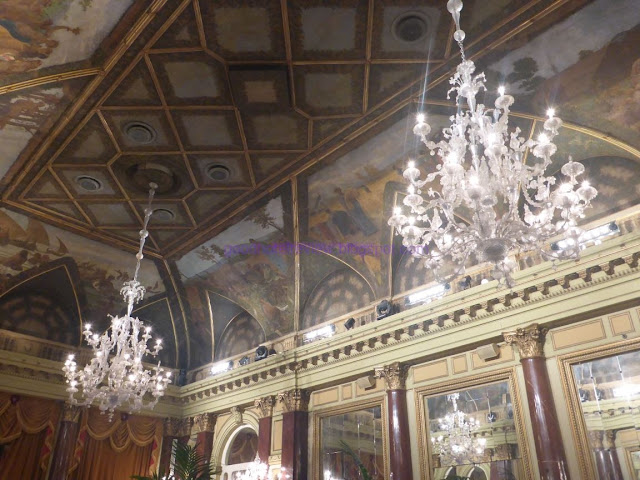 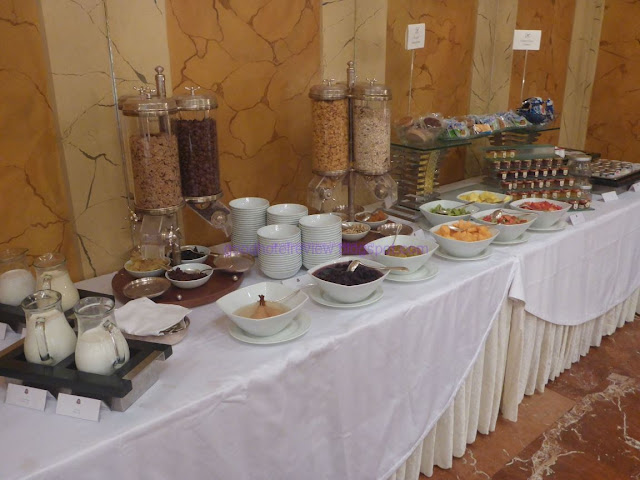 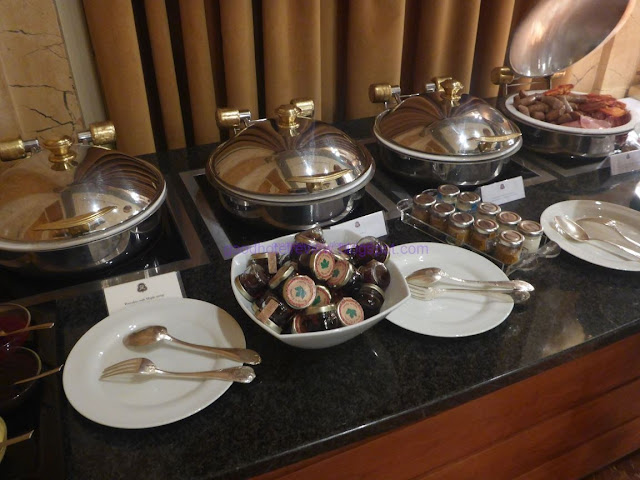 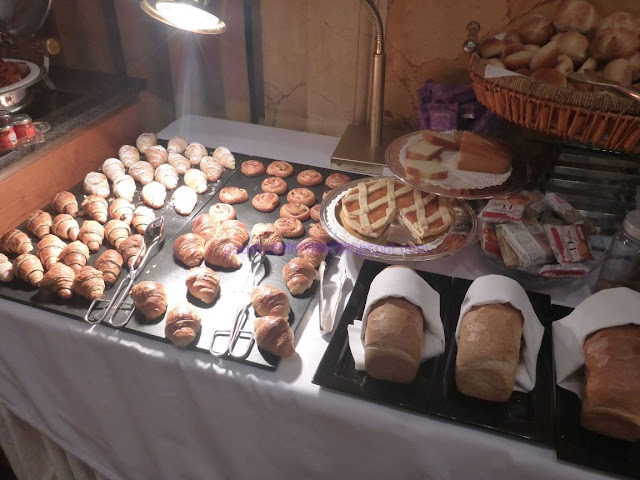 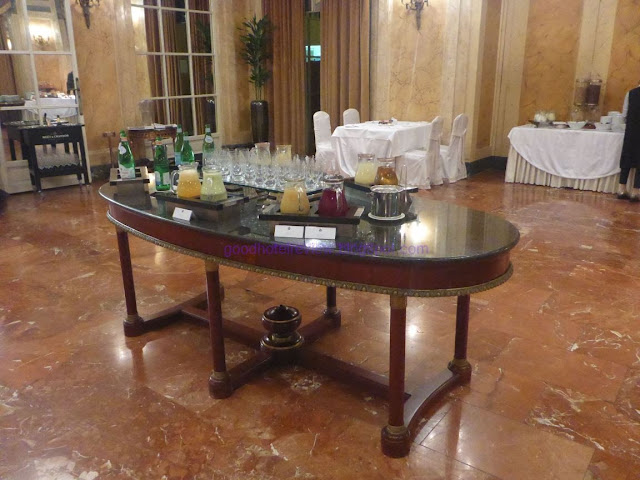 The food display was really good and I guess it should rightfully be for that nightly rate, and there was a lot of space to move around during breakfast.

No jostling with other guests for food and space.

Checking out was easy and I felt really claustrophobic inside the room.

Otherwise, the location of the hotel was good, with easy walks to good restaurants and some central Roman attractions, including the Trevi Fountain

“This place looks so ‘atas’, Grumpybear!” “What is ‘atas’, Polarbear?” “That means high class, Grumpybear, in Singlish.” “Why use Singlish?” “Language is not only for communication, but also to forge a common identity. However, one should also be able to speak standard English outside Singapore.” #stregisrome #Rome #Italy #cute #roundtheworld #singapore #igsg #sgig #travel #travelgram #instatravel #traveling #polarbear #grumpybear #letsgoeverywhere #wanderlust #lifeisgood #beautifulhotels #beautifuldestinations #bestvacations #luxurylife #luxurytravel #luxuryhotels #nofilter #softtoy @stregisrome @destinasianmagazine @n_o_w_n
A post shared by Polarbear And Grumpybear (@polargrumpybears) on Jan 6, 2017 at 7:57pm PST

Fred Ee
Dr Frederick Ee is a medical doctor, author, blogger and traveler. He discovered his passion for travel on his first long-haul trip to New York City in 2012. His quest for premium travel experiences started on that very same flight as he endured a smelly foot beside him from the passenger behind him for the 24 hours of flight from Singapore to New York. He blogs at goodhotelreview.blogspot.com, focusing on hotel experiences. His most memorable moment of travel was to participate in the resuscitation of a collapsed patient during a long flight to Paris. Feel free to add him on Facebook with a message and his Instagram at @drfrederickee. He would like to thank MileLion for having him as a guest writer and hope readers would enjoy his writings and musings.
Previous articleReview: Oman Air Business Class E175 Muscat to Dubai
Next articleReview: The Grosvenor House Dubai

I can’t believe that is an upgraded room. Makes you wonder what the “normal” rooms are like. The bed looks very cramped!