Not enough miles for a pair of business award tickets? Consider getting a companion ticket award instead.

Earlier this year, with the KrisFlyer chart devaluation, some of us began wondering whether to switch to Asia Miles, while others embarked on even more hardcore research (involving spreadsheets!), comparing the value of KrisFlyer and Asia Miles awards. Throughout all this, something that has been left largely unexplored is Cathay Pacific’s Companion Ticket Award.

FrequentMiler describes the Companion Ticket Award quite comprehensively, but in essence, this award type allows you to redeem one award ticket for about 35% fewer miles than a standard award, if you’ve purchased a revenue business or first class ticket.

For many mile hackers, the thought of buying a premium revenue ticket doesn’t even cross the mind. In fact, though it had previously been highlighted in a comment, the need to purchase a revenue ticket made the companion award seem like an unappealing option. Earlier this year, though, I found myself a little short on miles and wondered if redeeming a CX companion ticket could possibly be the solution to my problem.

Spoiler alert: for my itinerary (SIN-HKG-HND), I certainly thought it was worthwhile.

The figures below do not take into account the fact that flying on a revenue ticket allows you to earn miles and club points, which could be useful if you’re trying to build up or maintain Marco Polo Club status. Depending on how much you value those, it might be worth considering this option even if the effective price is higher than sticking with standard award redemptions.

It’s theoretically possible to do the redemption online using the CX website by selecting the ‘Companion Award’ option on the ‘Redeem flights’ page. 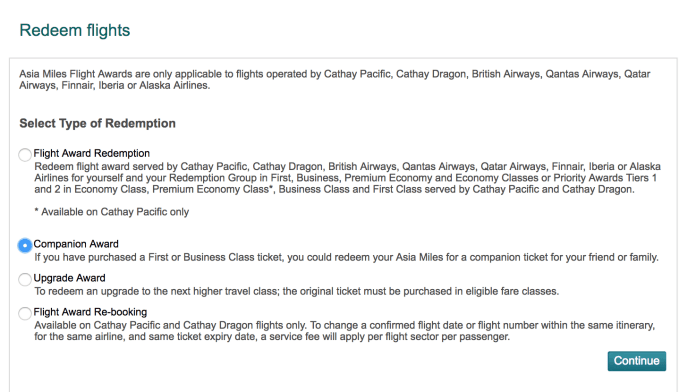 Choosing this option will lead you to a screen where you get to choose eligible flights (revenue business/first tickets) to tag your companion award to. Without an existing revenue booking, though, you’re unable to check the availability of companion awards online (though checking standard award availability should be a good proxy).

What I ended up doing was to…

Or, at least, that’s what I tried to do. For some reason I was unable to complete step #5 on my own and ended up calling Asia Miles to complete the redemption (panicking slightly along the way). If this happens to you as well, remember not to expect the fees to code as online spend if you provide card details via phone!

In order to figure out the worth of companion awards, it becomes necessary to assign some sort of value to the miles spent on the various redemption types. The precise value of a mile is a very subjective topic and in truth likely differs from person to person; that said I have decided to assign it the commonly-floated value of 2¢, which is also around the upper limit of what some would suggest you pay when buying miles through credit cards.

The following data was extracted from the CX website and the Asia Miles award charts:

Then, using the 2¢ valuation of the mile, I worked out the effective price of each ticket, expressed in the universal language of money. I’ll show my working for the first example, followed by the summarised findings for other destinations.

For this post, I’ve opted to examine the costs of flying on business class to five destinations: CX’s main hub Hong Kong, as well as some of the other popular destinations I’d first examined in my previous analysis; namely Bangkok, Tokyo, London and New York. It’s not an exhaustive list, but I find that these cities offer a good spread of plausible destinations that Singaporeans might fly to on CX.

For award redemptions, the effective price easily calculated by converting miles to cash.

For the companion awards, however, you’d probably want to factor in the price of the revenue ticket, unless you’re getting reimbursed for that, in which case the above value can be used (and is clearly the best option). For a more realistic representation of the cost to a private individual, the price of the revenue ticket needs to be averaged in.

The final summarised price listing is shown below.

Cheapest option: A pair of standard award redemptions is just slightly cheaper than getting a promo revenue ticket with a companion award. If you value the extra miles or (Marco Polo) club points, it might be worthwhile paying a little more for the latter option.

Cheapest option: Getting the companion award with promo revenue will save you a good chunk of change as compared to two standard awards, though that advantage is lost if the non-promo revenue ticket is purchased.

Cheapest option: As we move into long-haul territory, we start to see standard award redemptions clearly taking the lead – due to the high cost of revenue tickets (even when discounted), redeeming two award tickets has a lower effective price.

Cheapest option: As we move further into long-haul territory, the gap between revenue and award effective prices starts to converge a little. Still, standard award redemptions clearly have a lower effective price.

I’d briefly considered whether companion tickets would be a viable option for first class tickets, but due to the astronomical cost of revenue F tickets, it soon became clear that it didn’t make much sense as a cost minimisation tactic, as illustrated in the quick example below.

You would note that you could make four standard award redemptions (assuming you can find availability, of course) on the price of a revenue F ticket – there’s no way the slight discount for the companion award could offset that!

The companion award ticket is clearly a great choice if your revenue ticket is reimbursed, since you get to redeem a second ticket at a discounted rate as compared to the standard award ticket. Even if that’s not the case, the effective price of purchasing a revenue ticket and redeeming a companion award could actually be lower than redeeming two standard award tickets, especially on short-haul flights purchased on promotional fares.

It’s something worth considering especially if you’re rationing your miles or aiming to build up club points for Marco Polo status. Conversely, if you’re currently drowning in miles (in which case I’ll cheerfully accept donations), it’s probably not an option you’d want to go with.

Louis Tan
Louis believes he caught the premium travel bug after attaining KrisFlyer Elite Gold and occasionally being upgraded while shuttling between the UK, Singapore and Japan (in economy class). These travels have led to a wonderful marriage, as well as a burning desire to avoid flying long-haul economy. He previously travelled with a gryphon plush toy, Griffles, which often stood in for him in vacation photos. Griffles is mostly busy with entertaining a toddler these days, but still manages to continues amusing (and confusing) air stewardesses, hotel staff (and just about everybody else) all around the world.
Previous article
How to earn 4 mpd at more places with OCBC Titanium Rewards and mobile payments
Next article
Singapore Airlines adds new fare types, seat selection fees

I believe Aaron’s drafting an analysis on that even as we speak / type. 😉

So if you have to call the airline and pass your credit card details to pay for any service (e.g. award ticket taxes) it won’t count for the 4mpd on DBS Woman’s? Or is this only for Cathay Pacific?

I don’t have personal experience but Aaron had shared about his experience with CX phone charge in a previous post. That said, I can’t imagine why that principle won’t apply to other airlines (even some supposedly online spend are processed offline – doubt it’s common for the inverse to be true).

Okay. At least for Qatar Airways it appears with the same text in my credit card statement, whether I make a purchase online or pay for taxes on an award booking via the phone. This cycle I will clarify with DBS on the points accrued for these transactions.