OCBC Visa cards can now be used with Apple Pay as soon as they're approved by the bank.

I got an interesting press release today from OCBC about so-called “instant provisioning” of newly-approved credit or debit cards. What “instant provisioning” means is that you don’t need to wait for the physical plastic card to arrive in your mail anymore. As soon as your card application is approved, you can add it to your Apple Pay instantly via the OCBC Mobile Banking app.

This service is currently only available for Visa cards, which means the much sought-after OCBC Titanium Rewards card won’t be eligible, but I can only assume that it’s in the pipeline. Also, it’s only available on Apple Pay, which unfortunately means this Blackberry Keyone (Android, fyi) user will have to wait his turn. 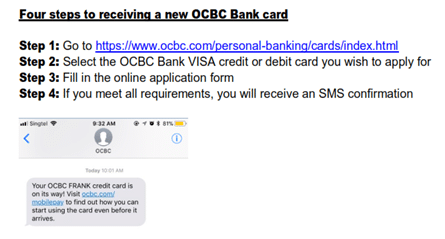 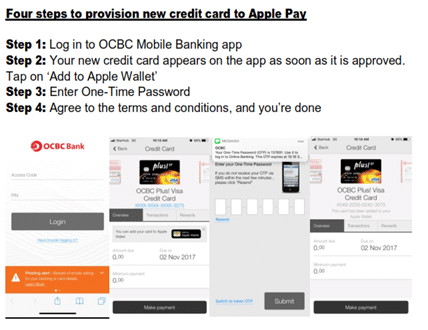 It’s definitely an exciting development, insofar as it cuts down the waiting time to start using your new card. And besides, it’s in the bank’s interest too that you get your new cards quickly so you can start spending. Faster delivery of physical cards has always been a goal for banks (and indeed, is something UOB has been trying to do with its guaranteed same day card delivery service) but a cheaper, more scalable way would be through solutions like mobile wallets.

Probably off topic, but what excites me about mobile wallets is the possibility of creating an add-in (plug in? overlay? whatchamacallit?) for Apple/Android/Samsung pay that automatically selects the right card for a particular merchant, depending on the MCC. I can see it now- you tap your phone at the merchant, and if it’s a restaurant, the mobile wallet select one card, if it’s a department store, it selects another, if it’s a taxi, it selects another… I have no idea whether this is actually possible, but it’s a pretty nifty idea if it were.

Hopefully we’ll see this expanded to other cards and other banks soon as well.

Aaron Wong
Aaron founded The Milelion to help people travel better for less and impress chiobu. He was 50% successful.
Previous articleCan Singapore Airlines fix the issues with its new A380 Suites?
Next articleEverything you need to know about the combined Marriott-Starwood loyalty program

interesting. this is the first i’ve heard of it. the only difference I can spot is that there seem to be some instances where UOB approval isn’t instant? (https://www.uob.com.sg/delightdigitalfaq/instant-digital-card-faqs-final.pdf)–> If the application* for an Instant Digital UOB Credit Card is submitted between 8am to 9pm, the application status will be sent to you by [email protected]