Can Singapore Airlines fix the issues with its new A380 Suites?

Singapore Airline's new A380 Suites are held back by some design issues that prevent them from being truly great- can they be fixed?

Singapore Airline’s new A380 Suites were unveiled in November last year to a heck of a lot of fanfare. The reimagining of the Suites seat as a hotel room in the sky was no doubt impressive, and although I wasn’t completely won over by the design and use of space, I decided to save further comment until I’d actually flown the product.

That review happened last month, and it was during my flight that I realised there were some pretty significant design flaws in the hard product which prevented the new Suites from being a truly outstanding experience. It was a shame too, because a lot of these issues appeared to be things that could have been easily caught during the testing process.

The new Suites have been flying for barely five months now and naturally there aren’t a lot of reviews out there. However, what few there are seem to confirm I’m not alone in noticing the issues. In today’s Straits Times, senior aviation correspondent Karamjit Kaur writes about customer complaints regarding the new A380 suites (the article is behind a paywall so I’m going to summarize the main points). 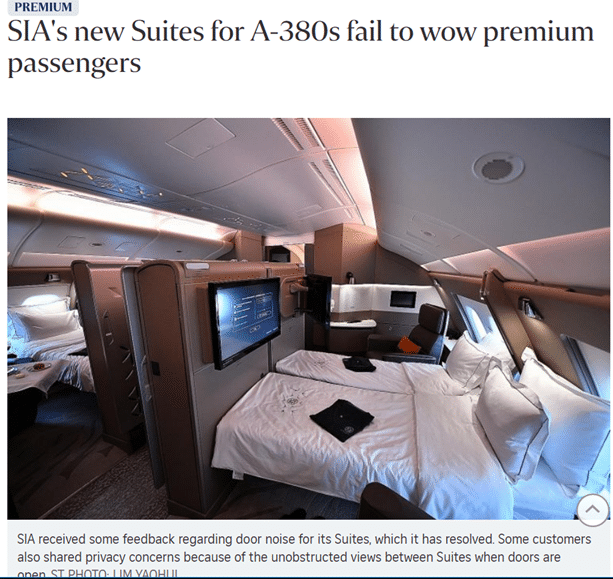 I’m glad the design issues are being brought to light, but the problem is, the article barely scratches the surface, quoting a grand total of one customer and highlighting only two issues:

Needless to say, there are problems beyond that. To recap:

(On a separate note, it seems that a couple of flyers have encountered disturbing QC issues on their flights in Suites and business on new A380. I’ll let the photos speak for themselves)

Barely 2.5 months old and @SingaporeAir A380 9V-SKV is showing wear and tear. Problem of product, supplier or installation? pic.twitter.com/S2V8LbyS0d

At the PPS Event I attended a few weeks ago, I met someone from the SQ side who worked closely with the external design team to create the new A380 cabin products. We had a great chat about all things SQ, and I had the chance to pass along my feedback on the new Suites. Here’s the relevant points he mentioned:

I’m glad that SQ is aware of the issues, but the question I have is this: to what extent can these issues actually be addressed? It’s clear that some of these issues can be somewhat alleviated by changing crew SOPs (eg keeping the temperature in the cabin lower, actively instructing crew to congregate further away from the last row of Suites), but others may require fundamental product redesigns. I’m no expert on seat certification, but my understanding is that even a small tweak can mean needing to re-certify the entire product.

For example, I don’t see how the awkward design of staring across the aisle at the other person while dining can be addressed, short of redepositing the door (which would surely trigger recertification requirements, right?). This is a particularly annoying problem, because it seems like something that could easily have been avoided by simply staggering the doors on the suites such that one aisle does not directly mirror the other (of course, I fully concede there are a whole host of design considerations that I’m not privy to as an outsider, and I could simply be talking out of my hindquarters about how “easy” it is). Similarly, the issues with light and noise pollution can be minimized, but not completely solved short of a redesign.

All in all, it’s a shame because if you asked me which version of Suites I’d prefer to fly, I’d tell you “old Suite for comfort, new Suite for novelty”. On a daytime flight, give me the new Suite any day. The additional space, the amazing bathrooms and the novelty of having your own hotel room in the sky is too good to pass up. But on a nighttime flight when I need to sleep? The old Suite bed is way superior, and easily one of the best sleeping experiences I’ve ever had in a plane.

I’d love to be proven wrong, of course, and it will be very interesting to watch what SQ does over the next 6-12 months as more feedback (and more new A380s) come in. The good news, if you want to call it that, is these flaws are coming to light at a relatively early stage, with only 3 new aircraft in circulation. If SQ wants to do a redesign, it would be (relatively) lower cost to do it now versus a couple of years down the road.

Let’s wait and see what happens, but if I were you just might hold off making a big once-in-a-lifetime redemption on this product for a while.

At the very least the FRA/JFK route hasn’t gotten this “upgrade”… yet. Will they fix the issues by then? Only time will tell.

I doubt if the cost will be much lower to change at this stage – all the components have been designed and templates, etc have been made. Materials ordered. Most important is how SIA approves and tests new configurations and mock ups. In a studio? An SIA office? Did they replicate operating situations that they would encounter 24/7? After all even the galley is laid out a certain way, how do you move equipment and activities? Sounds like the panel in charge were too much into perks of the job to pay sufficient attention to the basics. It’s always the… Read more »

Eye shades for light pollution, earplugs for noise pollution, handheld fans for the heat problem and a face veil for the awkward dining moments.

I’m surprised that none of these issues came through during product testing and can surmise that the department in-charge is either tone deaf or no tests were done.

Despite some issues with the Suites, the spokesman said: “Overall feedback about the new A-380 Suites product, as well as about the other cabin products on the aircraft, has been extremely positive. We are very pleased with what our customers have been telling us about it.” SIA would not say if they are considering a redesign of the Suites. The spokesman was only prepared to say that the airline is in “constant contact with our aircraft suppliers to ensure that all our products meet our high standards”. Businessman Gino Bertuccio, 55, who was on the inaugural Singapore-Sydney flight on Dec… Read more »

he even wrote a trip report!
https://airwaysmag.com/uncategorized/exclusive-etihads-the-residence-inaugural-trip-report/

He’s the CEO of this company. https://ligimport.com/

Aaron, now you know where to buy the creams and emollients for the individuals in your den of iniquity.

It’s beyond doubt that the party who designed this seat had the intention of 2 passengers facing each other during meal time. To bury it down as an oversight is like taking us a 3 years old children or your view is crooked. To what purpose or intention? We don’t know and they won’t tell you either since it turns out to be a mishap. One of Emirates’s advertisement showed a trendy lady and gentlemen seated at the same row in the business class cabin got hitched just by looking each other at an angle. Wouldn’t they be hitched faster… Read more »

Probably to fix the staring at the opposite person problem, a simple fix could be… curtains? just draw the curtains during meal time…

I flew SIN-HKG and was blown away by the new suites. But only had 2 other F flights so perhaps too excited.