The list of new destinations that will be getting the Singapore Airlines Boeing 787-10 has stagnated for quite some time after the initial announcements that they were deployed to Perth and Osaka. Presently, some flights to Tokyo (and soon to be Manila apparently) are being operated by the Boeing 787-10 but this wasn’t formally announced. As per The Shutterwhale, Bali is now confirmed to receive the Boeing 787-10 Dreamliner aircraft from 2 July 2018 onward.

Here’s the flight schedule for flights to Bali: SQ942/SQ943 will be the operating flight with the Boeing 787-10 Dreamliner while the rest of the flights will still be operated with the Airbus A330s. The outbound flight from Singapore on SQ942 is actually pretty sweet, departing Singapore at 0915 and getting you into Bali around noon. The inbound flight on SQ943 leaves relatively early from Bali so it isn’t exactly holiday-goer friendly.

I’ve previously reviewed the Boeing 787-10 on the short hop to Bangkok just last month and liked the seat a lot.

A return Business Class Saver ticket costs 17,500 one-way but we might see lower redemption rates during Singapore Airlines monthly KrisFlyer Spontaneous Escapes promotion. Using my new friend award.flights, I can find quite a number of award flight availability to Bali in the month of July. In the screenshot below, the rows without aircraft types are the flights that are operated by the Boeing 787-10. 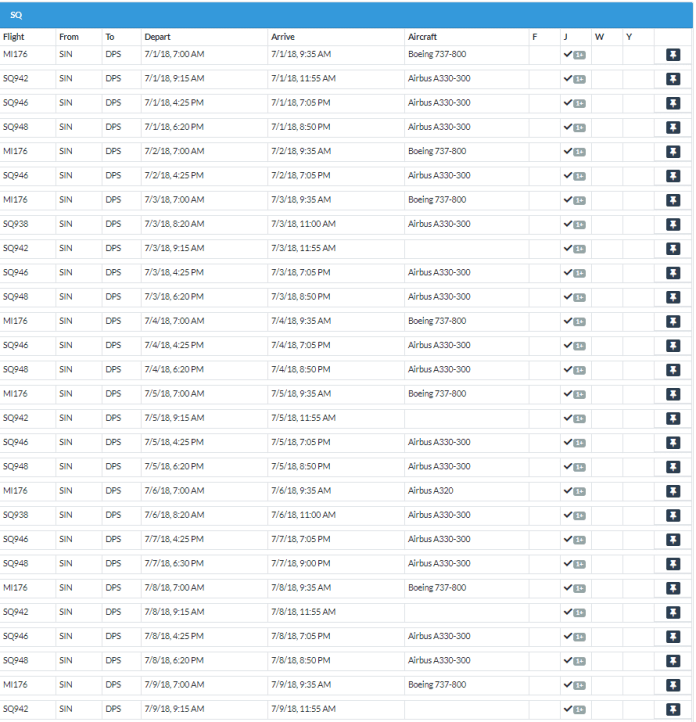 While it’s nice to see more destinations that are going to receive the Boeing 787-10 Dreamliner, I’m still hoping Singapore Airlines will deploy it on longer routes which still use the A330s such as Taipei and Seoul. The only reason I can think of for them not being announced as Boeing 787-10 destinations is that they might be receiving the regional A350-900s instead when the aircraft is delivered to Singapore Airlines later this year.

Matthew Chong
Addicted to luxury travel while trying not to go broke, Matthew is always on the prowl for the best deals in the travel industry. When he's not busy studying, he can be found trawling the internet and reading up on credit cards, airlines and hotels. He also wouldn't mind taking you out on a date.
Previous article
Earn 1 mile for every US$1 spent on your next AirBnB stay
Next article
Citibank offering 12 mpd on Kaligo bookings until 31 July 2018