Your roundup of ongoing airfare sales.

KLM is having its Dream Deals sale which runs from now until 18 September 2018. These fares must be booked on KLM’s website. Tickets booked in this sale are for travel from 15 September 2018 to 15 June 2019.

In this sale, you can travel on either Air France or KLM to destinations worldwide. From South America to Europe, there are decent sale fares to be had. The better deals, however, are to Europe. Fares start from S$746 to Europe on KLM/Air France and if you are looking at traveling within the region with KLM, fares to Bali start from S$206.

Brussels from S$746 is a potentially good deal, with good connectivity options to France, the United Kingdom and Germany.

Here are some of the fares which KLM are offering: 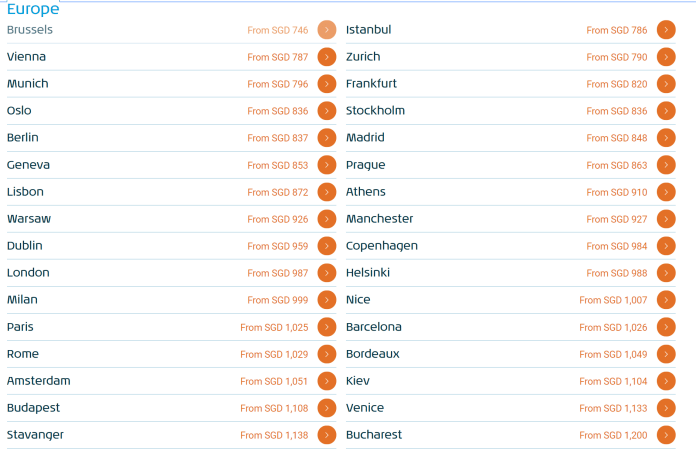 To get to the Dream Deals tab, simply click back to the home page and click on Dream Deals.

Both KLM and Air France fly their Boeing 777-300ER aircraft between their hubs and Singapore and Economy Class is laid out in a 3-4-3 format.

Tickets booked during this sale are for travel from now until 31 May 2019.

Qatar Airways flies their A350 between Singapore and Doha and from Doha to other destinations as well. Economy Class is laid out in a 3-3-3 configuration and if you’re splurging on Business Class, you’ll be glad to know that Qatar Airways will be flying their A350-1000 with QSuite to Singapore from November 2018.

Click here to book your tickets with Qatar Airways

Some great fares include Hong Kong from S$258 and Tokyo from S$578. London from S$998 and Los Angeles from S$1,168 are excellent fares too. You can check out more details of this sale over on the Singapore Airlines website.

Click here to book your tickets with Singapore Airlines

The past week wasn’t an exciting one in terms of airfare deals. If you are able to know your schedule between April to August 2019, I highly recommend checking out the sale which they are running. If you are looking for flights over the December holidays, KLM and Qatar Airways would be your best bet.

If you are unsure of which card to use for your airfare purchases, you can refer to the table below:

Matthew Chong
Addicted to luxury travel while trying not to go broke, Matthew is always on the prowl for the best deals in the travel industry. When he's not busy studying, he can be found trawling the internet and reading up on credit cards, airlines and hotels. He also wouldn't mind taking you out on a date.
Previous article
8 days sale: Hilton offering 100% bonus on Honors points
Next article
Exclusive SingSaver credit card sign up offers are back for September