I don’t normally cover mistake fares on this site, because I’m very slow off the mark and by the time I respond they’re all gone (although there was that one time…)

But FYI: there are some crazy Cathay Pacific First Class fares out of Vietnam which (A) won’t last and (B) probably won’t be honored. If you’re the sort who likes to roll the dice though, you’re welcome to join in.

Fares from HAN/DAD to North America (LAX, SFO, YVR, EWR, JFK) are pricing at ridiculously low rates of US$1.2-1.6K round trip per person. You can find the fares on Google Flights and book them through CX’s official website. 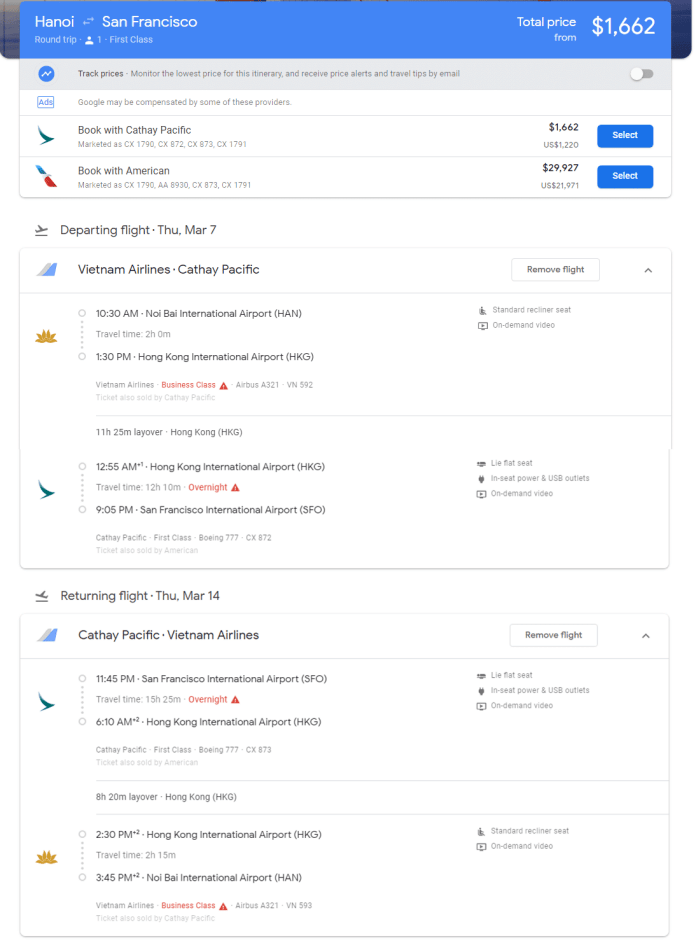 I managed to book two tickets in March via CX’s official website. My payment went through and the e-tickets were issued. I realise it means absolutely nothing if the airline decides not to honor the fares, but hey, nothing ventured… 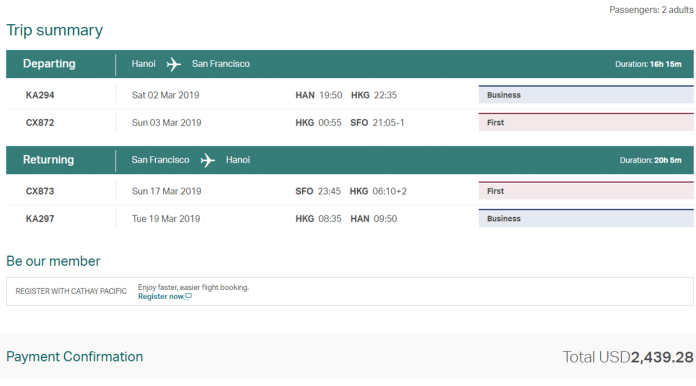 My fare came up to US$1.2K per person, although I understand some people were able to book US$845 fares earlier on.

These fares have a US$300 refund fee and a US$100 change fee, but if the airline unilaterally cancels the fare then you won’t have to pay anything. So there’s very little risk to you if you want to join in, but I should emphasize again that it’s more likely than not that the fare will not be honored.

Let’s be clear about one thing: this is obviously a mistake fare. The airline can choose to honor it out of goodwill. Then again, they can choose not to. I wouldn’t make any non-refundable plans (e.g positioning flights to Vietnam, hotel bookings) until the dust has settled.

Based on past experience, the airline will pull the fares and issue an announcement on their decision whether to honor or cancel the tickets within 24 hours (I can’t see this lasting longer than that). You really have no grounds for insisting that they honor the fare, but it is a reasonable expectation that they’ll let you know fairly soon whether they will. Where mistake fares are concerned, it’s best to take a que sera sera attitude.

You can follow all the developments on this Flyertalk thread.

Exhibit one in Cathay’s defence: “Some hack blogger who could care less about his readers called it a mistake fare so obviously it was and everyone should have known it. We shouldn’t have to honor it”.

hey josh, happy new year! i think it’ll be an interesting day when cathay starts citing blogs as justification for its actions…

You mean, unlike how other airlines have in the exact same situation?

The best you could do is take down this article.

To you guys who were unnecessarily looking for trouble after Aaron took the trouble to share this with everyone, where your snarky comments at now?

Just wanted to say thanks Aaron for the share! Been following this blog for a while now and I still can’t believe I was in on the find of the decade thanks to you! Don’t let people who think that being a FT/miles geek entitles them exclusively to premium cabins shit on the good work you do!

thanks scott- although the only reason I knew about the deal is that someone else shared on FT! so you see, it’s all about paying it forward.

Super deal. Even though I don’t have plans to travel with my 2 yr old effectively taking so many stops from Singapore, I will start keeping an eye for such offers in future. Thanks Aaron for such lovely picks.

Thanks for sharing! We managed to book ticket from HAN – IAD at ~1.4k USD per pax. Fingers crossed!

Wow! That a Court would prosecute on such grounds, yet allow airline to get away with multiple infractions towards basic ‘human decency’ when aircraft has ‘technical difficulties’ is outrageous!

Great news; working hard on it, THANKS! PLUS well done you Aaron, as you got Business class Hanoi to Hong Kong, while Google flights now only offering economy class on that leg, including the Mar 7 & Mar 2/3 dates you chose (deal gone on 2nd now). Deal prices seem to have dropped back lots ex Da Nang too, though still many ex Han. ( Was there some nifty little trick I missed maybe, in GoogleFlights, to make Hanoi Hong Kong J class?: Just put First class, ex Hanoi to all 3 my preferred Nth American destinations. Haven’t moved on… Read more »

my brain hurts reading this. you should post in the telegram group, you’ll get better responses

How do you book one leg Business and the 2nd leg First Class ..?

Hi Alvin… Hope you managed to grab this amazing deal & it works for all who did! I missed out…mostly as I’m such a novice, new even to the Google Flights search process itself plus other logistics: needed faster fingers, as Aaron signalled. It was on Google Flights that I saw the first leg was economy, though I had put First as the search field HAN-YVR. Aaron’s screen shot showed he’d scored J class at least, HAN-HKG. Cathay ticketing but American metal for some routes: also, for other novices, this may be a CX pricing and ticketing, but SOME legs… Read more »