UOB and Singapore Airlines held a joint event at Gardens by the Bay this morning to announce the launch of a new product. 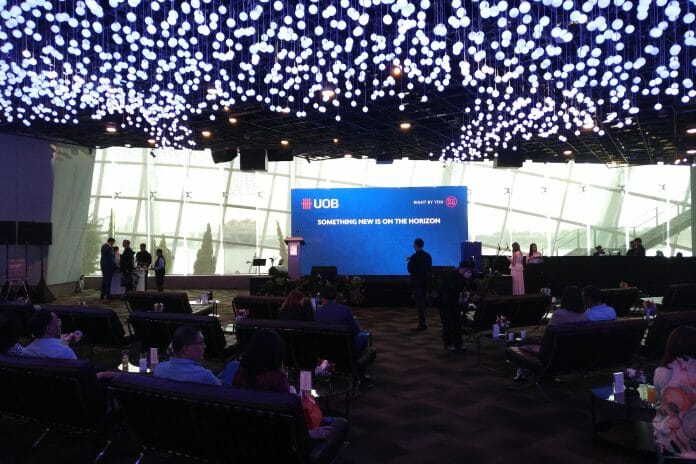 I managed to tag along as the +1 of an intrepid Milelion reader, and here’s what was unveiled: 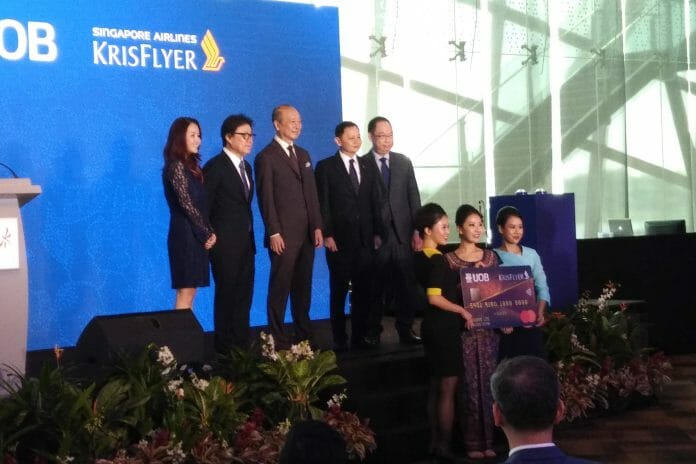 The landing page for this new offering is not live yet, but here’s what we know so far: 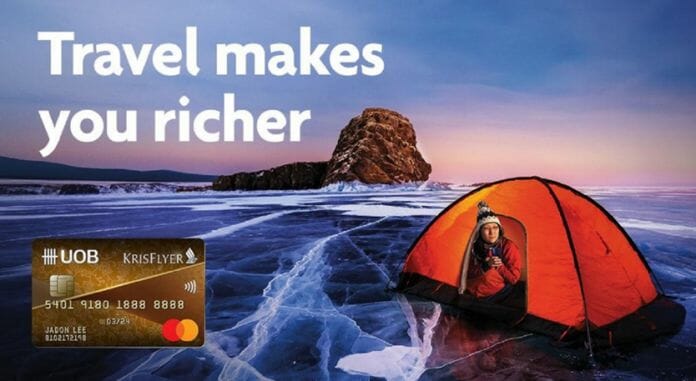 The KrisFlyer UOB Credit Card is available to anyone who earns a minimum of $30,000 a year. Here’s the key features:

At the moment, I don’t have any information on caps. That, to me, will make or break this card. I’ll update the article when I do.

My quick take is that this could be a good card for people who don’t like having multiple cards.

…but there isn’t a card that offers you all that in one. So I imagine that if you’re the sort who wants a “one-card strategy”, then this would be useful to you.

I’m still waiting to learn more about the mechanisms and T&Cs behind the fast track, rebates and other offerings. The devil, as always, is in the detail.

Here’s the handout from the event: 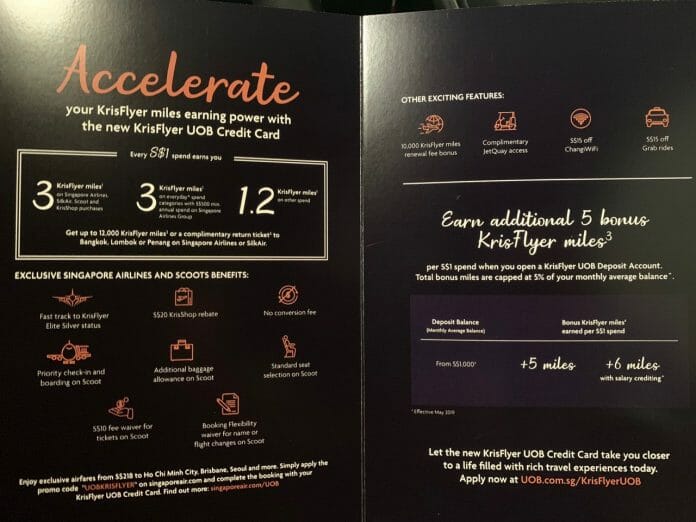 This means you’ll be looking at a paltry 0.05% interest on all your deposits: 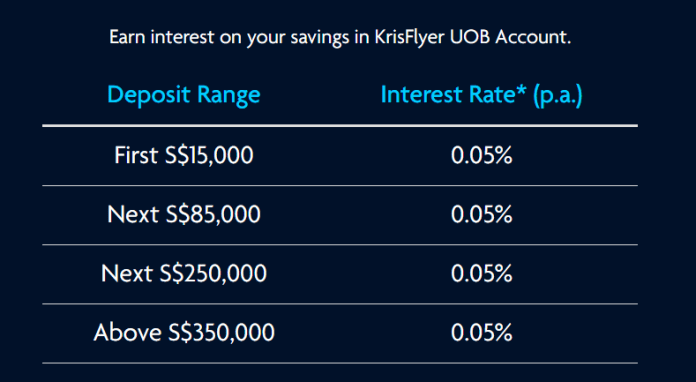 That wouldn’t be so bad if the miles you earned made up for the lack of interest, but that’s not the case.

KrisFlyer UOB Credit Card holders can earn up to a bonus of 5 mpd if they choose to open a KrisFlyer UOB deposit account, but the bonus miles are still capped at 5% of the Monthly Average Balance (MAB). This means that someone with a $50,000 MAB would max out at 2,500 bonus miles, or a mere $500 of spending- all while earning a measly $25 of interest a year!

UOB has added a “hurdle account” feature of sorts, where you earn a 6 mpd bonus (instead of 5 mpd) when you credit your salary to the KrisFlyer UOB Deposit account. But given the cap, it’s hardly worth forgoing the bonus interest you’d earn from crediting your salary to another hurdle account like the BOC Smart Saver, DBS Multiplier, OCBC 360 etc.

In her introductory speech at the event, UOB Head of Personal Financial Services Jacquelyn Tan mentioned that the bank had “learned” from the UOB KrisFlyer Debit Card bank account, but these restrictive mechanics suggest otherwise.

What does this mean for AMEX?

Until today, the only KrisFlyer cobrand credit cards in Singapore were issued by AMEX. UOB’s new offering is certainly a throwdown to the incumbent, as the comparison below shows:

It seems to me that AMEX has opted to go more for tactical promotions, while UOB is doing theirs year round.

That said, given Mastercard’s wider acceptance and the bonuses on dining, transport and online shopping, AMEX will have their work cut out for them in responding to this new product.

On the surface, the KrisFlyer UOB Credit Card sounds like a decent offering. True, the miles on offer aren’t best in class, but I think they’re going for the customer who wants the convenience of a single card (you’d be surprised how many there are out there). What I really need to know now is the fine print attached to each of those benefits, and I’ll pen a more detailed article when I have it.

Unfortunately, the KrisFlyer UOB deposit account remains fundamentally unattractive due to the low interest rates and cap on bonus miles, and this doesn’t do anything to change that.

Interesting offering…
UOB and DBS WWMC usually round down to the nearest $5 for rewarding points. Some of us who are more tactical to the last miles may not choose this card.

But lets see if there’s any good sign-up offer. 🙂

Amex 2mpd is only for SQ & SilkAir, not Scoot.

yup, have added that nuance. there is a bonus 4 mpd for first 300 spent on scoot at the moment.

The wordings on the rewards seems a bit ambiguous to me (as per usual for UOB).
“3 mpd on transport, dining and online shopping (subject to min $500 spend on Singapore Airlines, Silk, Scoot or KrisShop in a year)”, does that mean if we don ‘t spend $500 a year on those, the miles for dining, etc will drop to 0.4mpd or something?

Wonder how & when are they going to award the bonus. Retroactively? Going forward from when spending requirements met? Keeping tabs of the usual bonus awarded the following month on xxth is already quite a handful already.

What are the terms of the ‘transport’ category? Do they mean using ABT or are other features included too? Thank you!

when and where to apply??

I logged into my UOB account and see an offer to apply:
“KrisFlyer UOB Credit Card
Travel makes you richer. Accelerate your KrisFlyer miles earning power on your everyday spend with up to 3 KrisFlyer miles per S$1 spend.”

Tried clicking on the T&Cs but the link was busted.

T&Cs are out at: https://www.uob.com.sg/assets/pdfs/kf_credit_card_full_tnc.pdf

Does it award UNI$ similar to rest of UOB cards?

Nah, should go straight to your KF account on a monthly basis with no conversion necessary.

any idea how it’s done now for the Krisflyer UOB debit card? I assume one of the benefits of a KF co-branded card is that you get your miles credited directly into your KF account?

I am still surprised that Aaron was not invited to the event and had to go as a +1….

Was there today… This isn’t a media event but a private event for selected cardholders. Hence no invitation for him I guess.

Does “transport” also include all other airlines? Because if I can earn 3 KrisFlyer on the dollar for every ticket I book on AirAsia…

Where are the miles
Reply to  Alvin

Seems like there is a problem earning 3 mpd for SIA purchases in September. Only credited 1.2 mpd and HWZ has posts about it. The 14th month reconciliation for bonus miles is going to be impossible.