By flying into expensive airports and flying out of cheap ones, you can minimize the cash payable on an award ticket. Here's how.

Although KrisFlyer no longer imposes fuel surcharges on Singapore Airlines/SilkAir award flights, you still need to pay the taxes and fees imposed by the relevant government and airport authorities. 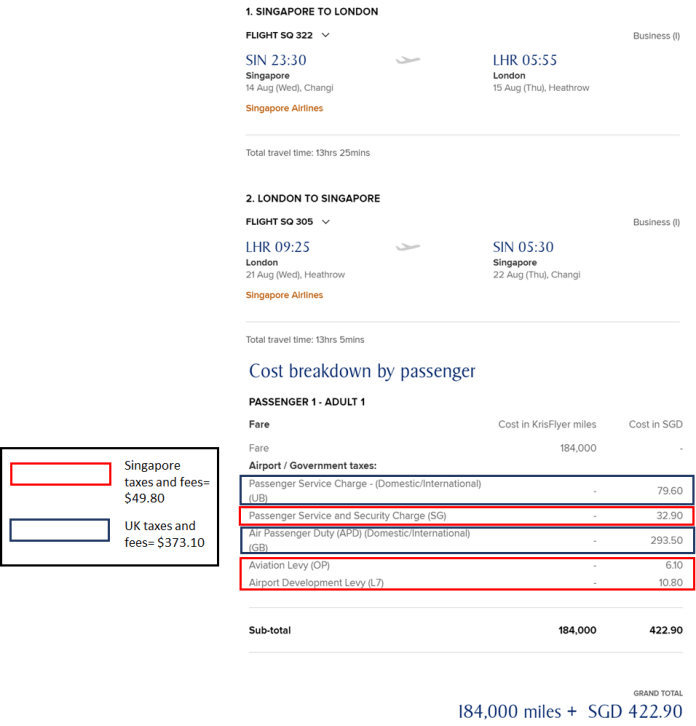 This variability means that it’s possible to minimize cash payments on award tickets by choosing your destinations carefully. For example, instead of flying home from London, why not take the train or buy a cheap flight (<$40 & less than one hour) to Amsterdam? It costs the same number of miles, but saves you almost $350 in taxes per person! 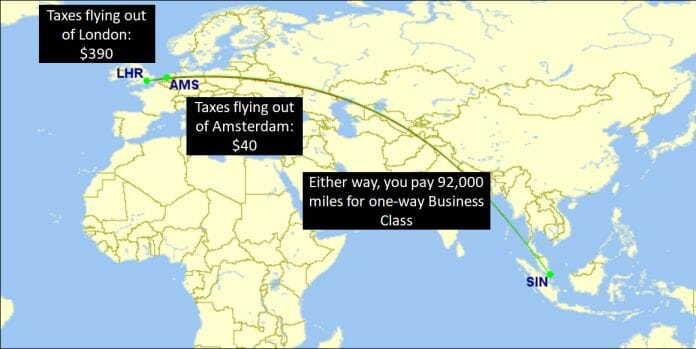 In this post, we’ll identify the cheapest and most expensive airports to fly home to Singapore from, and what that means for your award redemption strategy.

A few general principles to note: 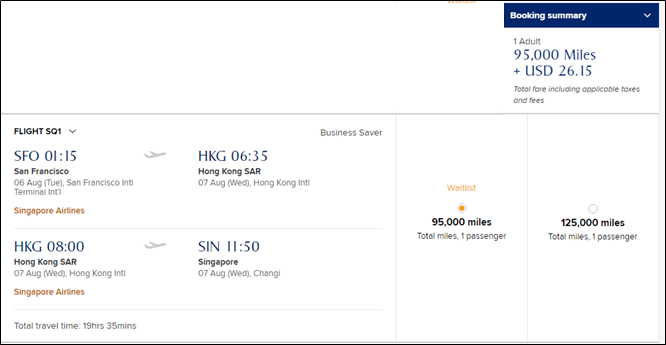 …but flying SFO-HKG-SIN attracts US$26.15 of taxes, thanks to the addition of Hong Kong taxes

Let’s start with Europe, because it’s a classic example of how some clever positioning can save you hundreds of dollars in taxes. Cities in Europe are geographically close, but the difference in taxes can be night and day.

As the map above shows, it’s a bad idea to fly out of Manchester, London, Frankfurt, Paris, or Munich. It’s much cheaper instead to find a budget flight to Amsterdam, Copenhagen, Barcelona or Zurich and fly out from there instead.

This has the added benefit of giving you the opportunity to explore an additional place on your Europe trip.

The USA is much more geographically dispersed than Europe, so the argument for repositioning is weaker here. Moreover, taxes on all the non-stop flights to Seattle, Los Angeles, San Francisco, and Newark are almost non-existent at $8 each. This makes them a superior option to fly home on, assuming you can find award space.

Even when you can’t, the one-stop options from the USA are still much cheaper than Europe.

Australia is similar to the US in that it’s fairly large and taxes are generally the same across cities, meaning there’s little point in repositioning just to save on taxes.

Within the East Asia region, it’s slightly more pricey to fly out of airports in Japan (although note that FUK and CTS are almost half the cost of bigger airports like HND, NRT, KIX and NGO) and Hong Kong. Remember that Hong Kong charges First and Business Class passengers a higher rate of airport tax than Economy passengers, so the picture may be slightly different if you’re redeeming Economy.

India is an interesting case study of how taxes can vary significantly even within a single country. It will cost as much as $36 to fly out of CCU/BLR, but as little as $9 to fly from AMD/MAA.

It’s also perhaps a lesson that what you pay isn’t necessarily what you get. Delhi’s modern airport only charges $8 in taxes, while the less impressive Dhaka charges $92 (presumably to finance the upcoming new airport terminal).

Finally, Colombo may be the city to fly out of for cheap premium fare deals, but it’s actually one of the more expensive cities in the region for airport taxes.

Summing it up: which are the cheapest airports?

So which airports are the cheapest to fly out of?

Well, most people would find it ridiculous if the amount they paid on their “free” ticket cost more than getting to the airport. The signs at Changi say that you should expect to pay $25 for a taxi between the airport and the city, so I’ll use that as a benchmark. 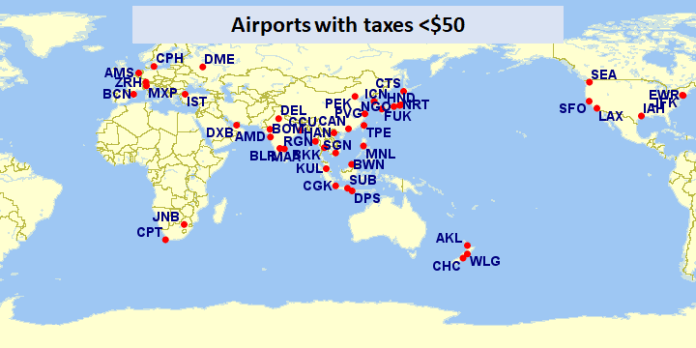 And the airports where taxes cost less than a one-way airport transfer in Singapore. 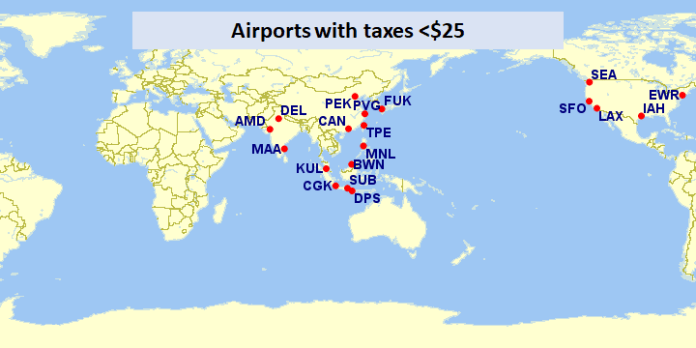 What about flying out of Singapore?

So far, we’ve looked at the cost of taxes flying into Singapore. But that’s only half the picture, because you’ll also need to pay taxes on the outbound leg.

The standard amount of taxes on a KrisFlyer one-way redemption out of Singapore on Singapore Airlines is $49.80, regardless of class of travel.

There are a few exceptions, however, because some countries impose a tax on arriving passengers (because nothing says ‘welcome’ quite like an arrivals tax!).

Here’s how much you’ll pay when flying from Singapore to these 19 destinations:

No one likes paying cash on what’s supposed to be a “free” ticket, but hopefully this guide will equip you to make the best of it by choosing your airports wisely. Remember, if you’re planning to visit more than one city on your holiday: fly into expensive airports (e.g LHR), and fly out of cheap airports (e.g AMS).

I’m including these data points as references in case you want to look up the specific taxes for a given city. I only pulled taxes on Business and Economy Class flights, but keep in mind that with the exception of HKG, MAN, LHR, CDG, taxes will be the same across all cabin classes.

These amounts are shown in SGD, and may vary slightly from what you actually pay due to currency movements.

yes, you’re right. i’ll update this. i could have sworn the transit in MAN attracted some additional taxes, but for whatever reason I can’t find them now

The taxes are higher if there is a STOPOVER but not a transit. Just did SQ11 with a stop in NRT

Comprehensive article, but there are other factors to consider. Using the example of departure from AMS instead of LHR. Theoretical cost savings is $350 (and that’s for one of the most expensive to the less expensive airport). You also need to consider the cost of getting from hotel in london to train station, then from train station in AMS to airport in AMS less the cost of hotel in london to LHR. There is also the additional time involved (travel to train station, station to station and station to airport) plus the inconvenience of moving luggage multiple times. All this… Read more »

Sure, my point is that if you were planning to visit two countries either way, it would make more sense to do london first then Amsterdam, not the other way round. Positioning costs should definitely be factored in

One of the issues in Europe is the limited F routes and availability. No-one wants to slum it in J and with 4 flights per day from London it is much easier to find a seat ex LHR but involves shelling out the extortionate taxes.

ah yes, you’re absolutely right. have updated the post. i kept thinking of london in my example where the APD to short haul is diff from APD to long haul, hence creating such an opportunity.

Another workaround for avoiding the long haul UK APD is to fly shorthaul on a separate PNR. So lhr-(european city)-sin on 2 PNRs is taxed the short haul rate, while the same route on the same airline will be charged the long haul rate. The difference is not insignificant.

Hey Aaron, are you using Tableau for your graphical/map data and stats creation?

i use a software called mekko! hangover from consulting days. maps are gcmap

Nice work. I noticed that some of your “from Singapore” data don’t include Europe. Do I read that right that they all then have a standard rate (e.g. $49.80)?

“For example, flying SFO-SIN direct attracts US$5.60 of taxes…” The screenshot below this is wrong