Register your DBS Altitude card and earn 4 mpd on bus, MRT, taxi and Grab/gojek rides, plus 2.4 mpd on Esso petrol till the end of 2019.

DBS is offering a very compelling offer on transport expenditures from now till 31 December 2019. Both Altitude AMEX and Altitude Visa cardholders can earn 4 mpd on bus, train and taxi rides and 2.4 mpd on petrol at Esso. 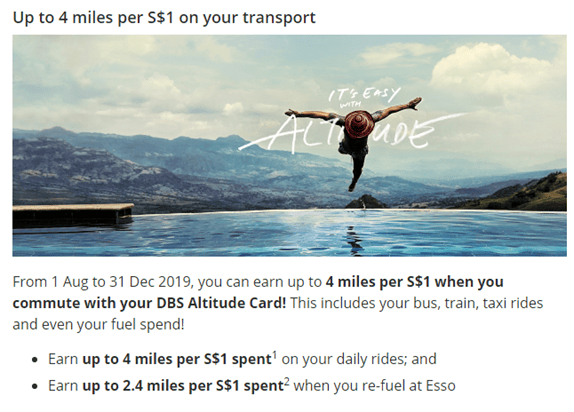 Registration for this offer is required, and the T&C of this offer can be found here. 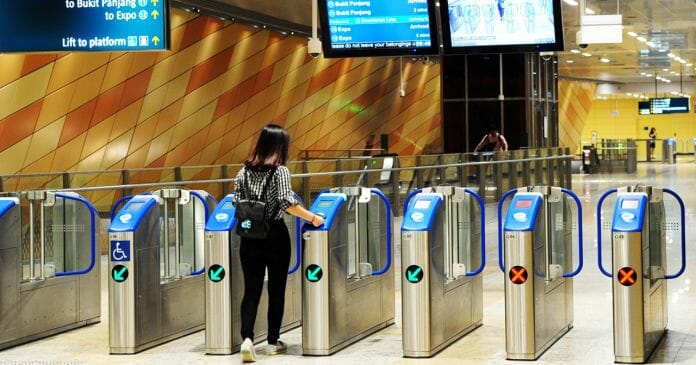 From 1 August till 31 December 2019, DBS Altitude cardholders will earn 4 mpd when paying for the following merchants:

Do note that bus and MRT rides refer to SimplyGo, i.e. where you tap your card directly on the gantry. You will not earn the bonus if you top up your EZ-link card at the GTM stations, notwithstanding the fact these machines accept credit cards.

The maximum bonus miles you can earn on these transactions is capped at S$1,200 for the promotion period, which should be plenty unless you take Grab/Go-jek every day. Also note that this offer will be more useful to those with the DBS Altitude Visa, as AMEX cards are not accepted for SimplyGo. 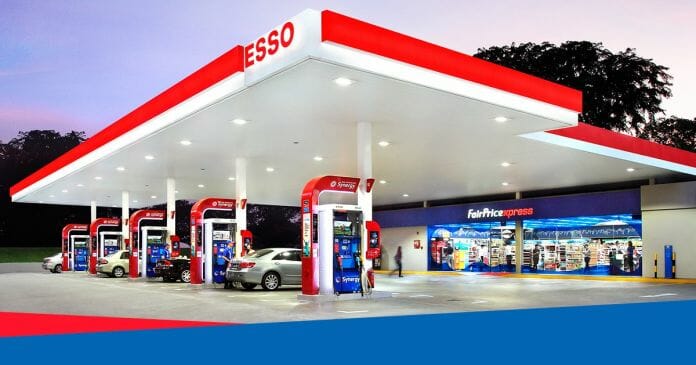 From 1 August till 31 December 2019, DBS Altitude cardholders will earn 2.4 mpd when paying at Esso stations. This requires that you spend a minimum of S$300 nett on fuel in a calendar month, and is capped at S$1,600 nett fuel spend for the promotion preiod. 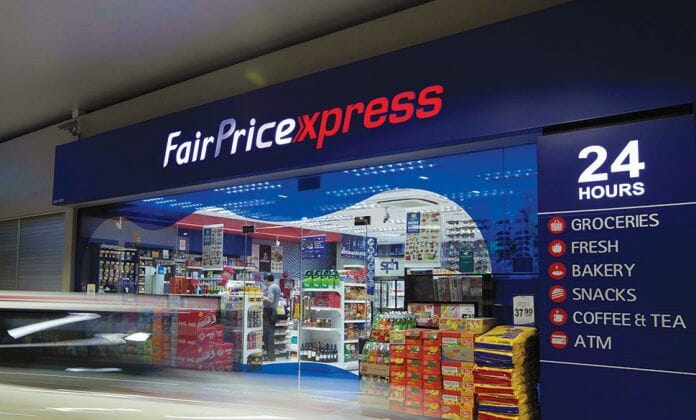 As you may know, Esso sells much more than just petrol- there are FairPrice Xpress outlets at stations where you can pick up some groceries too. The T&C state that this 2.4 mpd promotion applies to “fuel”, but unless DBS has access to Level 3 data from Esso (which they may well do), it’s hard to see how they’d know what you’re buying.

Supplementary cardholders are entitled to take part in this promotion, but it’ll be the principal cardholder who does the registration. The cap of S$1,200 for bus/mrt/Grab/go-jek and S$1,600 for Esso petrol is shared across both principal and supplementary cards.

This is a great promotion, and I’ve updated the Milelion card guide to reflect this latest information.

Aren’t DBS points rewarded for every 5 dollars? SimplyGo transactions are posted daily, which will probably be below $5 for most people. Will there be any points at all?

Nope, the min spending requirement to earn points on altitude is $1.67.

That’s good to know. Thanks.

yup. we want you to take longer public transport rides

You will be billed at a total of 2 rides totaling $1.80 in a single transaction at the end of the day. So there is no reason not to hit the $1.67 mark – Unless you travel by bus one-way to your workplace and someone fetch you home by car.

Or pray for a fare hike…

Visa (on SimplyGo) bills on a ‘per day’ basis, as in, it combines all transaction for the day and bills the card once. If you take two trips, it will usually exceed S$1.67 for the day. Unless, your wokplace is a short distance away and you pay the minimum fare of 2 x $0.83 = $1.66
(MasterCard bills on a weekly basis)

1 mile is worth around 2 cents, will you spend another 1cent to earn 2 cent?

Can you do an article on the minimum amount needed to trigger a mikes earning in various sg cards?

Even if you don’t get the base 1.2mpd, you should get the bonus 2.8mpd when the totals are calculated.

The T&Cs for this promotion clearly state 4 miles for every $1 charged. I think we can rest easy.
https://www.dbs.com.sg/iwov-resources/media/pdf/cards/dbs-altitude-4mpd-tnc.pdf

This is not true. DBS splits up my payment in a single day, and some of my fares under $1.67 earned no miles. After some $10 spend I only got 1 DBS point for this reason (before the bonus points). Not a good deal

Anyone actually tried the SimplyGo for last couple of months? Is it true that the miles still awarded on daily travel of just more than $1.67 instead of min of $5.00?

I ask because when I was verifying miles in the past, it definitely looked like DBS calculation was to award based on blocks of $5 spend (so if spend was, say, $4.95, then would get zero DBS points/miles)

The T&Cs are pretty clear that the points are awarded on a per $1 spend.

Hmm – maybe I’ve been caught out previously so somewhat careful. The promo T&C does refer to the standard earning T&C

That seems to indicate based on blocks of $5 for calculation (at least for base). I hope DBS is fair about it and golly could have written their T&C better/less-confusing.

Agree with you on this point, that the base earn is 3 DBS points per $5 spend. The question is whether the points are awarded based on cumulative month spend, or based on individual transactions posted,f or which SimplyGo VISA will post on a daily basis, and it is unlikely anyone will spend $5 a day on public transport (bus and mrt).

I registered my Altitude Amex but the gantry didnt register and didnt open. Hopefully its a transition and not a glitch -_-“. [Edit] Realized Amex cannot SimplyGo! Opps.

Does anyone know if this applies to Altitude cards added to Apple Pay?

Also what about Samsung pay? Not clear in t&c

You still need to register those cards in SimplyGo.

From the TnCs, does it mean Principal card register on dbs website, and Supplementary card spend on transport will also earn the bonus miles?

Why can’t they make the registration easier for customer? No notification and no credit card check….

You never know whether you are registered or not till more than half year later when you receive no bonus miles….

totally agree. better to use Krisflyer Amex card. Guaranteed 3.1miles per $1 but only up to $200 per month.

Much better than the Insignia promotion to get 1 bonus mile for 2% admin fee from now till 31 December. Looks like a bad rerun of the Altitude 2.2cpm promotion last year

If I hold both the Altitude Amex and Altitude Visa, that means I can spend $1200 + $1200 max on Grab rides correct? Appreciate clarifications 🙂

I called CSO on this. They still unsure as this is a new promo. Supposed to get a call back

Does anyone know if the Auto Top-up of GrabPay credits/ balance qualify for 4mpd?

recently all my Grab ride transaction have MCC code 7399, which is not valid for this promotion.