SimplyGo guide: What card to use and promotions summary

Use your credit/debit cards to pay for bus/MRT rides directly and earn points.

Back in March 2017, LTA and Mastercard announced a partnership where you could use your contactless-enabled Mastercard credit or debit cards on the public transport system. This was known as the Account Based Ticketing system, or ABT for short.

How this works is that you simply tap your contactless card on the fare machines at the MRTs and buses, and the fare will be billed directly to your credit card. ABT underwent a rebranding exercise to SimplyGo earlier this year but the premise of how the whole thing works remain the same.

Fast forward to 6 June 2019, both Visa and Mastercard debit and credit cards are now officially supported by LTA and you can now avoid the hassle of topping up your EZ-Link card at the General Ticketing Machine like a dinosaur and just well, simply go. (yes, I stole their slogan)

I’m pretty sure you’ve been bombarded with sufficient SimplyGo propaganda by now so I’ll skip the mechanics of how the whole thing works and dive straight into which cards should you be using on your daily commute, even if you are just earning approximately an extra 3-4 miles a day.

What cards are supported in the SimplyGo scheme?

From 6 June 2019, all contactless-enabled debit and credit Visa and Mastercard cards can be used to pay for your bus/train fare directly at the fare gates. Even if your card is not contactless-enabled, like the OCBC VOYAGE credit card, you can digitize your card into your mobile wallets and tap your NFC-enabled phone on the gantry as well.

You might want to note that for certain banks, even though your card is contactless-enabled, you will not be able to use your card on the bus/MRT as these cards are supposedly previous generation contactless technology which does not support paying for transit. Also, some banks exclude SimplyGo from supplementary cardholders.

Here are the banks and the cards which are affected:

To get around these limitations, simply digitize your card into the supported mobile wallets and you can use those cards on the buses and trains via your mobile wallet.

Under the SimplyGo scheme you will be able to earn points and miles (and yes, even cashback) when you use your Visa or Mastercard credit cards to pay for your bus/MRT fares. You could already earn rewards when LTA was conducting its “trial” for Mastercard contactless cards back in 2017 which lasted for close to two years and I’m glad to see most, if not all the banks are still allowing the earning of rewards after the official launch of SimplyGo.

For those of you who are wondering, the MCC code for bus/MRT fares is 4111 when you use your card directly for bus/MRT rides. The charge will be posted to your credit card as “BUS/MRT” and this is generally not excluded from the earning of points.

For those of you who are currently using or are planning to use your Visa cards for your daily commute, do note that fare charges are accumulated and posted to your card every day. This is unlike Mastercard, where your card will only be charged every five days or when the accumulated fare reaches S$15, whichever is earlier. You can check this out on the FAQ page of SimplyGo here.

The Visa program started on 6 June 2019 and on the morning of 7 June, I was notified that my card was charged for my BUS/MRT rides:

Here’s a reference table on which cards you can use to earn some miles on your daily commute:

I did not include cards which earn only 0.4 mpd in the above table as there are simply other better cards you can be using. Even earning 1.5% cashback would be better.

You might have noticed the glaring omission of all Citibank cards in the above table. This is because Citibank has excluded all cards from earning any rewards when used for SimplyGo.

MCC 4111 is not in the list of exclusions on the Citibank website and there is also no mention of BUS/MRT* being excluded explicitly, so I’m very curious as why would Citi exclude SimplyGo transactions from the earning of any form of rewards. Back when the Mastercard trial first launched, I was earning 1X points on my Citi Rewards card so this comes as a surprise.

Finally, Note that topping up your CEPAS compliant cards (i.e EZ-Link, NETS FlashPay) at GTM machines will still not earn you any miles. The table above is only for when you use your card directly on the fare machines to pay directly for your bus/MRT rides (i.e transactions which are posted as “BUS/MRT*”).

What promotions are available for SimplyGo?

There are several promotions that are happening for SimplyGo users right now and I’ve hopefully managed to consolidate all of them below. If there are any promotions I have missed out, do sound out in the comments section!

For the first 30,000 cardholders who register for the promotion on the website, you will receive S$5 cashback when you make S$30 worth of eligible BUS/MRT transactions between now and 31 July on your OCBC Visa credit/debit card. This is in addition to the points that you will earn from using your OCBC card to pay for your bus/MRT fares. Both principal and supplementary cardholders are eligible for this promotion.

The rebate will be credited by 31 August 2019. The terms and conditions of this promotion can be found here.

This promotion is only open to principal cardholders of an HSBC Visa card. In this promotion from HSBC, you will receive rebates of up to S$10 on all your bus/MRT rides paid using an HSBC Visa credit card made between now and 5 July 2019. Registration by SMS is required and this is only open to the first 8,000 principal cardholders of an HSBC credit card. If successful, the cashback will be posted to the card by 31 August 2019.

The terms and conditions of this promotion can be found here.

UOB’s promotion is slightly more tricky (as with most UOB style promotions). There are three qualifying periods for this promotion:

In this promotion, you must be the first 10,000 Visa cardholders/first 2,000 new to SimplyGo Mastercard cardholders who register and spend at least S$40 in bus/MRT rides per qualifying period to qualify for a 25% cashback on the amount spent, capped at up to S$15 throughout the promotional period from now until 31 August 2019.

If you make at least one bus/MRT transaction through your mobile wallet using your UOB credit card, you will be eligible to receive up to S$18 cashback, up from S$15, throughout the entire promotional period. You only need to register once and you again, you must be within the first 10,000 Visa cardholders/first 2,000 UOB Mastercard cardholders to clock S$40 worth of transactions within each qualifying period to be eligible for any cashback.

Cashback earned will be credited to your UOB credit card by 30 November 2019. The terms and conditions of this promotion can be found here.

You can find the terms and conditions for this promotion at the bottom of this page.

The first 10,000 users of Singtel Dash who have successfully made payment on bus/MRT rides direct using the virtual Visa Singtel Dash card will be eligible to earn 50% cashback on all their rides from now until 31 July 2019. Your cashback is capped at S$10 per month, per user and the cashback will be credited within 10 business days of each bus/MRT transaction made. 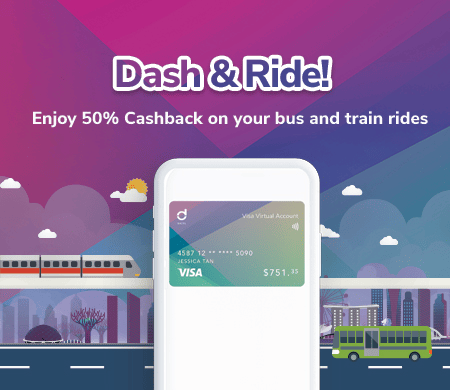 It’s great that we are able to pay for our bus/MRT rides and earn some miles for them. Although these small amounts of miles will not get us anywhere, but every little bit counts. So far, using Google Pay on my daily commute is just a tad quicker than using the physical card to tap on the gantries and I am loving the feeling of just tapping my phone on the gantry without whipping out my wallet. Ah, the 21st century.

Matthew Chong
Addicted to luxury travel while trying not to go broke, Matthew is always on the prowl for the best deals in the travel industry. When he's not busy studying, he can be found trawling the internet and reading up on credit cards, airlines and hotels. He also wouldn't mind taking you out on a date.
Previous articleSCB launches EasyBill for tax, rental, education and insurance: buy miles from 1.43 cents
Next articleHow much will my foreign currency transaction really cost me?

How about DBS Womans Card? Hope I did not miss out anything in the article.

Scroll up, I’ve mentioned why in the article

Does HSBC Revolution still give 2.0 mpd on EZ Reload? If so, seems like it might make sense to use that instead of Simply Go as only the UOB Lady’s and Krisflyer UOB cards give higher mpd.

Yup it still does.

Does it register as a paywave transaction that it would earn 4 miles on the UOB preferred platinum visa?

No it will not.

My phone is not an NFC phone so can I use a physical card or can they only be used with a mobile-wallet?

Which era are you living in? You can use the cart itself.

This explains why we could still earn points from SimplyGO transactions. Simply spend a minimum of $1.67 of bus fares per day, which is easily attainable if assuming two-way trip. (e.g 0.90 * 2 = 1.80)

oh wow yeah. When I checked on Friday evening the wording wasn’t updated. Thanks!

Possible to use dbs wwmc to top up dash and get 4mpd?

If you’re a singtel user, you can top up ur bill and then pay ur bill using DBS wwmc to get 4mpd. Direct credit card top up won’t yield 4mpd

So I shouldn’t use my HSBC Revolution Card to topup my Ez Link card anymore?

There goes kaput, the last compelling reason for using a wallet in Singapore. This will sound the death knell for EzLink, they did have a huge opportunity to ride on the cashless wave, and were in fact ahead of the game before other countries got on to the wallet game.

No longer should topup EZ Link card with miles card?

Oh there’s actually another promotion going on which I received from ezlink on ez-reload.

You earn points on ez-link apps as well when you tap your ez-link card … though the points are insignificant.

From 1 July, HSBC premier master card will have an enhanced benefit, whereby you can earn 5% cashback on transport, including MRT if you send 600 per month.
I guess it’s a good benefit that comes just in time with this simply go program.
I personally feels like this premier master card is useless despite annual fee free…

Just a quick note that contrary to what the article says, I managed to register a supplementary SCB card for SimplyGo and have been using it without issue.