An email sent to corporate clients suggests that Singapore Airlines' flights to nowhere are a go, with a mid-October inaugural date proposed.

On Wednesday I wrote about how “flycations” might soon become a thing in Singapore, with a local aircraft charter firm called SAC conducting some market research on the topic. A (partially-completed) website has been set up, with launch prices of S$288 and S$688 for Economy and Business Class seats respectively.

Under a charter arrangement, the charter company would pay a fixed fee to “borrow” one of Singapore Airlines’ aircraft, with flight crew and pilots provided by the airline. They’d then pocket the difference between whatever they raised in ticket sales, minus the charter fee and associated operating costs.

But it now appears like Singapore Airlines may be planning to go it alone.

Are Singapore Airlines’ flights to nowhere starting in October?

A Milelion reader shared a screenshot of the following email in the Telegram Group. This was apparently sent to a number of Singapore Airlines’ corporate clients, giving them priority access to reserve tickets for an inaugural flight on 17 October 2020. 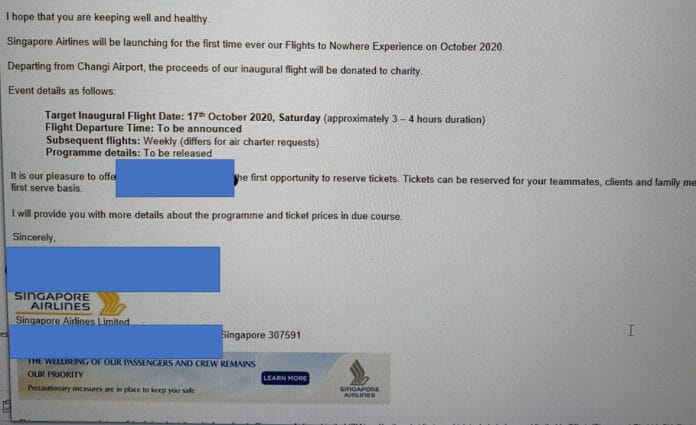 Based on my discussions with a couple of folks in the industry, it’s my understanding this is almost certainly going ahead; it’s just a question of when.

Assuming this is true, what else can we glean from this email?

When will this be announced? 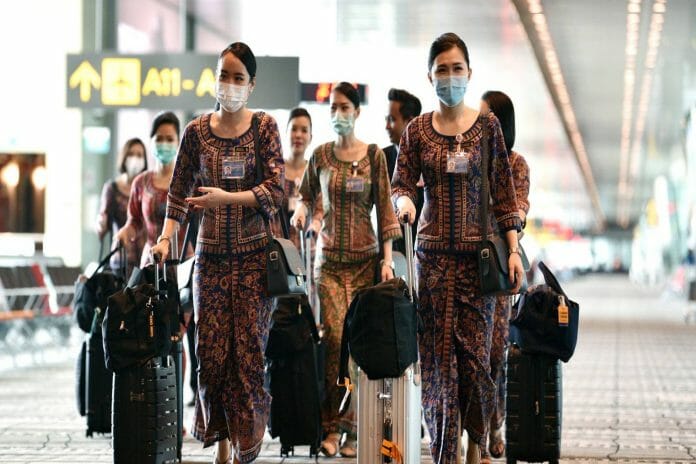 As you’ve probably heard by now, Singapore Airlines has announced plans to retrench at least 2,400 employees, as the downturn in air travel caused by COVID-19 shows no sign of abating.

It’s a sobering reminder that while some of us may be relatively insulated from pandemic’s financial impact and have the disposable income to spend on an airplane joyride, there are others who are much worse off.

Given what’s happening, my guess is that they’ll wait a few weeks before making any sort of announcement.

I reached out to Singapore Airlines for a comment, and got this response:

Singapore Airlines is considering several initiatives that would allow us to continue engaging both our customers and members of the public. We will make an announcement at the appropriate time if we go ahead with these plans.

What’s my take on this?

I get that there are those who are vehemently opposed to the idea of flights to nowhere. “It’s bad for the environment”/ “It’s peak capitalism” are two of the common responses.

With regards to the environmental angle, I think one commenter in the previous post hit the nail on the head when he/she said you could equally make the same comment about pleasure cruises. In fact, according to the New York Times, the most efficient cruise ships emit 3 to 4 times more carbon dioxide per passenger-mile than a jet. Two wrongs don’t make a right, of course, but I think the outrage should at least be consistent.

Moreover, these flights aren’t anywhere close to becoming a daily affair. They’ll be novelty items, run once a week for a few months and then discontinued. Singapore Airlines has already cut thousands of flights, and in absolute terms, the additional pollution from flights to nowhere is going to be negligible (and dwarfed by the reduction in pollution due to the cancellation of scheduled flights).

So it seems to me that the damage here is more ideological than actual, and in any case, given Singapore Airlines’ commitment to environmental sustainability, I’m sure they’ll announce some scheme or other to offset the environmental impact of these flights.

With regards to the peak capitalism critique, well, flights to nowhere are no doubt frivolous in the sense that you don’t need them. But (ignoring the environmental aspect, already addressed above) how is it any different from a staycation, or going to the movies, or any other form of recreational spending? Ultimately, people on these flights are not solving for getting from Point A to Point A. They’re purchasing entertainment, and if getting on a plane happens to amuse them, then so be it.

My take is I’d absolutely sign up for one. While let’s not pretend that any of us are doing these flights for altruistic reasons, if the incremental revenue generated helps save even a couple more jobs down the line, why not?

I also think that Singapore Airlines’ PR team is playing this smart by donating the inaugural flight proceeds to charity. That might help offset a few of the initial negative reactions, and add a feel-good gloss to the whole thing.

While these flights to nowhere are unlikely to be a big money-maker for Singapore Airlines, I do think there’ll be a pretty enthusiastic response nonetheless. Similar flights in Taiwan and Brunei have sold like hotcakes, and there are dozens, DOZENS of us#Avgeeks out there. 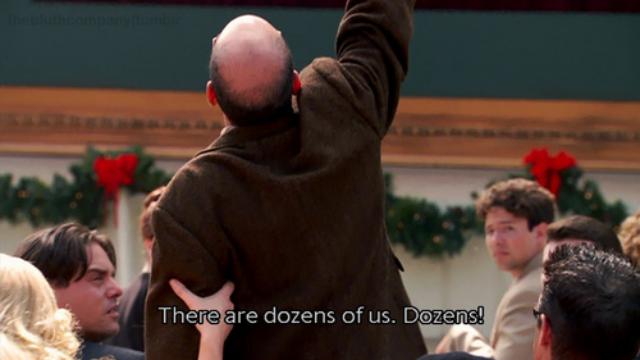 They should consider a twist by having SIN-XSP and vice versa.

Great idea! Inaugural/very rare domestic flight in Singapore is something that might tickle a few of the dozens of avgeeks out there.

I dont mind keeping the boarding pass too! rare moment in history

I think it depends on load. Narrowbody
on the other hand won’t have any issues.

But don’t take my word. I’m not an expert.

Perhaps as “introductory” flights for the SQ-liveried 737s, which are apparently coming soon?

i thought about that! but if the interior cabin product is still the old silkair one, they probably wont want to show off that to the international media.

i guess it’s gonna be something you can redeem with your miles, like the experience thing SIA run during this period.

yes, hoping this comes out for KF experiences

Much as I hope Covid is tackled and SQ gets out of this rut as soon as possible, i find flights to nowhere incredibly pointless. It’s like, how about having a road trip from our HDBs, to… Sentosa. Package it with some al fresco lunch and dinner by the sea, and as this “Mr Wood” claims, people will “lap it up”. Will support SQ instead via KrisShop which I presume they have some commission from sellers.

a lot of speculation and smoke blowing
by s wannabe

Environmental impact will be horrible. Flying isn’t exactly environmentally healthy, and flying nowhere is even worse.

Aviation only contributes 2.5% of all global carbon emissions per year. A negligible amount compared to cars. Shame on the environmentalists who shut down this brilliant idea

Fellow AV geek and mile chaser aficionado here. There’s just gotta be a better way of helping SIA weather the storm than with pointless and environmentally destructive ways . I disagree Aaron about your comment that this is a drop in the bucket compared to the thousands of flights that are being cancelled. With this mentally why wouldn’t you throw your trash out in public since it’s a drop in the bucket compared to the environmental pollution from factories and fossil fuel. We can and need to do better. Here’s a constructive way of doing it. Submit your ideas on… Read more »

Aviation only contributes 2.5% of all global carbon emissions per year. A negligible amount compared to cars. Shame on the environmentalists who shut down this brilliant idea

Cruise ships are a very different experience from flights, people get entertained on a cruise ship while flights are pretty much a means to end. People miss TRAVEL, not sitting on a plane for 3/4 hours in a tight seat, eating cold airline food and arriving back to where they started. Not to mention the same air that they’ll be breathing for that 3/4 hours, definitely not when a virus is still circulating. Wonder if the airline actually considered why would anyone be interested to do that?

but it’s different strokes for different folks. in the some way that people get a kick out of cruises, there are some people, believe it or not, who really enjoy flying. i mean, i know there are some guys who really enjoy taking mrt rides and spotting different trains. i dont get it, i never will get it, i see a train as a means of getting from point A to B. but if they want to spend their money taking train joyrides, more power to them. re: air- HEPA filters on aircraft make the risk of onboard transmission low,… Read more »

Agree to disagree I guess. Cruises come with sundecks, libraries, cinemas, casinos, dozens of restaurants, theaters, running tracks, ice skating rinks, golfing, fishing, balconies, arcades etc (not that I have ever been on one, but I do understand their appeal). So I do believe that’s more whataboutism than a fair comparison.

Let’s hope there will be a scheme to offset the CO2 balance of these.