Could Singapore Airlines soon be taking you from Point A to Point A? A local aircraft leasing company seems determined to make it happen.

With the Singapore government’s travel advisory remaining firmly in place (and New Zealand unceremoniously swiping left on us), stepping foot on a plane seems out of the question for the foreseeable future.

But that’s only if you’re intending to end up overseas. What if you just miss the chime of the PA system, the taste of a convection-oven warmed meal, and the reassuring smell of recycled air?

If so, you might be yearning for a flight to nowhere. This isn’t a particularly new idea, and airlines like EVA Air, Royal Brunei and Qantas have launched or intend to launch such flights that take you from Point A to Point A.

While at this point I’d bite off your hand for a middle seat on a narrowbody, it’s been all silent on the Changi front. Perhaps not for long, though…

A well-placed source sent me a “Flycation SG” survey, which I won’t link to here for fear of messing up their data. This company behind this initiative is apparently a local aircraft charter firm called Singapore Air Charter (SAC).

The survey is just six questions long, but what they ask is quite revealing in itself. SAC is proposing a fly-eat-drink-stay package, which would combine a luxury hotel stay with an “airline joy flight” from Changi to Changi. 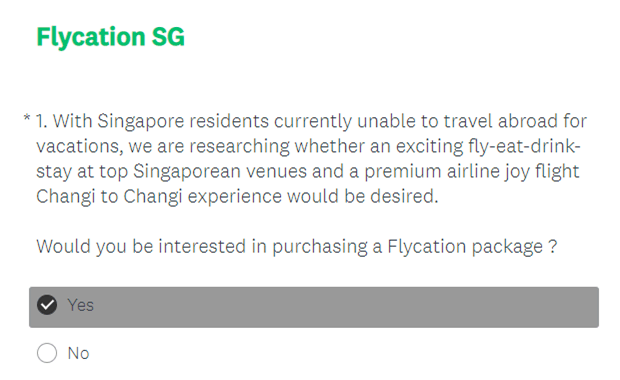 There are also some qualitative questions on what would make this an “ultimate experience” (lots of alcohol, obviously), and whether there’d be interest in packaging the Flycation with a top hotel or restaurant.

For what it’s worth, I’d personally be willing to pay S$300 and S$680 for an Economy and Business Class seat respectively, assuming the flight is about 4 hours long (anything less is too short, anything more might get old). That’s enough time for a meal, a drink, and yes, I fully intend to watch a movie.

In case you think this idea is nothing but vaporware, I did a little digging and came across the Flycation SG page.

A Staycation alone not quite hitting the spot? Want to travel again, back into the skies in a premium flight to nowhere? See Singapore in a whole new light, as the best place to fly eat and stay!

The website is still under construction, but interestingly enough it mentions a “launch special” for Economy and Business Class seats of S$288 and S$688 respectively. 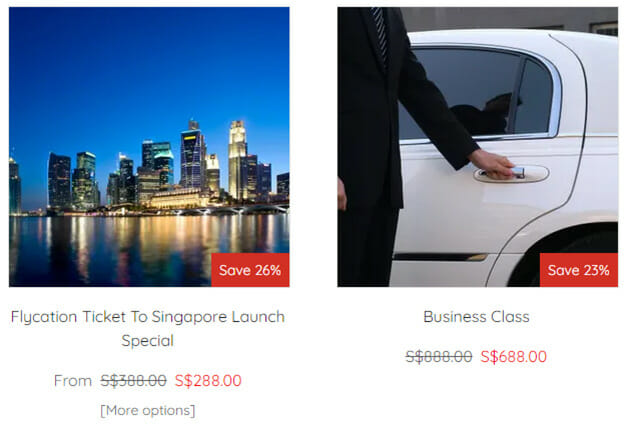 Under the Economy Class option, you can also add a staycation at the Shagri-la (sic) for a further S$488++ for a premium room with meals, or S$358++ for a deluxe (I’m guessing they’ll use the Garden Wing for this, because I can’t see the Valley Wing offered for so little).

According to domain lookup service Whois, the flycation.sg page was created on 18 August 2020, which roughly matches when this survey went live (~1 month ago). The website’s privacy policy references an entity called Flycation Pte Ltd, which ACRA tells me was incorporated on 3 August 2020 as a travel agency.

Will Singapore Airlines be involved?

My understanding is that SAC’s first choice is to charter a Singapore Airlines aircraft, and well, duh. With greatest respect to Jetstar Asia and Scoot (the other two Singapore-registered carriers), neither of them particularly screams “romance of travel”.

At the same time, I’m wondering whether Singapore Airlines will play ball. Flights to nowhere are awfully faddish, and we’re talking about an ultra-conservative airline that’s historically been happy to sit things out (witness their decision to pass on Crazy Rich Asians).

Then there’s Singapore Airlines’ notorious obsession with “protecting the brand”. If they’re willing to let Business and First Class cabins fly out half empty instead of selling the remaining seats for cheap or releasing them for redemptions, what makes you think they’ll suddenly be open to a party plane concept?

Finally, there’s also the environmental and PR aspect. After all, nothing screams “unnecessary travel” like a flight to nowhere, and in a time when people are losing their jobs and getting salary cuts, this may come off as the height of frivolity. It’s not hard to imagine the Straits Times Facebook comments (always a wellspring of enlightenment and measured opinion) lighting up like a Christmas tree.

On the other hand, this would be a perfect opportunity to properly kickstart the beleaguered KrisFlyer Experiences program. KrisFlyer Experiences was supposed to give access to “money-can’t-buy” experiences, but thanks to COVID-19 all we’ve had is a bunch of online whiskey tasting and photography workshops– hardly what I had in mind.

How many miles would I pay for this? If it’s Business Class and four hours, maybe 50,000 miles? If it meant being on the inaugural, I might throw in an additional 10-20,000 maybe (all figures are decidedly POOMA).

What aircraft could be used for a flight to nowhere?

Assuming Singapore Airlines is on board, there are only two possible aircraft that could be used for a flight to nowhere: the Airbus A350-900, or the Boeing 787-10.

The rest of Singapore Airlines’ fleet is in storage, either at Changi or Alice Springs. And while I’d love nothing more than to storm the (boarding) gates of ASP to reclaim what’s rightfully ours, I’m realistic about these things- we won’t see a Singapore Airlines Airbus A380 for another 12 months at least, probably much more.

Both the Airbus A350-900 and the Boeing 787-10. are relatively fuel efficient, and offer a healthy load of 300+ passengers (for the regionally-configured A350 at least)

I suppose it’s also possible that SilkAir’s narrowbody aircraft could be used, but if Singapore Airlines is going to be involved with this, they’re going to want to do it right. A flight to nowhere will probably make the news overseas, and who wants to show off a tired B737-800 cabin?

Are there any other alternatives?

Yes, but they won’t be economical. SAC offers charters for private jets too, but as you can imagine, the smaller capacity will make these prohibitively expensive- probably in the neighbourhood of S$2,000+ per seat:

That would put Flycations out of reach of the average staycationer, and at that point it’s really more of a rich man’s joyride.

While I’d be thrilled if these Flycations became reality, I’m wondering whether the folks at Airline House see things the same way. It seems like an easy way to generate some publicity, earn a little scratch or clear some miles off the balance sheet, but there’s obviously a lot more to the equation that i’m not privy to.

Would you be willing to do a Flycation? How much would you pay?

Aaron Wong
Aaron founded The Milelion with the intention of helping people travel better for less and impressing chiobu. He was 50% successful.
Previous articleCap Removed: Free Dyson Pure Cool Me (worth S$499) with Citibank credit cards
Next articleGet $160 cash upon approval for a Standard Chartered credit card

Which made it really look more like a PR thing, not a “for profit” operation.

haha even during a pandemic, nothing holds fast like the SQ premium.

Pie in the Sky.

Too many security issues loaning a SG plane and loading it while in the ground in the airport. What about immigration also?

Killing the environment for nothing. Disgusting idea.

Yeah. WTF. Personally I only fly because I have to fly. I like travelling to places but flying is the worst part – even in first class. And if I dare to look out the window to admire the majestic view, people give me stink eye because they can’t watch the drivel on their little TV. The world has gone crazy – let me out.

i understand the concerns about emissions, but what if all tickets came with mandatory carbon offsets? would that change the deal for you?

I doubt those work so no.
A better idea would be grounded flights. It’s not really necessary to take off is there? Same experience, less environmental impact

“stay home” might have been the mantra when we were in circuit breaker and community cases were widespread. now that we’re out of that stage, why shouldn’t people be allowed to go out for recreational matters, or even something like getting on a plane?

Thank you for featuring us! The Valley wing deluxe room is the premium room whilst the deluxe room is at the garden wing. The tower wing is closed at the moment.

Sure, let’s kill the environment for nothing. Disgusting!

if look at the Starlux Airlines, their flight to nowhere with staycation bundle were overwhelmed and they are going to have another 6 more flights in early Oct.

why increase carbon for a meal and movie up there? plss.. NO!

I disagree wholeheartedly – I miss flying so much – I would do this in a heartbeat. I know it’s pointless but these are not normal times – so normal rules do not apply!

to all those calling this “a waste” or “bad for the earth”.

are you opposed to cruises too? a cruise to nowhere is pretty much the same- sure, it may not be as polluting (I don’t know what the carbon output is for a ship vs a plane), but the idea is still the same. people are burning resources for *gasp* recreation.

Yes, against cruises to nowhere as well

Come on lah.
Please dont waste fuel and resources.
May as well do a simulated flight ala USS style.

I flew SQ a few weeks ago and the business class catering and cabin service was pathetic. No drink service and it was the most underwhelming food I’ve ever been served in business class. I know it’s a pandemic and there are service cut backs. Save your money and don’t bother. Flying at the moment is not worth it. Also Changi airport is currently no fun at all.

After Cutting 2,400 Workers, Could SIA Sublet Its Planes For “Flycations”? | Live News