The OCBC Premier Banking Visa Infinite won't set the world on fire, but it's an excellent companion to the Titanium Rewards Card.

While it doesn’t have a whole lot of bells and whistles, it earns miles at a fairly competitive rate, and could be a decent general spending card to pair with the OCBC Titanium Rewards.

The OCBC Premier Banking Visa Infinite has a S$30,000 income requirement (or S$10,000 fixed deposit in lieu of income), and no annual fee.

These rates are slightly higher than those earned of the OCBC 90N Card (1.2/2.1 mpd), and remember: the OCBC Premier Banking Visa Infinite earns OCBC$, which pool with the OCBC$ earned on the Titanium Rewards. In contrast, the 90N Card earns Travel$, which do not pool with OCBC$. 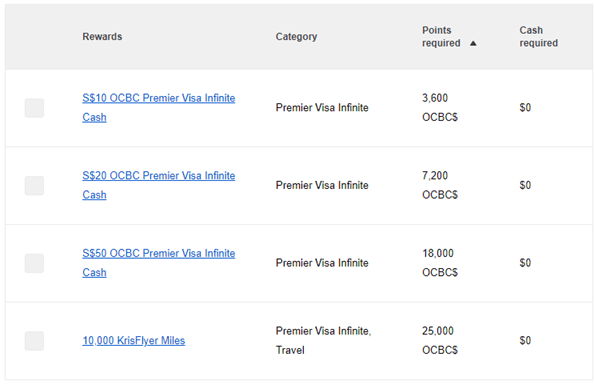 For a more detailed breakdown of exclusion categories, refer to the T&Cs or this post.

How does it compare to the OCBC VOYAGE?

The natural question many people will have on their minds is how the OCBC Premier Banking Visa Infinite compares to the OCBC Premier VOYAGE, the bank’s other high-end offering. Here’s a rundown of the two:

The OCBC Premier Banking Visa Infinite card is made of plastic, as opposed to the metal-clad VOYAGE. But with that comes greater practicality, since the former supports contactless transactions (although you could just as well add your VOYAGE to your mobile wallet to circumvent the issue).

Two complimentary Plaza Premium Lounge visits are granted each year to all cardholders (principal or supplementary). This isn’t mentioned yet on the landing page or T&Cs, but I’ve been reliably informed it’ll appear soon. Most cards don’t award lounge visits to supplementary cardholders, so this could be potentially useful to someone who wants to get his family into the lounge for free.

But apart from that, the rest of the OCBC Premier Banking Visa Infinite’s benefits are generic Visa Infinite ones. This includes things like:

If you want perks like complimentary airport limo transfers or unlimited lounge access, the VOYAGE is a better choice for you. Do note also that VOYAGE cardholders get access to the highly-rated (or so I hear) VOYAGE concierge, while Premier Banking Visa Infinite cardholders are routed to the generic Visa Infinite concierge, which can be hit and miss in my experience.

Finally, VOYAGE customers also have access to the VOYAGE Pay facility, which allows them to buy miles from 1.9 cents each. This is not available to Premier Banking Visa Infinite cardholders, but then again it’s no big loss given how you can easily generate miles at lower cost through CardUp and RentHero.

The OCBC Premier Banking Visa Infinite looks like a no-frills alternative for affluent customers who want a premium card, sans fees. While it doesn’t have too many features, it is a solid general spending card, all things considered.

Think about it: its earn rate of 1.28/2.24 mpd is higher than that of the DBS Altitude and Citi PremierMiles, and you won’t have to bother with conversion fees. You get a couple of free lounge visits, and if you’re already chalking up OCBC$ on the Titanium Rewards, this lets you cash them out to KrisFlyer for free.

It’s hardly going to set the world on fire, but the OCBC Premier Banking Visa Infinite looks like a good utility card to me.

What do you make of the OCBC Premier Banking Visa Infinte?

Aaron Wong
Aaron founded The Milelion to help people travel better for less and impress chiobu. He was 50% successful.
Previous articleAMEX Perfect Vacation: Win Shangri-La & Barracks Hotel staycations, plus 20,000 KrisFlyer miles
Next articleWhat cards should I use with SingapoRediscovers vouchers?

Interesting, you could say the same thing about the UOB Privilege Banking VI and UOB cards.

The UOB PB VI charges an annual fee though. It isn’t fee-free iirc. Plus, you could always earn 1.4mpd with PRVI with UOB. This makes a good companion to OCBC TR as none other OCBC cards has a good earn rate for OCBC$.

The annual fee for the UOB PB VI is waived if you have an AUM of $350K with them, as with the DBS Treasures Amex (although that doesn’t have free conversions). I guess what I was going for is the free conversions, although it shouldn’t matter in the grand scheme of things.

do they accept stocks transferred from another bank.

if not, does that mean they’ll only take 200k sgd cash?

Not entirely sure but my OCBC Securities do not contribute to AUM at OCBC Premier. Only cash, unit trusts and roboinvest count.

Could also be my problem that mine isn’t synced.

hmmm i want this card. but dont want to put 200k cash in unit trusts or roboinvest…

It’s not a really strong card though, unless you are pairing with your titanium rewards for the OCBC$ pooling. Otherwise I think the citi prestige might be a better choice.

If you were to put 200k in aum at OCBC for a card, the Premier Voyage imo is so much better.

it’s not a “must have” card, just good to have if you have titanium rewards already.

cash, fixed D or anything that is liquid enough for them to invest

iirc ocbc premier doesn’t count equities. But they are also one of those premier programmes that don’t charge a fall below fee (at least no one i know has been charged. RM can waive if anything) so put in the 200k cash, get your welcome rewards and take away the 200K if you really want a new CC

oh that is good to know

Could take this if you like the card art. Personally I think this looks way better than the premier debit so there is that draw to use this in place of the debit card (For ATM withdrawals etc.)

Not to be overly critical but should the comparison to the voyage not be the the premier voyage? I can’t imagine any premier customers having the regular voyage card….

indeed, and the comparison has been made in the table and text below.

True – but just as feedback it’s misleading. I know you did the * but it’s still the main voyage card featured and in the calculations. I’m am OCBC Premier client so I don’t worry about the regular voyage card lol. Seriously mate no offence just feedback that’s all

no worries! thanks for pointing it out, it helps me sharpen the writing for the future too.

Most welcome – I’m a huge fan of your blog – I read it every day it’s the best in Singapore – this was meant as helpful feedback. Keep up the great work and take care 🙂

for the infinite card, is there any golf privileges in singapore?