How to get overseas COVID-19 vaccinations recognised in Singapore

Got your COVID-19 vaccination outside of Singapore? Here's the process to get it recognised locally.

Singapore’s vaccination campaign has gone into overdrive, with the goal of fully vaccinating at least 67% of the population by National Day. Almost 80,000 doses are now being administered each day, nearly double the rate from last month. I personally got my second jab in early July, and will be fully vaccinated by the end of this week.

Even with the latest KTV-related setbacks, it’s only a matter of time before restrictions on social gatherings and travel are loosened for vaccinated individuals. In other words, you really want the vaccination badge showing up in your TraceTogether app sooner rather than later. 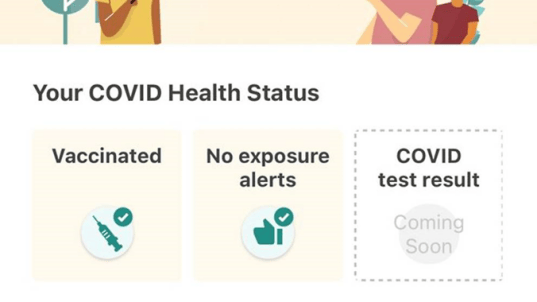 But what happens if you received your vaccination overseas? Can you get it recognised in Singapore?

Recognition of overseas vaccinations in Singapore

Some Singapore residents may have received their COVID-19 vaccination overseas, either because they returned to Singapore recently, or travelled overseas to get vaccinated before Singapore began its rollout.

To do so, they must have received either the Pfizer-BioNTech/Comirnaty or Moderna vaccines, or vaccines on the WHO’s Emergency Use Listing (EUL). Vaccines like COVAXIN and Sputnik V are not yet on this list, and hence will not be recognised in Singapore.

Individuals will need to provide documentation proving their overseas vaccination, and undergo a serology test. The serology test provides an additional means to validate the vaccination status, and can be done at one of the following private healthcare providers in Singapore:

Fees are set by individual clinics, and will not be subsidised by the government.

Should the serology test be positive, the individual’s vaccination records will be updated on the HealthHub portal. Reflection of vaccination status in TraceTogether will be available by late August 2021.

To be clear, an overseas vaccination certificate on its own will not be sufficient for recognition in Singapore.

What about differentiated measures?

The question is whether those who received COVID-19 vaccinations overseas will enjoy similar concessions. MOH states the following:

The current initiative is to facilitate the ingestion of overseas COVID-19 vaccination records for SCs/PRs/LTPHs into the local IT systems as long as they have documentation to show proof of vaccination and their serology test results are positive.

Relating to the differentiated measures which would be introduced later for people who have been vaccinated (whether administered locally or overseas), this is currently being looked into by the MOH. More details will be announced at a later date.

If you got a Pfizer or Moderna vaccination, you’re fine. MOH has stated elsewhere that individuals with these vaccinations will be eligible for vaccine-differentiated SMMs. However, those who received Sinovac, Janssen, AstraZeneca or other jabs not approved under the PSAR will not be eligible:

Individuals who have only received vaccines that have not been approved under the Pandemic Special Access Route (PSAR) such as Sinovac are not eligible for vaccine-differentiated SMMs. This is because there is insufficient data on the extent of the protective effect of Sinovac vaccination.

I do wonder how this will change when Singapore reopens its borders to tourists, though. There will no doubt be a sizeable number of would-be visitors with vaccines from Sinovac, Janssen, AstraZeneca etc., and they’re unlikely to come if they’ll face significant restrictions in terms of what they can and can’t do. As it is, we’re already seeing disagreements over Sinovac being one of the many barriers to (re)starting the Hong Kong ATB.

My guess is the government wants to nudge as many people as possible to take the Pfizer or Moderna shots, before eventually recognizing more vaccinations at a later stage when enough of the resident population has high-quality protection.

As I outlined in this post, I’m cautiously optimistic about the prospect of leisure travel in Q4 should we hit the 67% fully vaccinated target.

Every little bit counts, so if you got your vaccination overseas, you can add to the figure by getting it recognised within the Singapore system.

But how do F&B check those who get jabs other than Pfizer or Moderna?

Why would F&Bs need to differentiate between Pfizer/Moderna and everything else?

“Individuals who have only received vaccines that have not been approved under the Pandemic Special Access Route (PSAR) such as Sinovac are not eligible for vaccine-differentiated SMMs. This is because there is insufficient data on the extent of the protective effect of Sinovac vaccination. “

“Sinovac was recently placed under the Special Access Route for licensed private providers to administer, and various teams are working on a one-time system update to include the Sinovac data.”

F&Bs just follow vaccination status indicated on TT or HH as per MOH guidelines, no need to differentiate.

@aaron Long shot but gonna put in a related topic request anyways (:
Wonder if you could write an article about getting Singapore COVID-19 vaccinations recognised overseas?

That might be… tricky, given how many countries there are out there and how each one would have a slightly different procedure

Exactly why it’ll be helpful to Singaporeans itching to travel! 😬

Thanks, Aaron. Got Pfizer in AU and returning SG next month. For now, there is no concession for SHN requirement for fully vaccinated, but hopefully this will change in next month.

really hoping for some good news in august!

The serology test is around $30 and requires blood to be drawn. Advice from a family friend who is a GP was, as long as more than 2 weeks have passed, just have a 2nd vaccine in Singapore. Free and will provide better and longer lasting protection…

That does sound like a very selfish waste of a scarce resource. Just man up and draw some blood.

I would agree. Either option is a waste of resources, regardless of who is paying for it. Perhaps the best solution is for a less bureaucratic response and to just accept NHS issued vaccination records along with other credible and verifiable nations

Could you do a post on how to get local Singapore vaccinations recognised overseas? For example, there’s Notarise[1], but is it recognised in the EU and compatible with the EU digital covid certificate[2]?