Singapore Airlines has devalued the rate for redeeming KrisFlyer miles under the miles + cash scheme, effective 17 August 2021. KrisFlyer members will now need to redeem 1,050 miles to offset S$10 of fares or payments, instead of the previous 980 miles.

This was added, almost as a postscript, in an email sent out yesterday announcing the launch of KrisFlyer for Families. 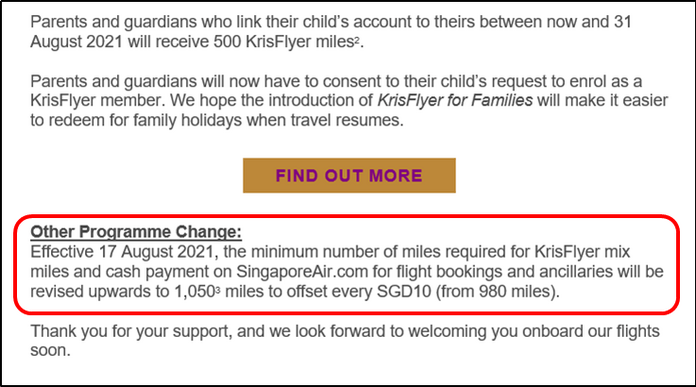 I can’t say they’ve given a whole lot of notice here, but frankly speaking, this would never have been an option for any serious miles collector anyway.

Effective 17 August 2021, KrisFlyer members can offset fares or ancillary expenses at a rate of 1,050 miles= S$10, instead of the previous 980 miles= S$10. Singapore Airlines has mentioned that the actual rate might be a little lower or higher, depending on currency fluctuations.

As it stands, the revised rate represents a decrease in value per mile from 1.02 cents to 0.95 cents each, or a 6.7% devaluation.

What is Miles + Cash?

For the uninitiated, Miles + Cash is different from an award redemption.

With Miles + Cash, your seat comes out of total available inventory, which means that so long as a seat is available for purchase, you can pay for it with Miles + Cash. Each mile has a fixed value, regardless of what cabin or route you choose.

With award redemptions, your seat comes out of award inventory, which is a subset of total available inventory. It’s perfectly possible that a given flight has seats for sale, but none open for awards. The number of miles required will vary depending on your cabin and route, as will the value you derive per mile.

To put it another way, if you want to use Miles + Cash, get to the end of the booking process and check the “pay with KrisFlyer miles” box.

If you want to redeem an award ticket, click “redeem flights” at the start of your booking process.

Should I be using Miles + Cash?

In so many words, no.

The best use of KrisFlyer miles is for a flight redemption, preferably in First or Business Class. Redeeming them for anything else entails a massive haircut in value, as the table below shows.

The only situation where I could sanction using Miles + Cash is if you have a small balance of miles that’s going to expire soon- and even that won’t be an issue for a while, given how Singapore Airlines has extended all miles until at least April 2022.

While some Cassandra types like to declare every KrisFlyer adjustment as the harbinger of an award chart devaluation (and if it makes them happy, they’ll eventually be proven right), I’m relatively more sanguine about the changes.

Miles + Cash was never a good option for using KrisFlyer miles, and while some additional notice of the devaluation would have been nice, it’s ultimately of little consequence.

Given that there are so many miles chasing air tickets when travel resumes, would miles devaluation happen once travel is going to start?

listen to some opinions from industry experts here: https://milelion.com/2020/05/13/upcoming-webinar-covid-19-and-the-miles-game/

The longer this goes on, the more likely devaluation is, to be fair. My opinion on this has shifted slightly because you have an order of magnitude more miles in circulation 24 months in to this situation than you did 2-3 months in. Also, capacity is going to stay depressed for longer than originally expected, airlines will disappear or their networks will be drastically smaller, so there will be some serious capacity constraints. More miles chasing fewer award seats IS a devaluation even if the award charts don’t change. Previously I would have said that travel would gradually recover so… Read more »

yup that’s a good point too. I think it’s well worth making a few speculative bookings for Q4 2021 to Europe. I’m seeing plenty of J saver on SIA to Rome, Zurich, Frankfurt among others.

Do you actually have data that there are more miles chasing fewer seats because of the long covid-19 situation? How do you know people haven’t burned their miles on other redemptions, like Aaron did? Perhaps the uncertainty around airlines becoming insolvent has encouraged people to redeem more miles instead of stashing them?

If the HK bubble was any data, the value of miles increased against air fare as prices skyrocketed more than miles required (comparing revenue rates against having to redeem advantage instead of saver)

True, people stashing all their miles and refusing to redeem is a huge assumption. Personally 2 months into covid i had a lot more miles than now, I was sitting on 2m miles and did not burn them, expecting flights to resume in some time. Now almost 2 years in I’ve chosen to burn most of my miles and only have a fraction what I had 2 months in. We don’t have data on how many people decided to burn their miles, and how many are just accumulating miles without redemption, to just assume that there is more in circulation… Read more »

Yes, I do. Industry insider here 🙂

And what is that data?

Many airlines have no natural points expiry. Obviously for KrisFlyer there would be a different dynamic since if nobody can travel for 3 years, KF will either keep extending expiry or everybody will burn miles on whatever they can to get some value, however minimal. To be clear I don’t necessarily think devaulation is coming in the sense of “OMG now it’s 100K miles to Hong Kong in economy!” but simply that your miles will be less valuable due to reduced opportunities to use them because of greater demand and lesser supply. Normally raising redemption rates helps address that issue… Read more »

Award devaluation is coming next…

Lol. I see what you did there.

someone playing too much RE Village.

i think the miles devaluation may not come so soon even there is a lot of miles floating around. When air travel resumes, not many may want to travel immediately.

if many seats are available for redemption, it will entice ppl to redeem and create an impression that airlines are doing good business.

and this will create a positive feedback loop and stimulate more demand.

den we may start to see a devaluation in the miles.