Business Class passengers will soon be able to enjoy Piper-Heidsieck Brut Vintage 2012, but the bubble bursts for Premium Economy.

For those of you who love bubbles, there’s some good news and bad news on the Singapore Airlines champagne front.

The good news is that Business Class passengers will get an upgrade to the highly-rated Piper-Heidsieck Brut Vintage 2012, effective November 2021. The bad news is that after six years, champagne will no longer be served in the Premium Economy cabin.

Perhaps in response to feedback, Singapore Airlines has decided to offer Business Class passengers an upgrade to Piper-Heidsieck Brut Vintage 2012 from November 2021 onwards. In fact, it’s already appeared in the wild on certain flights; a Milelion reader sent in the following photo from SQ38 to Los Angeles.

Piper-Heidsieck Brut Vintage 2012 retails at S$74 on iShopChangi, although obviously retail prices are a poor indication of how much Singapore Airlines is actually paying per bottle.

Even more impressively, Singapore Airlines tells me that this change is permanent, and not just a limited-time rotation (like Tattinger Comtes de Champagne in First Class). A spokesperson said the following:

We will be permanently changing our champagne label to the 2012 Piper Heidsieck from 1 November 2021. The change will be implemented by routes, starting with the US and Europe services, followed by Australia and South East Asia services at a later date

Piper-Heidsieck Brut Vintage 2012 holds a 4.2 rating based on crowdsourced reviews on Vivino. Here’s the description from the inflight menu:

Champagne is celebrated the world over and Piper-Heidsieck is one of the most recognizable and famous Houses of the region. As with most Houses, the majority of production is non-vintage. However, they also make a small quantity of highly prized vintage champagne in the best years that reflects the growing conditions of a single season. 2012 was considered an exceptional year as the wines are long living with excellent acidity and flavour concentration. This wine made by chef de cave Regis Camus is a blend of 52% Pinot Noir and 48% Chardonnay sourced from approximately 18 Grand and Premier Cru sites. An excellent champagne from a highly rated vintage.

While I certainly enjoy my champagne, I don’t consider myself to be anywhere near competent enough to comment on it. So I turned to Gary Low, Head Sommelier of the Michelin-Starred Burnt Ends, who had this to add:

This Piper Heidsieck 2012 is easy and approachable on the palate. The wine is exuberant on the palate, and the pearls of bubbles glistens under the cabin lights. The blend of 48% Chardonnay and 52% Pinot Noir adds clarity and depth when sipped. Notes alongside green apples, pomegranate, yuzu zest, lime, and ending with a touch of vanilla and cinnamon. Perfect as an aperitif, as a welcome drink, and/or paired with fresh seafood such as lobster, chilled prawns, light soups, or a nice mesclun salad.

Is it better than Laurent-Perrier then, Gary?

There you have it.

For the record, this isn’t the first time Singapore Airlines has served a vintage champagne in Business Class. Back in 2002, Raffles Class (the old name for Business Class) passengers enjoyed a “multi-vintage” Piper Heidsieck Special Rare Cuvee, and there might have been some other upgrades along the way (old timers, share with us your wisdom).

What happened to champagne in Premium Economy?

While it’s good news up front, the mood’s a bit more grim further down back. Singapore Airlines has confirmed that champagne is no longer available in Premium Economy. Said the spokesperson:

Champagne is no longer available as a premium economy class offering

A glance at the inflight menu shows red and white wine options, but no more bubbles. 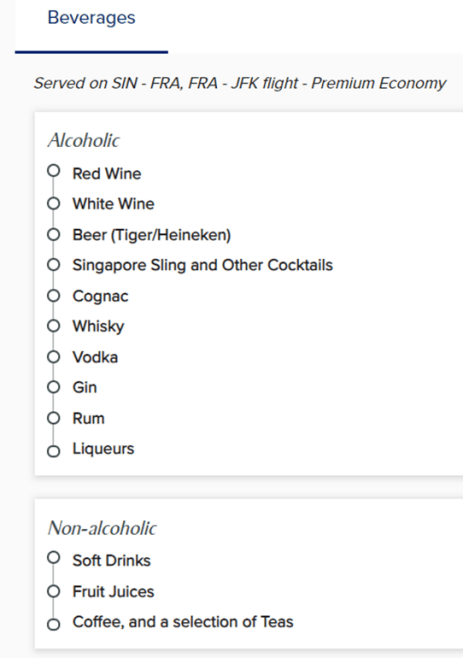 Lest we forget, champagne was a major selling point when Singapore Airlines launched Premium Economy back in 2015. They initially served a very decent Ernst Rapeneau Brut, which later became a Champagne Jacquart Cuvee. I liked the latter enough to buy a few cartons through a friend with an SIA staff lobang.

Yes, the champagne was served in a small plastic glass, and refills were sometimes hard to come by. But it was champagne, dammit. How many airlines offered that outside of First/Business Class?

Singapore Airlines might want to update their website, since it’s still reflecting champagne as an perk of Premium Economy Class…

Business Class passengers on Singapore Airlines can look forward to a champagne upgrade soon, with the highly-rated Piper-Heidsieck Brut Vintage 2012 set to become the standard pour. However, Premium Economy Class passengers will have to drown their sorrows in a different sort of tipple, as champagne gets removed from the cabin.

For those in First Class, it’s still the usual Krug/Dom conundrum- poor you!

Damm. So they have made the already poor value of a PEY redemption even less appealing. It wouldn’t hurt them to offer a Prosecco to at least give the illusion of some fizz and glamour….

yeah i was just thinking that. i mean it’ not difficult to get a cheap prosecco or cava, especially if you’re buying in the bulk that SIA is. and there’s just something fun about bubbles especially if you’re a honeymooning couple or just celebrating a special occasion.

Airlines should never underestimate the appeal of a glass of fizz, especially to the infrequent flyer. I still recall the time I used my Qantas points to send my parents from Sydney to London and back in Qantas’ A380 premium economy. There I was, telling Mum and Dad all about the more comfy seat, the cosy upper deck cabin, the extra legroom, the better meals, but the thing Mum kept talking about and telling her friends about, and still the only part of the flight she cites to this day, was that they served her a glass of Champagne before… Read more »

I don’t think Airlines doubt the appeal of the champagne. The question for them is more whether they should serve it in PEY or they should make it a bigger difference between PEY and J, ultimately the airline wants more people to pay for J seats than PEY seats.

Sure, if that’s the thinking I will pay for business class. Lie flat, better meals and drinks. Except that I will pay ANA if I am going Japan and Qantas if I am going Australia. Had flown business on the latter and PEY on the former, and the VFM factor is higher.

Interesting, the PH rare in the private lounge still remains one of the best champagne offered by sq. I think PH 2012 is a backwards step, bring back CH NV!

so no more Laurent Perrier in business class?

Its a terrible decision. As it is the hard product is nothing remarkable (the QF and CX products are arguably better), anyone can bring their own noise cancelling headsets, same food as economy now book the cook is no longer available during this period. Personally, i’d not likely consider PEY anymore and save my money on economy or take another airline if i want a treat.

Because SQ Y product is good. The distinction between them is just slim

So other than better seats now, whats the difference between PEY and EY?

Not necessary better if Y payload is low. You may lie flat in 3/4 abreast Y seats but no way you can do that in PY.