Earn 150 KrisPay miles with three check-ins every week on the Kris+ app.

Hands up, who remembers the Mileslife check-in function? Users who visited the app daily for seven consecutive days would earn anywhere from 10 to 200 free miles, just like that.

Mileslife is dead and gone, but Kris+ (which in a way is kind of its spiritual successor) has now launched its own check-in feature, offering users 150 KrisPay miles (worth S$1) for completing three check-ins over a week.

For reasons I’ll explain later, it’s not quite as good as the Mileslife check-in function, but hey, it’s free miles… 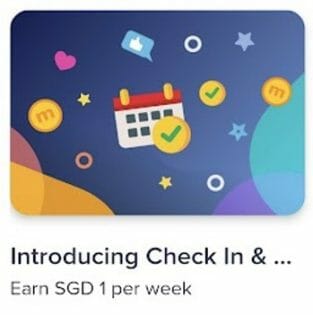 Kris+ is now offering a new check-in feature under its Challenges section, which awards 150 KrisPay miles with three check-ins per week (a week runs from Monday 12 a.m till Sunday 11.59 p.m).

To find this feature, tap on “Challenges” on the home screen, then “Complete to win 150 miles”. 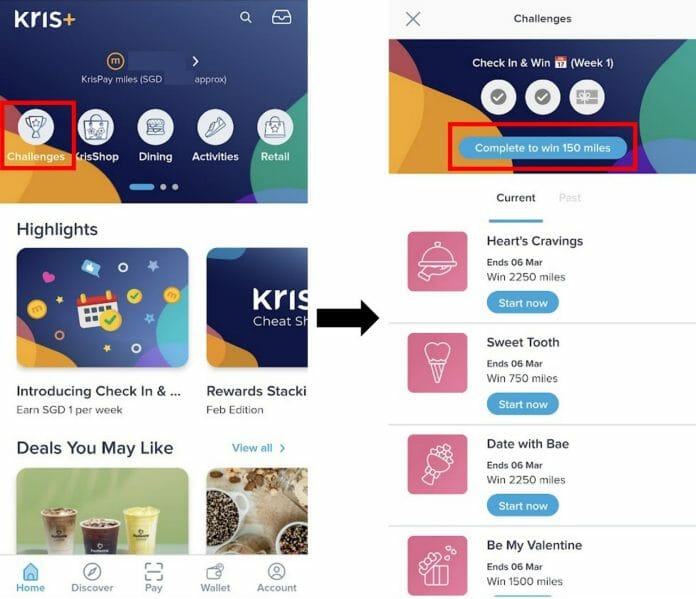 Tap on “Complete to win 150 miles” again, and your check-in will be registered. The button will then be ghosted for a 24-hour period, after which you can check-in again. 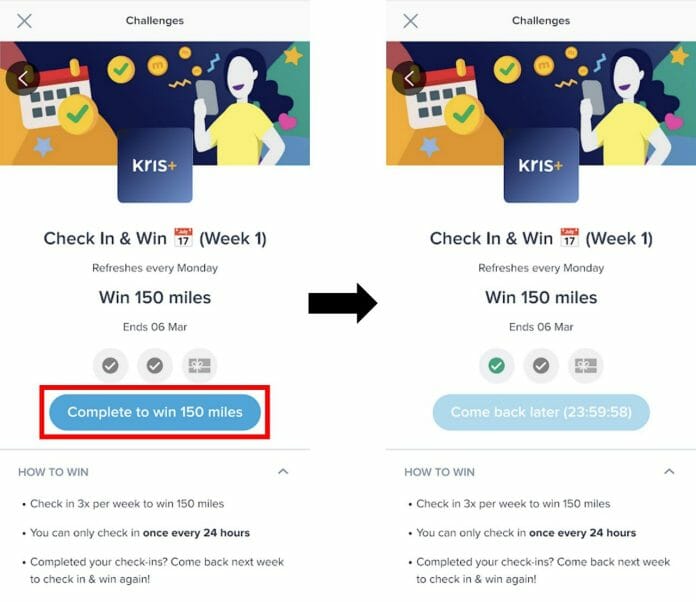 Since you only need to check in three times in a week, it doesn’t matter if you miss a couple of days; the check-ins need not be done consecutively.

How useful is this feature?

Free miles are free miles, but you shouldn’t feel too much FOMO if you neglect to use the check-in feature.

First of all, any KrisPay miles earned through the check-in feature must be spent through the app; they cannot be transferred to your KrisFlyer account.

Third, Kris+ has a relatively low redemption threshold of just 15 KrisPay miles (S$0.10), so it’s not like these check-in miles help you reach the next redemption block anyway.

So yeah, check-in if you want, though it’s not going to have a significant impact on anything (except Kris+’s DAU metric, which I suppose is the whole point of this!).

Kris+ has launched a check-in feature, which awards 150 KrisPay miles for checking in three times in a week.

It’s not a terribly useful feature since Kris+ balances have a 6-month fixed expiry, and you can’t transfer the miles earned to KrisFlyer, but free is free.

Will you bother checking in with KrisPay?

Is the app down currently? Cant sign in at all to check in

No issue checking in, but the reward has slashed by half to 75 miles. LOL

I heard! Free 50 cents- can use for ntuc trolley