Mileslife has suspended all operations in Singapore, and it'd take a brave man to predict a comeback.

I was a beta tester for the Mileslife app back in April 2017.

I still remember the session. We met at Takujo Japanese Dining in Emporium Shokuhin at Marina Square. There were maybe 10-15 of us. We spent about 2-3 hours reviewing various features of the app and providing feedback on the UX. For our time, we each received 5,000 miles.

Two months later, Mileslife launched in Singapore. The initial merchant list was small, but quickly grew to more than 500 restaurants plus many more activities, hotels, spas and retail partners.

From the perspective of a Singapore miles collector, the app was a game changer. There were crazy opportunities to earn up to 12 mpd on dining, with no cap. You could get free miles just by checking into the app every day. You could convert steps into miles. You could double dip on a no-cap 6 mpd by using it with the OCBC Titanium Rewards card. You could earn “exotic” points currencies like Lufthansa Miles and More, United MileagePlus and Avianca LifeMiles, all of which weren’t available here prior to Mileslife. All in all, it was a very, very exciting time for the miles game in Singapore.

Emporium Shokuhin is no more. It closed its doors in September 2018 with debts of more than $1M and no profit since day one. Perhaps there’s a sense of poetic symmetry then that after weeks of uncertainty, Mileslife yesterday announced the suspension of all operations in Singapore. 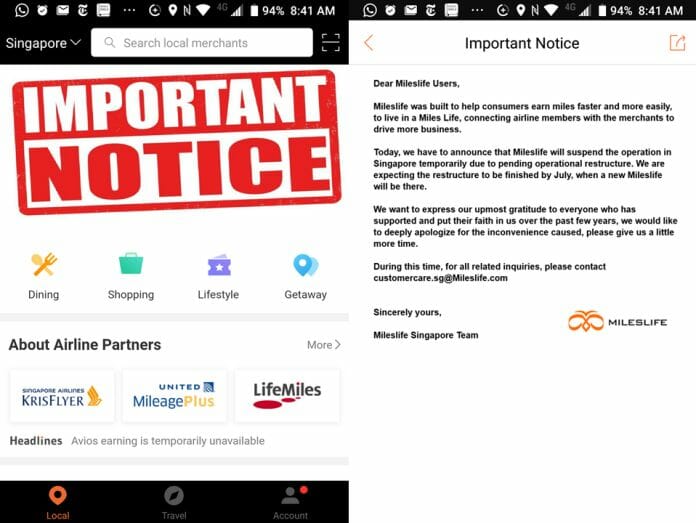 The note calls the suspension “temporary” and alludes to an “operational restructure” that should be completed by July. While I would absolutely love to see Mileslife emerge from this leaner and stronger, the realist in me knows that it’s highly unlikely.

Merchant trust is gone, and future credit terms are likely to be highly unfavorable. Customers will be too spooked to provide low cost working capital through credit top-ups. Frequent Flyer Programs will be hesitant to associate their name with the platform. Short of a buy-out and complete rebranding, it’s just very hard to see this as anything other than the end of the road.

What’s remarkable to me is how fast it all unraveled. I suppose it’s part and parcel of being a privately-held company that all cards are held close to the chest, but until last month I think few of us had any concerns about the future of Mileslife.

Then in mid-April, a disgruntled merchant in China took to social media to complain about non-payment of funds due, and it all went south from there. Shortly after, British Airways Avios suspended its partnership with Mileslife, and other FFPs followed suit. Singapore Airlines suspended Mileslife transfers on 22 April, and has since removed all references to Mileslife from its website. OCBC sent a message to all VOYAGE customers informing them that their partnership with Mileslife was ending (but promising to make all customers whole).

Merchants which were still listed on Mileslife stopped accepting payment through the app; one user reported that no sooner had he paid at Crystal Jade that the branch manager got off the phone and told the cashier not to accept any more. Staff were let go, campaigns were halted, and the app became a husk of its former self.

If this is indeed the end of Mileslife, then it’s a very sad way to go.

If you bought Mileslife credits, I certainly hope you’ve had the chance to spend them. Mileslife does offer credit refunds less a 15% administrative fee, and I’ve heard that some customers who took this option back in April got their money back. It’s worth dropping an email to Mileslife customer service ([email protected]) to see what can be done, but I’m not optimistic.

Mileslife credits are not classified as a widely-accepted Stored Value Facility (WA SVF) by the MAS, and therefore, there’s no bank guarantee of the outstanding stored value.

Mileslife’s demise might spell opportunity for KrisPay. Back in March, KrisPay finally added an earning function for selected merchants, with up to 2 mpd available. At the time, I wondered what this meant for Mileslife, given that KrisPay had historically been a burn-only solution (and a pretty abysmal one at that, valuing your miles at 0.67 cents each).

KrisPay’s main weakness has always been their lack of merchants; about 35 at last count, almost a year after it launched. What’s more, while Mileslife handled payment and accrual simultaneously, payment through the KrisPay app is not possible. You pay the merchant normally through cash or card, then scan a QR code on the KrisPay app to earn miles- a decidedly less seamless process that creates the possibility of missed claims.

KrisPay now has an opportunity to become the miles payment app in Singapore, assuming it refines the accruals process and doubles down on merchant sign ups. As I’ve said before, I can’t believe that SIA management would invest all that time and resources just to have an ecosystem of 30-40 merchants.

Whatever you think about the final few days of Mileslife, few would argue that the app was great while it lasted. I’ll certainly miss the crazy promotions, diverse partners and the novelty of an app for miles geeks, by miles geeks.

So long, and thanks for all the miles.

it was fun while it lasted. upset that i had to dump all my credits so haphazardly.

I topped up mileslife credits on February and this actually happened!

If requesting a refund on the credits is not possible (i.e No reply from Mileslife customer service), is it possible to chargeback my recent transaction via my bank?

Can try, suggest you do it asap

Update: They did reply my email. It says: “For refund of Mileslife wallet request, refund will be processed within 30-60 working days after the operational restructuring plan.” Wow… refund after the restructuring plan, which is around August / September. What should I do next? Should i continue to trust them? Or what other actions I could take besides chargeback? (Cause i’ll only use chargeback as a last resort) Or should I just let it go and write it off? (Since I already gotten my miles from KF + bank points from top-ups) If I have to chargeback as a last… Read more »

You won’t get your money back from your bank… the only way is if it was a fraudulent charge to your card, which it wasn’t.. u topped up your account on your own free will.. and this has being going around for some time now.. talk about “the writings were on the wall”… ? Hence why I will no longer go with any 3rd party wallets anymore.. unless it’s a bank or (for now, Grab Pay, for which top ups relatively small and not the 4-digit ones like mileslife was)… But.. Indeed it was fun while it lasted.. I don’t… Read more »

Guess that was a lesson learnt, and thank you for your advice. Will avoid 3rd party mobile wallets from now on.

As a consolation at least I got KF + Bank points from the top up.

why cannot do a chargeback? the last time OFO (similar case), ppl did chargeback and manage to get back the deposit. you have nothing to lose by doing a chargeback, just additional 10 minutes of your time only.

mileslife case is like hyflux 2.0… you still believe they will refund your funds after the restructure? customers are way down the repayment list if there are any funds left. either u write it off or you try your luck with a chargeback immediately.

Noted, Guess I’ll just give it a try to do a chargeback to recover those credits.

U manage to get back

Yes, I’m glad that I have made the right decision to initiate a “merchant dispute”. My bank has investigated based on the supporting documents I have submitted, and after 2 weeks, the temporary credit amount that I disputed was placed onto my account – which means, my bank has initiated a chargeback against the merchant. 60 days has passed since the chargeback was initiated, the merchant apparently did not reply to the chargeback request, which means most likely I will win the dispute automatically – the temporary credit that was placed onto my account will become permanent. Whatever happens next… Read more »