Singapore Airlines flights will depart and arrive at all three Changi terminals for the first time, though you'll want to keep your T2 visits brief!

Prior to COVID, Singapore Airlines operated out of Changi Airport Terminals 2 and 3, with regional destinations out of the former and all others out of the latter. Then COVID hit, T2 closed shop, and all SIA flights were consolidated under one roof at T3.

But with the rapid recovery in air traffic, the airline now has a pleasant problem on its hands: it’s outgrown the capacity that T3 can offer. Therefore, ever since February 2022, SIA flights have been landing and departing from T1 and T3 (though all check-in continues to take place at T3 exclusively). 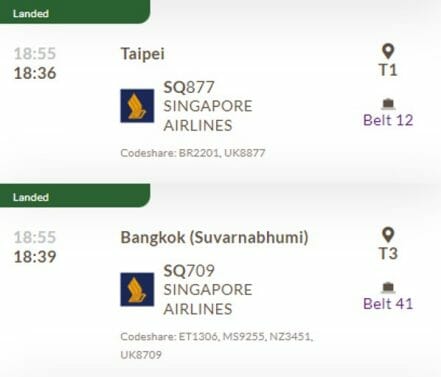 And now there’s a further development: following the news that T2 will reopen from 29 May, SIA will move to three terminal operations for the first time in Changi’s history.

Singapore Airlines to use all three Changi terminals

Per an update on the SIA website, flights will soon arrive or depart from all three Changi terminals:

Flights may arrive at or depart from Terminal 1, 2 or 3. Travellers with a connecting flight at another terminal may use the Skytrain located within the transit area to transfer between terminals

As a reminder, T2 hasn’t officially reopened at the time of writing. A couple of test flights operated yesterday, however, with passengers on SQ725 and SQ707 landing at T2 in the afternoon. 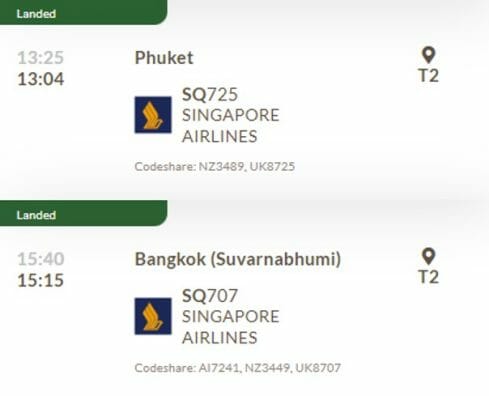 All SIA passengers will continue to check-in at T3. They’ll know which terminal their flight is departing from based on the gate:

If you plan to visit the SilverKris Lounge, be sure to budget enough time to get to your boarding gate. It can take up to 20 minutes of walking + Skytrain to get from the lounge to the tip of T1.

Also note that SIA will not be reopening its T2 lounges. In fact, the facilities at T2 will be rather spartan for now (see the next section), and it’s a good idea to minimise the time spent there as much as possible.

Arriving flights will be assigned to T1/2/3 depending on operational requirements, with terminal assignments made known at least two hours before landing via the Singapore Airlines website, Changi Airport website or iChangi app (Android | iOS)

If you’ve checked a bag, you’ll need to clear arrival immigration at the terminal you land in order to retrieve it. However, passengers with hand luggage only can take the Skytrain to another terminal and clear immigration if they so wish (in order to take advantage of better amenities elsewhere, particularly for those landing at T2).

What to expect at Changi T2

Not a whole lot, really. SIA does its best to temper expectations:

Transit travellers with a connecting flight at Terminal 2 are advised to remain in Terminal 3 before proceeding to their departure gates in Terminal 2, as only washrooms and smoking areas are available in Terminal 2 due to refurbishment works

In the first phase of T2’s reopening, Changi Airport will reopen six contact gates and three baggage claim belts in the southern wing. Arrival (but not departure) immigration facilities will also be opened; Changi has given us a sneak peak of what that’ll look like on their Facebook page.

Apart from that, it’s just the basics: washrooms and a smoking area. No duty free or other shopping options will be available.

Given the relatively small volume of flights, it may be difficult to catch a cab from T2. There’s always the Gojek/Grab option, of course, or you could walk to the MRT station at the northern end of T2.

All three terminals are physically connected, so prior to COVID you could have walked from T3 to T1 to T2 if you were so inclined.

However, the passageway from T2 to T1 is currently sealed off to the public due to renovations. This means that connections between T1 and T2 get slightly tricky, because you’ll need to go via T3. This diagram provided by SIA better illustrates the problem. 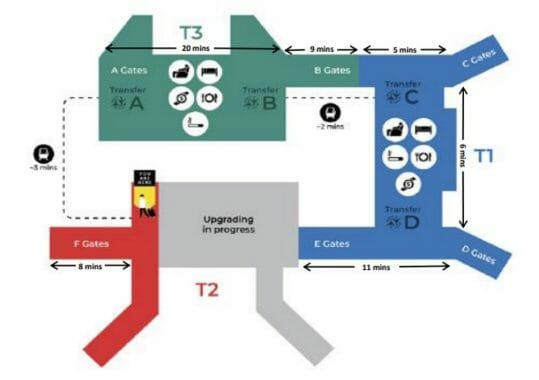 For example, a passenger landing in T2 will need to take the A-F Skytrain to T3, then walk across the concourse and take the B-C Skytrain to T1. And if your flight just so happens to be departing from the E gates, well, it’s an opportunity to work off some of that airplane food.

Operating hours of the Skytrains are as follows:

The partial closure of T2 means that the B-E Skytrain that runs through Jewel and provides some stunning views will not be operational at the moment.

A guide to transiting among the various terminals can be found here.

Singapore Airlines will soon be operating out of all three terminals at Changi Airport, although check-in will remain exclusively at T3. You’ll want to budget additional time to make it to your gate, and connections may be slightly tighter (especially if they’re between T1 and T2).

T2 is currently run by a skeleton crew, so don’t expect too much in the way of facilities. On the plus side, the renovations look like they’re coming along nicely, and I’m quite excited to see what the next phase holds.

If you’re landing at Changi over the next few days, do let us know what the arrival and transit experience is like (especially if it’s T2!).

Aaron Wong
Aaron founded The Milelion to help people travel better for less and impress chiobu. He was 50% successful.
Previous articleMileLion Weekly Deal Summary [21-27 May 22]
Next articleTHAI Airways Time to Gold: Would you spend S$14K for 2 years of Star Gold?

First flight arriving at T2 on Sunday likely to be SQ327 from MUC.

I thought T4 is alr ready and has facilities available? Why not use that

How can I buy duty-free alcohol if my flight lands at T2 and I have checked baggage?

Short answer is that you can’t. Not until they open something in t2

That’s not quite true. You can still order your duty free in advance via iShopChangi and get it delivered to your home.

There is nothing to stop you arriving in T2, taking the skytrain to T3 to do duty free shopping and then take the skytrain back to T2 to clear immigration and collect your bags. However, it is unlikely that shops between immigration and baggage claim will be open, so it depends whether you can buy those other goods in T3 transit.

I will land in Terminal 3 on Saudia Airlines and want to continue on Air Asia from Terminal 1 2hrs later, I am travelling only with hand luggage and have 2 different tickets with different PNRs and want to check in on the Air Asia flight online. Is this possible to go straight to Terminal 1 and board the Air Asia flight or do I have to clear immigration? On the changi airport site it says: “Under the government’s transit travel rules, passengers who are transiting through Changi and plan to depart on a different airline, must have both flights… Read more »