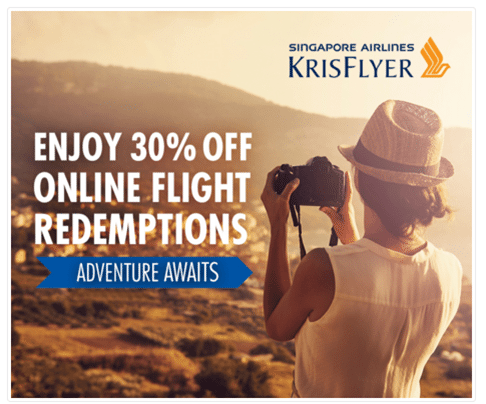 Singapore Airlines is offering 30% off Economy Saver awards for bookings made between now and 14 Feb for travel between 15 Feb and 26 May.  The destinations covered are fairly extensive- as close as Bangkok and Koh Samui, as far as London and San Francisco.

Note that the ticket has to be issued during this period, meaning that if you’re waitlisted now and the waitlist clears after 14 Feb, you will have to pay regular price.  Because SQ doesn’t clear their waitlist that far out, if you’re looking at anything beyond say, March, you may have to waitlist and start sending chasers immediately. I’m waitlisted one way from HND to SIN in April in economy so I’ll probably start bugging them every day now.

Does this make economy redemptions a “good deal?” I wouldn’t say “good”, but definitely better, especially if you’re redeeming a one-way ticket (ie business/first there, economy back), because one-way tickets tend to be only available in the Flexi or Flexi Saver bucket.

Remember that SQ normally gives 15% for award redemptions made online, so this is really a further 15% discount on top of that. Note also that it does not apply to all routes, but the listing is pretty extensive.

If you read the T&C it says that any changes are not allowed for tickets booked under this promotion. I’m not sure how to read this- I would assume that if you cancel your plans you still get a refund of your miles, but I don’t think you can change dates once confirmed without cancelling the entire ticket and booking again (And paying regular award prices, if you do so after 14 Feb)

Why are they offering this promotion? I do not know. And that scares me, somehow. Perhaps I’ve been abused too much from a loyalty point of view, but I’ve still got that looming fear of a pending SQ devaluation hanging over my head. If SQ adds premium economy for redemption, what’s to stop them from revamping the rest of the award chart while they’re at it? On the other hand, SQ is notorious for not opening new cabin products for redemption (I remember when the new business and first class seats launched in 2006 they wouldn’t let any awards be redeemed at the saver level, in an unprecedented act of arrogance), and PY might not be an exception.

Another musing for another time.

cover photo by aeroicarus
Purchases made through any of the links in this article may generate an affiliate commission that supports the running of the site. Found this post useful? Subscribe to our Telegram Channel to get these posts pushed directly to your phone, or our newsletter via the home page.

Aaron Wong
Aaron founded The Milelion to help people travel better for less and impress chiobu. He was 50% successful.
Previous articleMaximising Massive Spend
Next articleHack your laptop, save on wifi costs

A devaluation is a matter of time, and sooner rather than later at that..:(

oh damn! in my high latency, I just saw this email and was contemplating writing out something for you, maybe a short comparison of this promotion and then simple calculations to analyse if the deal was good or not. ah well! got beat to it. lol!

haha fastest fingers first man. but i do look forward to anything else you have to write about! it’s always hard to push out a new article every 2 days or so

it’s not as bad as before, but 2.3 cents is still well shy of the 4-5 for J class. I think if you have a small balance of miles and dont see yourself earning any for the near future, with an upcoming trip I’d definitely consider the promotion.