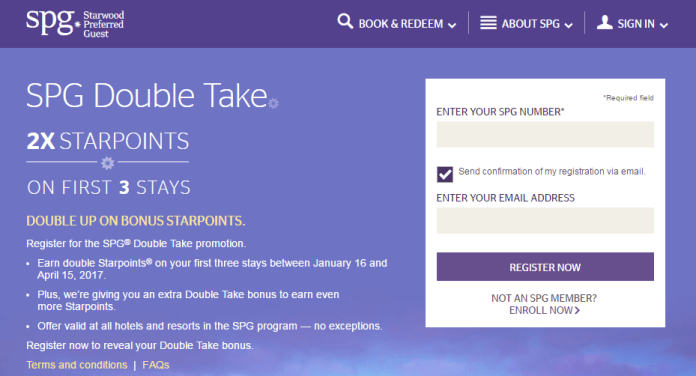 Starwood has announced its Q1 promotion for 2017 and I have mixed feelings about it. Registration is required and can be done here. Here’s the details-

Let’s start with the good. The best part about this promotion is that 100% of SPG properties worldwide are participating. No exclusions. It just strikes me as petty and small minded whenever properties opt out taking part in these bonuses, and I’ve found that elite member treatment is invariably worse at such places (given that their participation in the program is only half-hearted. Sheraton Singapore, I’m looking at you)

Unlike past promotions, they only reward your first 3 stays with double Starpoints. Subsequently, however, what’s called the Double Take bonus kicks in. 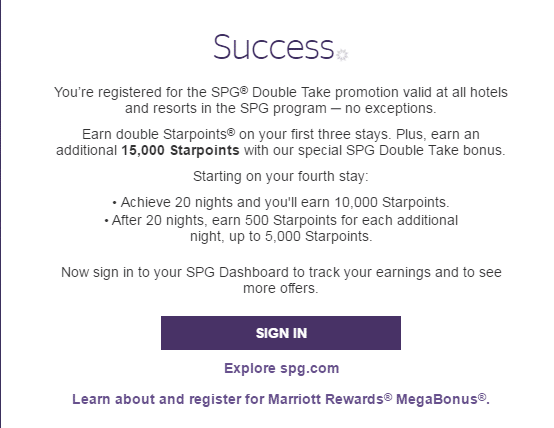 The problem with the Double Take bonus is how restrictive it is, because they only start counting the 20 nights from when you complete your third stay (confirmed by the SPG representative on Flyertalk)

I’ve already exceeded 20 nights here, but for me to get my 10,000 bonus Starpoints I need to stay a further 20 nights from the end of my third stay. Therefore, another way of reading this promotion is

Wow, they really want you to rack up the stays. For you to maximise the 15,000 point kicker, you need to stay 30 nights after your first 3 stays.

I need to do the math on this, but it appears that for some people, it may make more sense to do 3 short stays upfront so you can trigger the count for the 30 nights. It all depends- I think in general 500 bonus points a night is better than 2X Starpoints for your entire stay, but you’ll have to work the math for yourself and see what happens.

I’m going to be in Sao Paulo in January for the first two to three weeks and my old friend the Sheraton Sao Paulo beckons. 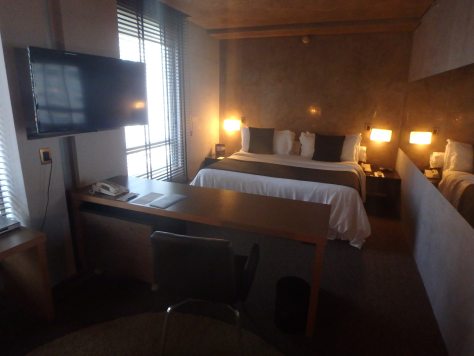 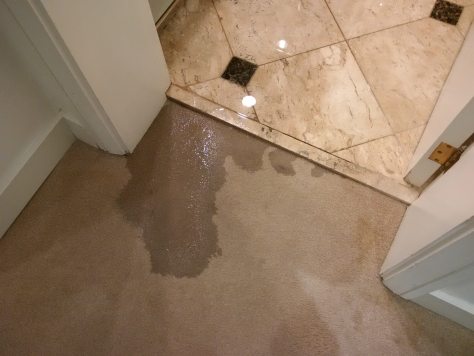 Although the promotion starts on 16 Jan, as per the T&C all I need to do is get one night of my stay within the promotion period in order to have the whole stay qualifying. So if, for example, I stay 2 Jan- 17 Jan, the entire stay qualifies for double starpoints.

I was really hoping to reach Platinum 100 this year but because of a last minute change in travel plans that will not be possible. I do retain high hopes for 2017 though, with about 49 Starwood nights already locked in. Also, 2017 will be the last year of the SPG program in its current form as we know it. After 2017 it is likely that Marriott will either do away with it completely or merge the Marriott Rewards program (boo) with the SPG one.

Therefore my immediate goal is to lock in Lifetime Gold and pray that Marriott doesn’t terminate the Lifetime program (Lifetime, in the realm of loyalty programs, refers to the lifetime of the program, not your lifetime sadly). I’ve already got 275 nights so all I need to do for Lifetime Gold is requalify for elite status for 1 more year.

For those of you who earn points with Marriott (why?) you might be interested to note that Marriott Rewards and SPG seem to be aligning their promotions. Marriott’s Q1 promotion sounds, on the surface, to be similar to SPG’s but I haven’t gone to read the details. 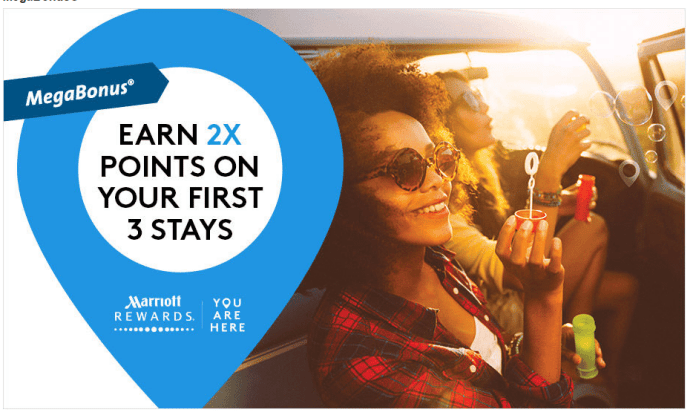 What do I think of the promotion overall? It’s definitely weaker than past ones, but since hotels are enjoying good occupancy rates now there’s really no need to incentivize people to stay. I’m hopelessly loyal to SPG so they’ll still be my choice of hotel provider for 2017, but depending on what Marriott does 2018 may be a different stoy for me…

Oh who am I kidding.

Aaron Wong
Aaron founded The Milelion to help people travel better for less and impress chiobu. He was 50% successful.
Previous articleLifemiles is offering discounted redemption tickets, but should you bite?
Next articleANZ (sort of) brings back limo service on its Travel card

marriott has a similar bonus (registration required) … unlike you, i’m a huge fan of marriott for various reasons and bummed at the influx of SPG members 🙁 anyway, for marriott members here is the link to register: http://www.marriott.com/rewards/promotion.mi?promotion=MS17&aff=MARUS&affname=1100l539&co=US&nt=PH

Haha we at starwood are equally bummed by the influx of marriott members. Perhaps we would both be happier if they just called the whole thing off

You can always come over to Hilton side! We welcome u all! ?