The next big thing.

Singapore, August 12, 2017- Singapore Airlines (SGX:C6L) has shaken up the aviation world once more with a new website feature that allows passengers to make changes to partially-flown itineraries online.

Effective immediately, passengers who have flown the first leg of an itinerary booked through Singaporeair.com or SQ’s mobile app will be able to make changes to the second and subsequent legs online. 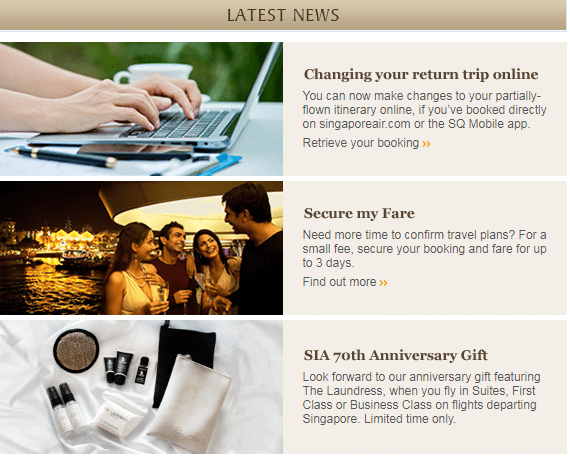 This is in contrast to the previous situation where regardless of ticket flexibility, once the first leg of an itinerary had been flown the rest of the journey could not be modified online. Customers who attempted to do so would receive an error message which led some to mistakenly believe their fare was indeed not flexible instead of calling up customer support to get it resolved.

In addition to being totally badass and maximum IT powerful, this upgrade also fulfills the wishes of terminal male pattern baldness sufferer The Milelion, who in a 2015 Christmas wish ceremony asked for “a proper functioning SQ site that, you know, lets you do useful stuff.”

Singapore Airline’s award-winning website has undergone several major enhancements in recent years, the most notable in May 2011 when it introduced frequently-requested features such as extensive use of future-proof Adobe Flash, regular timeouts for security, frequent server errors and requiring calls to customer service for the most basic of tasks like bookings and seat selection so passengers could experience first-hand SIA’s best-in-class customer service. In response to some (75. Pfffft.) underhappy passengers who launched an online petition (because online petitions are, like, totally the way to make things happen!) to get back the old site, CEO Goh Choon Phong issued an apology even though he totally didn’t need to and you should all be thankful Singapore Airlines lets you fly on their planes. The apology did not address observations that Facebook’s algorithm was recommending “R.M.S Titanic” as a similar page.

“This revolutionary new website feature will allow us to better compete with state-subsidized carriers like the ME3. Moreover, we have listened to our customers and most of them do not value website features like online redemption of mixed class award bookings or Star Alliance partner awards, adding a stopover on a one-way saver award, waitlisting for sold-out revenue flights or waitlisting for award upgrades. Therefore there is no pressing need to add these features,” said a Singapore Airlines spokesperson.

When asked why it took the airline so long to implement such a basic feature that many other airlines have had for years, the Chief Information Officer began to answer but got distracted after seeing a passing butterfly and spotting a shiny object in the distance.

The sarcasm is strong in this one, but it’s as usual, seriously entertaining! 🙂

Well, everyone seems to have learnt from Apple. Those other features you mentioned will be introduced as ‘revolutionary’ new features in the coming years.

Why is this innovative, revolutionary or game-changing? Everthing mentioned has been available on other airlines for nearly a decade.