A simple way to boost monthly card spend by up to $400 while earning rewards at the same time.

(I really should be working on that trip report, but since some requests have come in, I figured I’d set this up first.)

Sometime late last year I’d shared about Dash, Singtel’s mobile wallet offering that allowed topping up of $200/month via Singtel bill. This offered opportunities for increasing the amount of online spend charged to your card, potentially allowing you the chance to earn 4mpd for that small amount (the crowdsourced Google Spreadsheet to check which cards have been successfully clocking miles on online payments to Singtel recently.).

Back then, the only way to really benefit from this was if you were a Singtel customer – the whole concept relied on the ability to get the relevant expenditure coded as part of your telco bill. 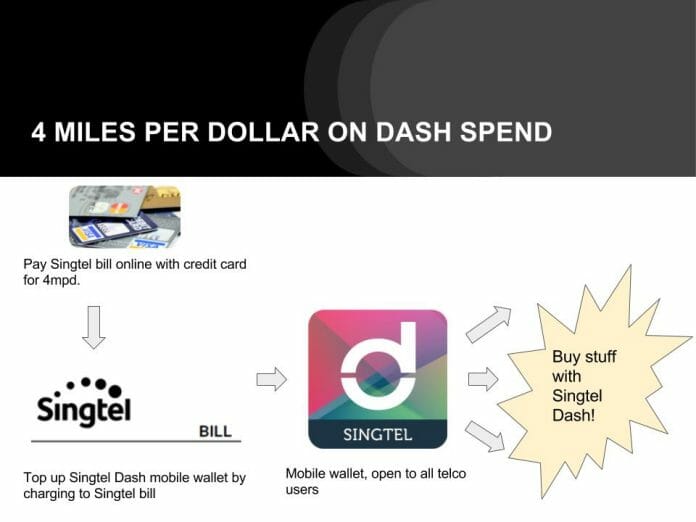 lalaisgongon left a comment that ended up saving me a whole bunch of time – it turns out that, with the Standard Chartered partner bank account, you were able to transfer money from your mobile wallet directly to your bank account, rather than away your balance at participating retailers…

Ultimately, this still took quite a bit of effort to set up (new bank account, fiddling with two apps on your phone), but was simple enough to do on a monthly basis for a modest payoff.

There’ve been recent changes to the Dash account that might make it possible (and easier) for everyone to benefit from using Dash, though. Key changes: 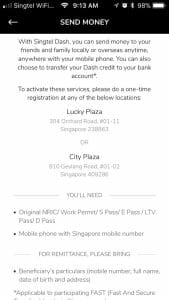 Dash is now a lot more flexible, allowing easy usage/transfer of mobile wallet funds. If you patronise its partners, you might be able to generate additional cashback by spending directly from the mobile wallet. The new channel to top up via credit cards effectively doubles the previous monthly limit for Singtel subscribers, while allowing non-Singtel subscribers to benefit as well.

At this point in time I haven’t discovered any 4mpd options for direct top-up just yet, though I believe some general spend cards (miles or cashback) would qualify. Since the card top-up fee is currently waived, it’s the perfect time to experiment! 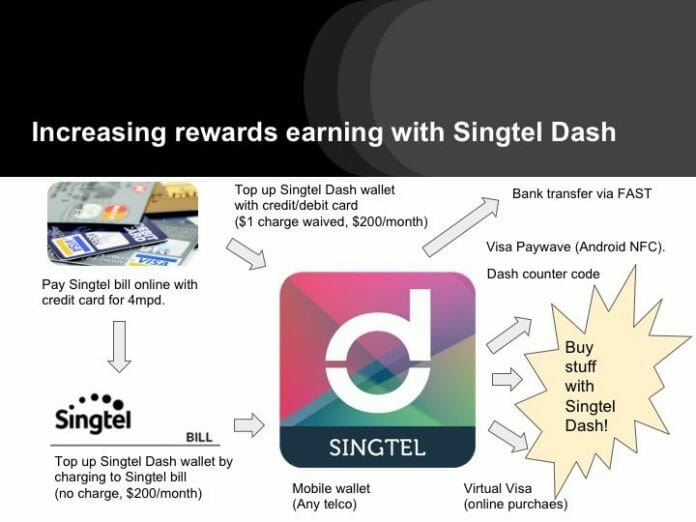 Singtel Dash allows you to top up its mobile wallet through a variety of ways. This can be done through:

This balance can be used in the following ways, among others:

With strategic selection of cards, it’s possible to generate a limited amount of additional rewards/cashback every month for yourself. This could be potentially multiplied with every member of your household, especially if any of them are Singtel subscribers under a separate billing account. It’s a little bit of hassle for a moderate payoff, and even less worthwhile for non-Singtel subscribers, so I suppose you’ll need to weigh the pros/cons of this little trick and ask yourself…

Are you Dashing enough right now?

Louis Tan
Louis believes he caught the premium travel bug after attaining KrisFlyer Elite Gold and occasionally being upgraded while shuttling between the UK, Singapore and Japan (in economy class). These travels have led to a wonderful marriage, as well as a burning desire to avoid flying long-haul economy. He previously travelled with a gryphon plush toy, Griffles, which often stood in for him in vacation photos. Griffles is mostly busy with entertaining a toddler these days, but still manages to continues amusing (and confusing) air stewardesses, hotel staff (and just about everybody else) all around the world.
Previous articleYou could earn 2.0 mpd on public transport with your HSBC Revolution card
Next articleThe new Lifemiles booking engine has major issues- here’s a workaround

Currently using it to hit 800 bucks on my hsbc premier for 5% rebate on mobile/ groceries + 0.4 mpd.

Hmm. Makes me wonder if I should go back to trying to maintain $500 OCBC spending to trigger the 360 bonus interest.

Do it for uob one. More worth it. Ocbc is like 0.3 more only

Does topping up Dash count towards the $500 and give 3.33% rebate? Think the TnC excludes topping up prepaid cards?

For non Singtel Customers, would there be some cheap way to become one at least cost?

It’s been awhile since I’ve set up, but the Dash account is linked to your mobile number – I just get asked to key in my NRIC when topping up via Singtel bill. I also think the $200 limit is tied to the Singtel bill account; so if B tops up $200 to A’s Dash account, B can’t top up his own Dash anymore… That said, let’s say person B doesn’t use Dash and is happy to trust A with access, it’s possible for user A to register his Dash account using B’s telephone number. I think NRIC number is… Read more »

You need to be a postpaid, fibre broadband, or singtel tv customer. Cheapest seems to be the postpaid sim-only plan $20/mth for 5gb data. There’s mobile broadband for $19.90/mth for 3gb but seems like a lousy deal.

I guess it won’t work for PRVI cards. As the top up to Dash is considering top up to prepaid account, hence not eligibile for the rewards based on the T&C of PRVI cards.

Please let me know if otherwise

I’m one of those people with an irrational dislike of UOB cards so unfortunately I can’t help you there – my gut suspicion is that it might award it for now (as a new merchant), but will eventually get blacklisted. And UOB does clawback, right?

That said, the topup fee is currently waived and you can easily reclaim your balance via FAST transfer, so it’s easy enough to say do 4 test charges of $50 to various cards and see what works. (Feel free to share your findings!)

Anyone tried using the uob PRIV for top up and got 1.4?

Did not see any miles for UOB PRIV

I am not sure if this going to work citipremier Miles USA issues card. Citibank both rewards card only 1 rewards point. Premiermiles local 1.2 airmiles yes confirm.

A
Reply to  Yeoh Siang Fei

Do note that to do a FAST transfer of the funds out of the DASH account, you need to do a ONE TIME REGISTRATION at TWO “Extremely convenient locations”. City Plaza and Lucky Plaza

Thanks for highlighting! I wasn’t aware of this, since this isn’t a requirement if you’d been using the SCB Dash account. I’ll update the post to reflect this.

That is for remittance overseas.
https://www.dash.com.sg/dash-benefit/remit-abroad-anytime/

I’ve checked with my wife’s account. It needs one-time registration to activate FAST transfer as well as the send to friends option. Her account was set up a few months back, but I imagine it’s the same for new Dash accounts too…

After reading this Milelion post yesterday, I made some small topups using a few ccs, then transferred the balance using FAST to my local bank account. It was completed instantly. No mention was made of any one-time registration at Lucky Plaza/City Plaza.

Yours is a new Dash account? Looks like it isn’t required, then… wonder why it’s required for some but not others. Weird…

Mine is old account and it requires me to register. Troublesome

Mine needs to go down to activate the FAST transfer too.

Created long ago when there was the $10 bonus for signing up. Yeah seems illogical to have people go down to their office to “activate” FAST feature…

I’ve confirmed with Singtel CSO: New Dash clients/existing ones NOT from SCB Dash (with its Dash Easy Savings accounts)… have to go to their office to set up the “remittance” function i.e. ability to do FAST transfer from the Dash account to other bank accounts.

I did not have to do so as I was on SCB Dash previously.

I just registered a new Dash account topped up $100, fiddled with the app a little bit and finally got to the send money screen which showed i need to do a one-time registration at Lucky Plaza/City Plaza. Now my money is stuck! Boo!

Technically you could probably use the virtual Visa to suck the money out; but unless it's being coded to earn 4mpd (or anything higher than normal general spend card) I don't really see the point – FAST transfer would still be the best option.

Dont be greedy you already have 4mpd waiting for you.

someone needs help on powerpoint, looks like my high school project, minus the brilliant word art

Unfortunately the designers didn’t accept payment by Dash. I knew I should have thrown in an animated GIF or two…

So have anyone tried which card can give 4mpd when top up dash?
I would assume DBSWW will be eligible as i assume (again) this is online transaction.

Nope. I tried with dbs woman’s card and didn’t even get any points

That’s sad 🙁 was quite happy i can get 4mpd

Good to know! So it’s not even troublesome anymore – congrats!

Can you please confirm that Dash topup via credit card will count towards minimum spend? Or does this only work for hitting the minimum spend by charging your SingTel bill to your credit card ?

Have been trying direct top up for a few cards without much luck. lalaisgongon previously shared about HSBC but that was about a year ago.

I was just trying to top up but could no longer find the Singtel Bill option. there’s only bank a/c, cc cards, and ocbc pay anyone. Am I missing something? thnks!