For a product that's priced closer to business class than economy, SQ has certainly let standards in premium economy slide.

My first experience with SQ’s premium economy was back in January 2016 when I flew it from SIN-DXB . Back then, I was pleasantly surprised by my experience. Yes, it’s ridiculously overpriced (MAS business class is cheaper than SQ PY on some routes), but you do enjoy some upgrades over economy like a much improved seat, a more personalized meal service and upgraded IFE quality (both screen quality and headphones). I found the increased spaciousness and personal attention great for business travelers, providing a sort of “business-lite” experience that allowed for greater productivity. 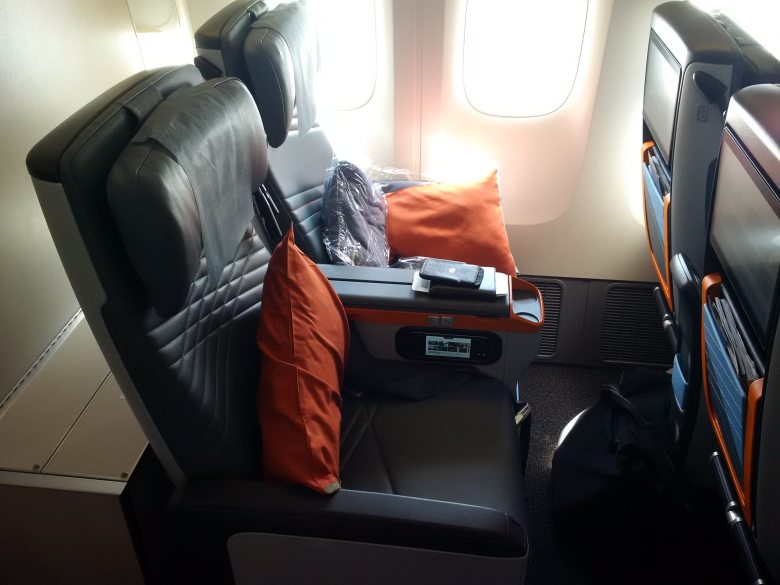 Unfortunately, my most recent experience on SQ422 (an A359) from SIN-BOM suggests that premium economy has changed, and not for the better. Although the hard product is exactly the same as before, issues with the soft product lead me to believe SQ has taken a step backwards. Here’s what I encountered:

The first time I flew Premium Economy, the FAs came around before departure with the menu asking each passenger what option he or she would like. I really liked that touch because it reminded me of how they take orders personally in J. Meals were brought to each seat individually on a tray, instead of from a trolley.

That service procedure has since changed. The SOP now is trolley service, and I didn’t even realise the menu card was stuffed into the seat pocket in front of me until the very surly attendant in charge of my section rolled up the trolley and asked “what would you like”. Although this was a breakfast service, hot drinks were not served with the meal until much later- they weren’t loaded by default on the trolley.

Trolley service means batch service, which really hampers your productivity when you’re trying to get work done. I finished my meal quickly and asked if the crew could clear my tray so I could get back to my laptop, but was told that I’d need to wait for the trolley to come around the second time. Contrast this to my previous experience with Premium Economy where attentive crew cleared trays individually from each seat as soon as each passenger was done.

After waiting a further 20 minutes it became clear the trolley wasn’t coming anytime soon. I then hit the call button not once, not twice, but three times before a grumpy crew member appeared and removed my tray. My seatmates waited a further 30 minutes for their trays to be cleared. All in all, meal service from first tray served to last tray cleared lasted about 90 minutes, which for a small cabin of only 24 seats is really not acceptable.

Aircraft cleanliness continues to be an issue

This isn’t a premium economy specific problem, but has been happening fairly frequently on my recent SQ flights. You’ll remember that back in my On the Road Again to Rio trip report, I encountered a filthy tray table in my business class seat from SIN-FRA. 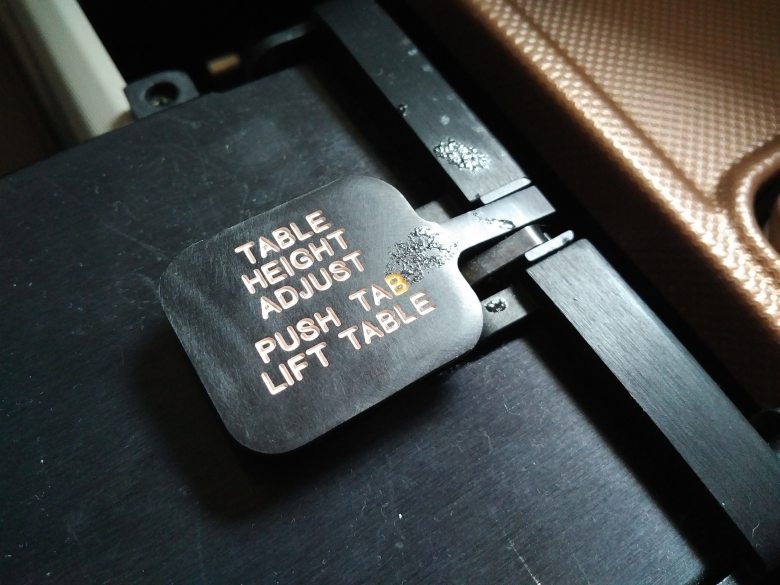 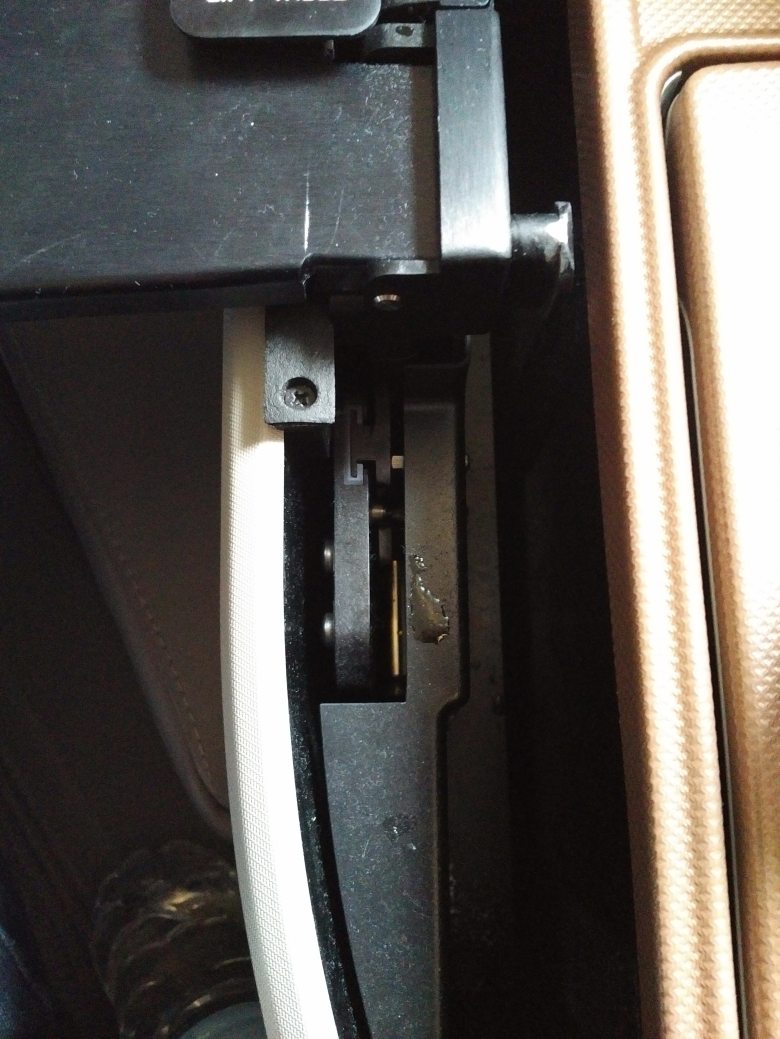 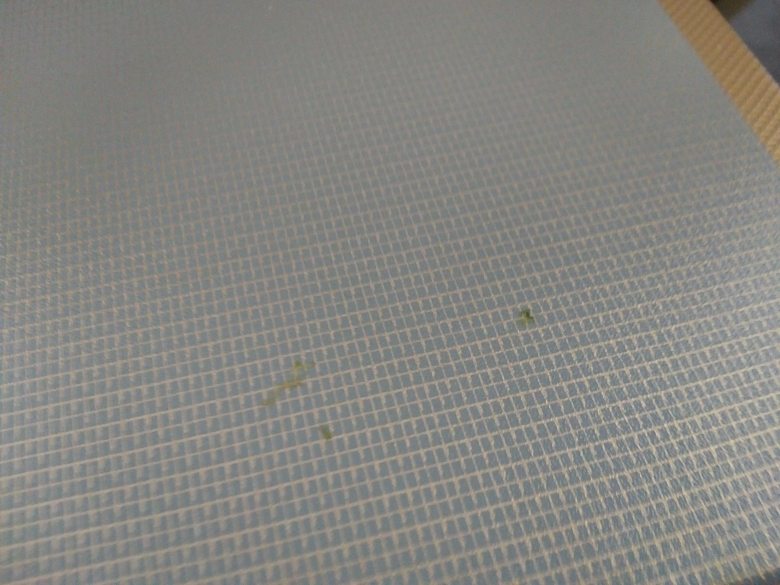 I wish I could say that was a once-off, but I encountered the same issue again on this flight. The IFE controller was absolutely filthy- check out the oil and stains on the screen. I thought the SOP for aircraft cleaning involved wiping down the controllers, but that clearly hadn’t been done here. 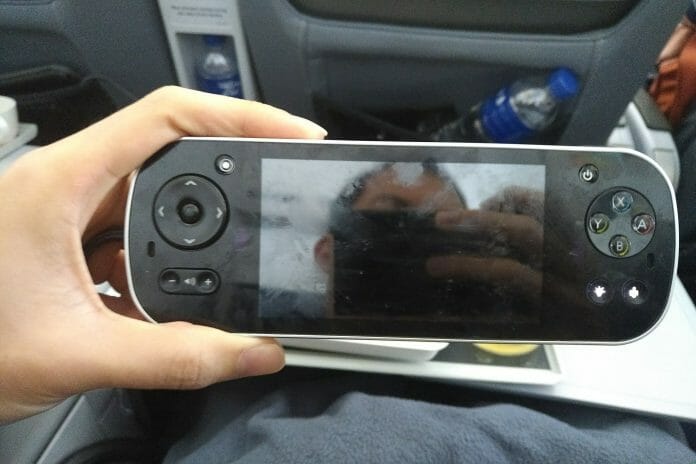 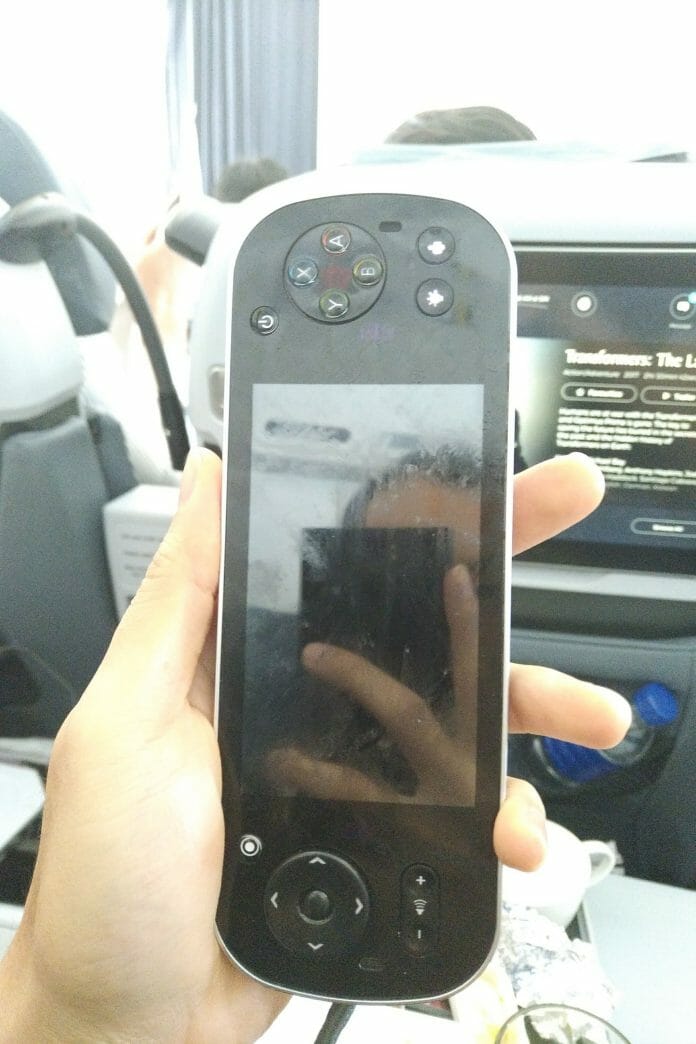 If you think that’s bad, check out the tray table. You know, the place where you put food. The underside hadn’t been cleaned at all, and had gross stains of an indeterminable source. It always makes you worry when you see something like that, because you start wondering if the rest of the seat was cleaned properly. 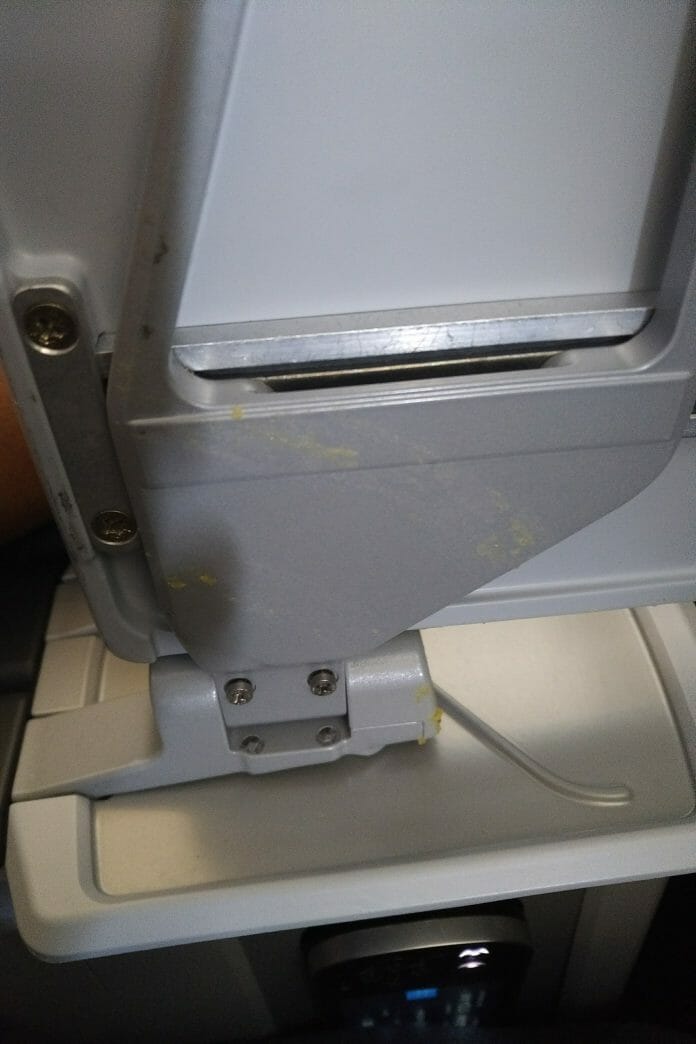 And honestly? I’m a bit more willing to let such things slide in economy, because I realise the cleaning staff have only so much time to turn around an aircraft and economy seats are going to get the least love. But seeing this spread to lower density cabins like premium economy and business class is disconcerting to say the least.

One of the purported benefits of PY was that you could expect service closer to business than economy because of the smaller cabin. And although that was my experience the first time I flew the product, my recent experience suggests this is anything but the case. Of course, I can’t tell you how much of this is because I had a bad set of crew versus the SOPs actually changing, so if your experience is different from mine do voice it out.

On my SIN-DXB flight (blocked time: 7h 40 mins), the crew did a welcome drink upon boarding, plus a round of drinks service before meal service started. Drinks were topped up regularly and nuts were distributed. 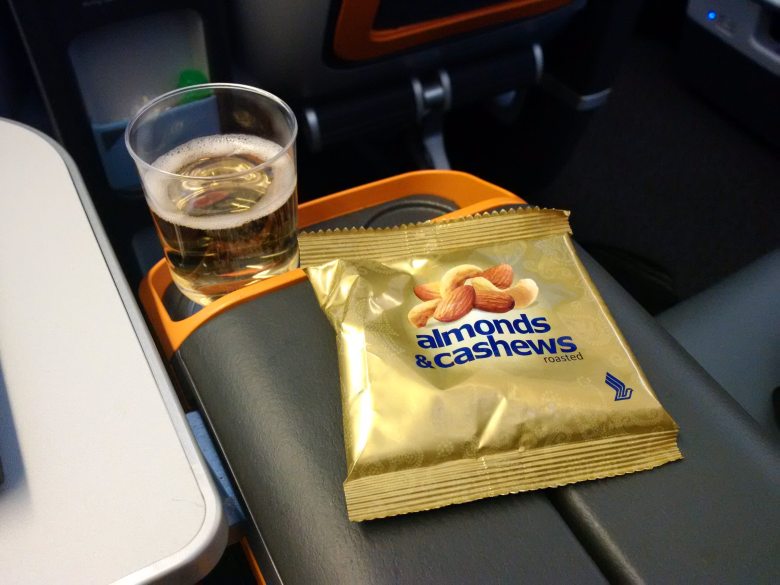 Not so on my SIN-BOM flight (blocked time: 5h 20 mins). At first I thought it was because I had a shorter, morning flight, but reading this thread on FT leads me to believe that even customers on routes as long as SIN-ZRH are not getting welcome and pre-meal drinks.

Crew responsiveness is also an issue. I know that in business class SQ’s service standard is that call buttons must absolutely be answered within a certain (short) period of time. My experiences from SIN-DXB led me to believe there was a similar standard for PY, but on my most recent experience I saw call buttons in PY regularly going unanswered, or answered after a long period of time (again, this is probably a function of the crew I had).

I’m wondering if the crew issues are because SQ redeployed its crew allocation. Previously, PY appeared to have a set of crew whose priority was to look after the cabin, only helping out in Y during non-peak periods. Now, PY and Y seem to share the same set of crew, which might also explain why the crew didn’t memorize anyone’s name in the PY cabin unlike last time round.

Conclusion- still a great hard product, but let down by service issues

People will disagree with me, but I still think SQ PY has a great hard product. I was in one of the two middle seats on the A359 (that has a 2-4-2 configuration in PY) and I never had any issues with personal space or armrest wars. The seat, although not ideal for sleeping, is good enough for a quick doze. The high definition IFE screen is crisp and great for watching movies, and the headset is a real step up from the crappy ones in economy.

But it’s the soft product that lets the experience down. The first time I flew PY, I came away with the impression of a product with a seat that approximated economy and service that approximated business. However, it seems to me that SQ now views PY and Y as the same cabin in terms of service standards, just with a different seat. This is reflected in the issues I raised above (plus the fact that on my SIN-BOM flight the curtains between PY and Y were not closed at any point, versus one year ago where they were closed throughout).

Some may argue that I’m expecting too much. I think the key question here is this:

Is premium economy suppose to be economy plus, or a poor man’s business?

How you view this question will affect where on the economy/business spectrum you expect premium economy to fall. I argue it’s supposed to be closer to the business end, simply because of what SQ charges. Consider these prices from SIN-SFO:

This seems to suggest that SQ is pricing PY closer to a J product than a Y product, and therefore I think it’s totally reasonable to see this more as Business minus rather than Economy plus.

If you’ve been following SQ’s A380 cabin products launch, you’ll know that they have expanded the size of the premium economy cabin on the new A380s. But it’s hard to see how SQ will fill these seats unless its product becomes more competitive, both from a pricing and service point of view.

Aaron Wong
Aaron founded The Milelion to help people travel better for less and impress chiobu. He was 50% successful.
Previous article
Malaysia Airlines double elite miles promotion, or how badly do you want elite status?
Next article
Getting started with your DBS Multi-Currency Account

Cleanliness and maintenance of the hard product is becoming an issue on SQ flights in general and their India flights in particular. I’ve found torn upholstery in PY on their A359 to DUS, malfunctioning trays and lids in J class to DEL and BOM, and even frayed upholstery in Suites! Not sure what’s going on with their cleanup and ground service crews (manpower cuts?) but it’s definitely showing. Rude crews are a factor of flights to India generally, across airlines. It’s sadly a chicken and egg scenario, where there are rude passengers and rude crew alike, trying to out-rude each… Read more »

Torn upholstery on brand new a359s is really a bit much. Can understand the old a380s being all beat up, but there’s definitely something being cut in the maintenance angle

I think they are looking to fill PY with redemption seats rather than revenue seats. Limit J class availability in order to “force” you to redeem PE instead. Then cut corners.

Is this an issue only on India flights or PY in general?

Jokes aside, I had abysmal service on my last 2 SQ flights. Will be getting on another tomorrow in J. Hope its better.

i feel obliged to defend my movie watching choices. i was originally planning to watch war of the planet of the apes but my finger slipped.

I agree with you
For my regular SIN-Guangzhou flight.
Crew services was definitely subpar standard now.

This post about cleanliness makes me recall a blog post I read about the author seeing cleaning squad of Japan airport that manage to clean up a flight within short time.

perhaps i’m a hypochondriac, but the IFE controller and tray table were the grossest things I’d ever seen. Once I saw all those oil stains on the controller i thought NOPE, not going to use that

Technically based on real restate, price of PY should be slight more than 9/8 of B, E or H prices because the catering is very similar to Y albeit with a cheap champange, cashew nuts and BTC of Y food. But SQ is charging PY typically at 6/5 to as much as 7/5 of over the above. Not appealing…

PY is a bad value proposition – seats are only marginally more comfortable than Y, catering is glorified Y food. When the seat in front reclines, you are stuck with a seat inches away from your face as well. On my journey from LHR, we were constantly made to feel like al-cheapos when the priority security queue didn’t let us through even though the check in staff had told us we were entitled to it, the boarding gate had no PY sign and the ground crew there didn’t really know whether to allow us in before Y. Considering paying for… Read more »

I only buy PY when SQ runs their occasional promotion that brings the price down to Economy Flexi Saver levels , the 110% miles earning rate makes for a good mileage run.