An overview of the Onyx Rewards hotel loyalty program

Onyx Rewards is a decent hotel loyalty program to consider if you make frequent trips up to the Land of Smiles.

For those of you who make the annual pilgrimage up north to Bangkok, you’d be familiar with the Amari chain of hotels. What most of us don’t realize is that they run their own loyalty program known as Onyx Rewards.

The Onyx Rewards program works the same way as most if not all the other hotel loyalty programs that we are acquainted with. Elite status in the program is earned only via nights or stays, unlike Hilton which has the flexibility of earning status through points earned (who even qualifies on points?).

Here’s an overview of the status requirements and benefits you’ll receive as an elite member : 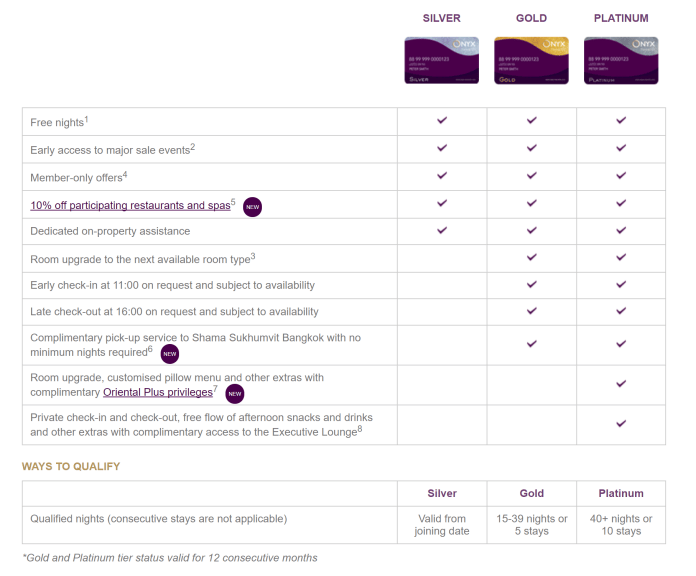 Upon registration, you’ll instantly receive Silver status which is their base status (misleading I know). Interestingly, you’ll be eligible to receive a 10% discount at participating hotel F&B outlets and their spas just by having base status, a good perk if you ask me. Qualifying for higher level status through stays seems to be your best bet in this program as to achieve top tier Platinum status, which confers you Lounge benefits on top of what you’ll receive as a Gold member, you’ll only need 10 stays compared to 40 nights.

As a Silver member, you won’t be receiving much other than the 10% F&B and spa discount. As you progress to Gold, you’ll be receiving complimentary room upgrades, early check-in of 11am and a late check-out of 4pm. All of which are “subject to availability”. Another interesting perk is the free pick up service to their newest property in Bangkok for Gold and Platinum members.

Interestingly, the terms and conditions for the room upgrade policy state that Suites are excluded at Amari and Ozo properties as well as overwater villas in Amari Maldives alongside 2 and 3 bedroom residence in Oriental Residence Bangkok. So the maximum category you’ll receive in an Amari property would be a upgrade to an Executive Room.

When you reach Platinum with Onyx Rewards, you’ll be accorded the extra privilege of having Executive Lounge access at a grand total of three properties (Amari Watergate Bangkok, Amari Johor Bahru, Amari Ocean Pattaya) as well as having Oriental Plus status, which is recognized only at the Oriental Residence Bangkok.

Onyx Rewards points are accrued at a rate of 1 USD to 10 Onyx Reward Points. Interestingly, they have given a further breakdown of how much of a particular currency would earn 10 Points in addition to the earning rates in US Dollar, so as to avoid confusion possibly in their different hotel markets. (or rather so that customers won’t make a fuss over points crediting in USD)

Points are earned via the eligible room rates as stated on their site, I couldn’t find a clause which states that incidentals would earn you points during a stay.

Points can be redeemed for free nights starting from 7,000 Points a night. You can find the minimum amount of points for redemption here. From what I gather, the points required are tagged to room rates, similar to Millenniums redemption style. Also, the process to redeem points is a long and hard one as you’d have to call up the customer service hotline to request a redemption and fill up a form after. Ugh.

When would Onyx Rewards make sense?

Using the example of Bangkok which most Singaporeans flock to for a short getaway (who doesn’t like Pad Thai and S$10 graphic t-shirts?), there are a plethora of hotels to choose from. The big 3 of chain hotels have at least 3 properties each in Bangkok. For instance, the Hilton group has the DoubleTree by Hilton Sukhumvit, Hilton Sukhumvit, Conrad Bangkok and the Millennium Hilton Bangkok. While Marriott has Renaissance, Marriott(s),Courtyard as well as their flagship  property, the JW Marriott.

If you’re sick of the typical chain hotels and would instead prefer to be located right across Platinum fashion mall while trying out a different hotel, the Amari Watergate would be a good choice. I have only heard good reviews of the Amari Watergate from friends who have stayed there previously and have made return stays to the hotel each time they visit Bangkok.

Their hotel footprint is actually very small and their properties are mostly found in Thailand. They do have a hotel in Maldives though, which has decent reviews on Tripadvisor. It’s located on a private island as well, similar to the Park Hyatt Maldives.

Here’s a screengrab of the list of loyalty programs that can be matched : 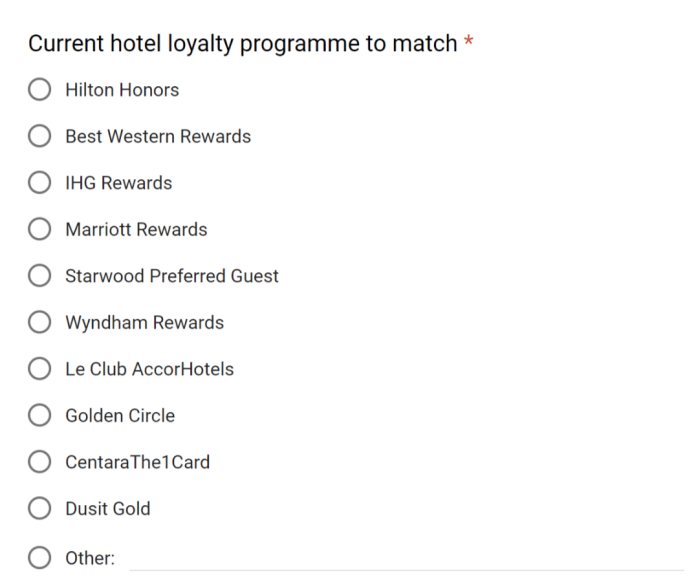 Interestingly, Hyatt isn’t on the list but I think if you add it under ‘Other’ it’ll probably be accepted. Note that they won’t match Blue and Silver equivalent of statuses of other programs which most probably means Hilton Silver, Marriott Silver, IHG Gold and the likes won’t be matchable. If you’re interested to request a match you can do so via this google docs form. Note that you’d have to first register for a Onyx Rewards account and upon registration, 1,000 points will be given to you free (yay).

My take is that SPG Gold will of course be matched only to Gold on Onyx. However, for Hilton Gold and Marriott Gold, I’m not exactly sure which tier you’d be matched to.

The Onyx Rewards program is definitely not like your usual hotel loyalty programs where elites receive incremental perks compared to non-elites(i.e complimentary breakfast). Given their small footprint around the region (and the world), I feel that Onyx Rewards might be worth looking into if you want to have a different hotel experience in Thailand as that’s where majority of their hotels are located in.

Matthew Chong
Addicted to luxury travel while trying not to go broke, Matthew is always on the prowl for the best deals in the travel industry. When he's not busy studying, he can be found trawling the internet and reading up on credit cards, airlines and hotels. He also wouldn't mind taking you out on a date.
Previous articleEarn Double Qantas Points on all Australian Hotel Bookings
Next articleHow CNA’s “Singapore Airlines doesn’t deserve our online hating” article misses the point entirely

Note that Oryx should be Onyx.
http://www.onyx-rewards.com

Oops yeah. Typos galore. Thanks for pointing it out!