A Singaporean based in Australia, Kazimier enjoys travelling as much as he’s keen beans for avo toasties during brekkie later in the arvo (that’s Aussie slang, he says). Kazimier also happens to be a university student so the miles game is his only way to afford the nicer non-student budget things in life. 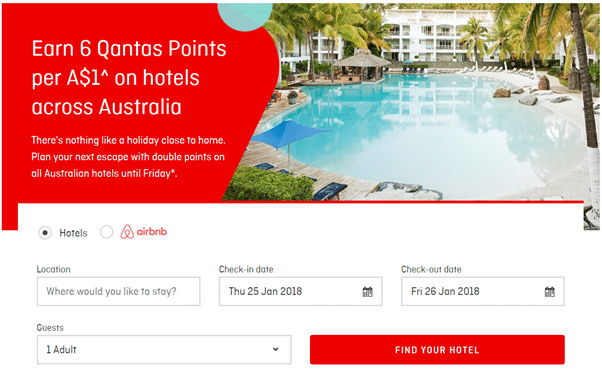 For those of us Singaporeans who somehow find themselves frequently travelling to Australia because of work, leisure, studies, or even to migrate (don’t move to Perth or Brisbane – there’s so many of us there!), you’re in luck… until Friday 11:59pm (AEDT) 26 January 2018.

For reference, a stay at the Hyatt Regency Sydney will earn you 1,134 Qantas points at AUD$189 per night:

The only caveat: please note that this promotion is only valid for hotels in Australia #sadreactsonly.

As a Singaporean, there isn’t much incentive for me to be a Qantas Frequent Flyer as most credit cards here are partners mainly with Star Alliance members like Singapore Airlines’ Krisflyer and Cathay Pacific’s Asia Miles. However, there is one reason I lean towards Qantas: points don’t expire… until after 18 months of inactivity.

Like most young people, I’m not a travel hacker who earns thousands of points a month by spending through credit cards. I’m just a student trying to play a game with the cards I’ve been dealt with so far (no pun intended), so my points earning power is limited and takes a bit of time to accumulate. So unlike its Star Alliance counterparts, Qantas’ essentially non-expiring points system works better for those who do not earn points as much and as fast as other MileLion readers.

With this promotion, you’re effectively paying AUD$0.1667 per Qantas point, which to me makes more sense than getting 1 Starpoint per USD$1. Plus, it counts as Qantas points activity so your points don’t expire if you do something with your Qantas points in the 18 months after your completed hotel stay.

Personally, I value Qantas points at anywhere between AUD$0.01 to AUD$0.07 apiece and I earn more Qantas points through hotel stays than actual Qantas flights. Then again, I’m not a numbers guy so you do your own math.

Also, as with all hotel booking websites, Qantas hotels may not produce the best prices, so make sure you do your own research and compare!

If you’re hoping to travel to Australian anytime soon (especially if your kid is about to start their undergraduate studies in Australia in February/March and you’re accompanying them because you’re desperately in need of an excuse for a vacation), book quickly… and don’t say bojio!

The Milelion Community
The Milelion Community is made up of like-minded people who want to share tips to help each other travel better for less. If you've got a tip, trip report or any other hack that you think the community would be keen to know about, reach out via our contact us option!
Previous articleReview: Ethiopian Airlines B787 Business Class Addis Ababa to Sao Paulo
Next articleAn overview of the Onyx Rewards hotel loyalty program

Good luck with Qantas points in Australia haha…. Some things from my perspective about QFF: 1) Compared to KF and Asia Miles their redemption rates are high. You only need QF if you want to fly east, or just absolutely abhor the idea of a stopover in SIN or HKG 2) QF availability is tight; my experience is much better availability on KF or AM 3) QF introduced a scheme many years ago whereby almost all Aus credit cards must direct credit the points into QF if they want to be QFF points awarding cards (except the very top-tier cards… Read more »

Oh and qff stings you massively with fuel surcharge