Air France’s La Premiere cabin on their Boeing 777-300ERs is touted as one of the better looking first class cabins in the skies right now. Lucky from One Mile At A Time reviewed this product some time back and had nothing but praise for it. Flying in La Premiere also gets you a tarmac transfer in a Porsche and use of the exquisite Air France First Class lounge in Charles De Gaulle with their excellent ala carte dining option. I’m already drooling while writing this article.

Redemption on the La Premiere cabin can only be done via the Flying Blue program and La Premiere can only be booked via their ‘Flex’ prices (think SQ Standard awards) and you must be an elite member of Flying Blue. Basically what this means is that the criteria puts most if not all of us (I have never met someone who mentioned that he loves SkyTeam) out of reach of ever redeeming a La Premiere seat…unless maybe you struck it rich dealing with cryptocurrency and won’t bat an eye at spending S$16,000 for 2 to fly to Paris in La Premiere.

While browsing Facebook, I came across a Sponsored post from Air France advertising their two-to-go La Premiere fares. Captivated by the bed and that cute table lamp, I clicked through.  (lo and behold a French girl appeared, how fitting)

The promotion is only valid with a minimum of 2 passengers, so sadly you won’t get to indulge in this alone. On the promotional site, they only state 3 destinations which are on sale but generally upon checking, it’s valid for almost all of Air France’s European destinations (i.e a connection in Charles De Gaulle). The sample fare that was on display  in the site only listed 3 destinations though and are on a per-passenger basis :

Of course if you were to connect in CDG onwards to the US, your fare would be much more expensive.

La Premiere fares would get you 3 x 32kg worth of check in luggage each, so for 2 passengers in the journey you would have a grand total of 6 x 32kg worth of luggage allowance. I don’t know about you but I think that would surely raise the eyebrows of the custom officials should you take advantage of the full allowance. Strangely 1A is consistently blocked out by Air France. Poor you, not being able to snag 1A. 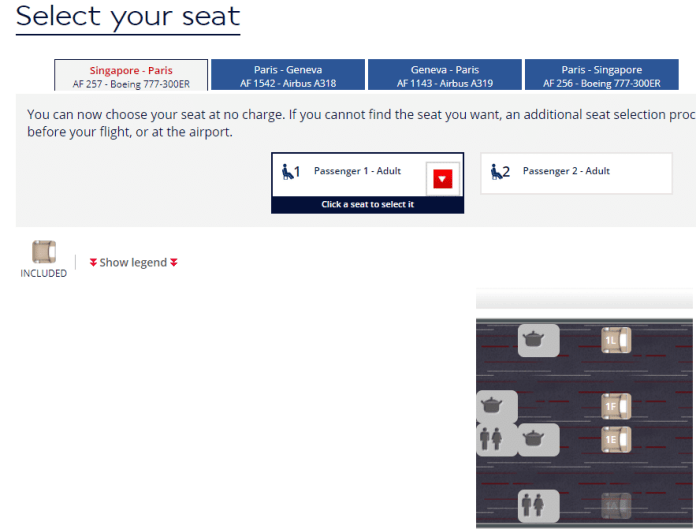 Also as a La Premiere guest, you’ll be granted the exclusivity of using the Jetquay CIP Terminal when in Singapore. Of course don’t expect it to be even close to what they offer in CDG but getting to your gate in a buggy…sounds luxurious.

A quick check on Google Flights show excellent availability of this fare throughout the travel period (it is still super expensive after all). Note that prices quoted below are in USD.  If you were to only fly direct to Paris, note that your fare would be significantly higher than if you were to transit onward to another destination. 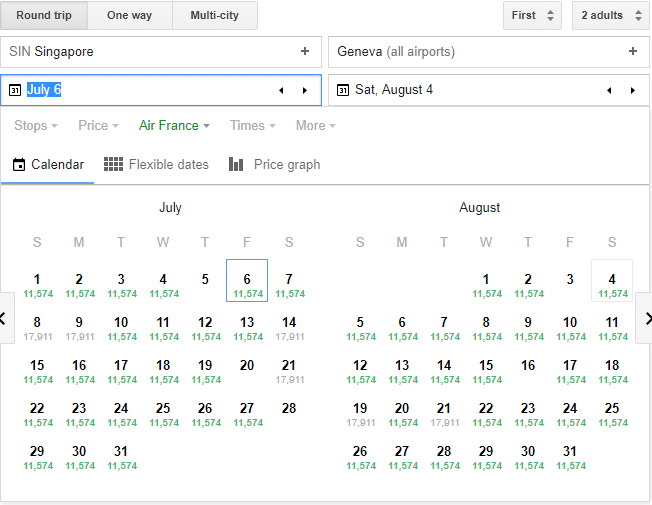 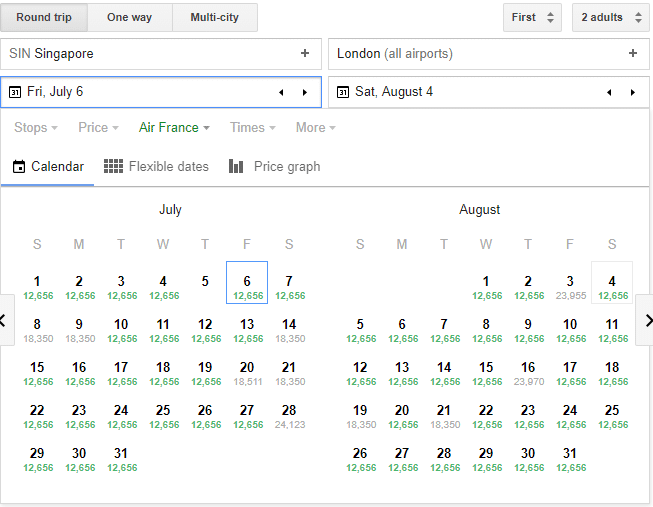 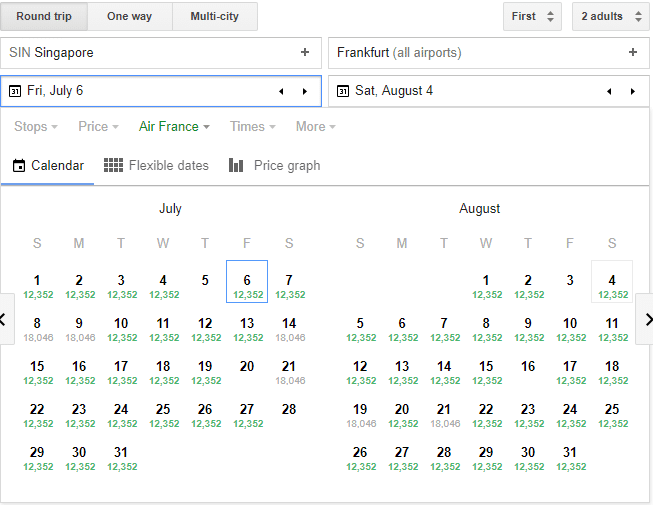 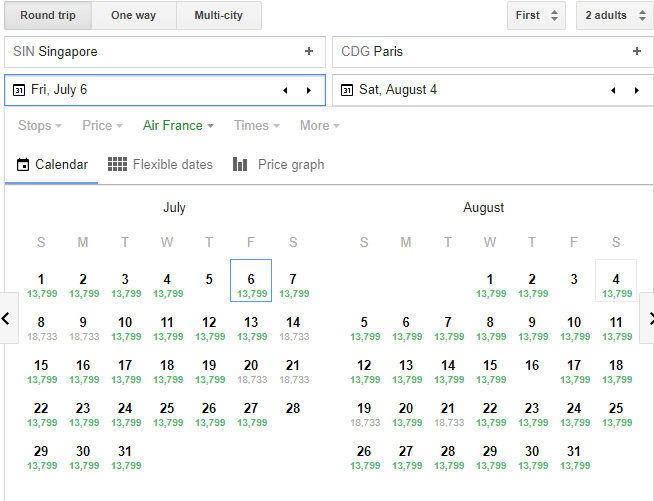 Should you even be considering this?

Well if you have S$16,000 to spend on your holiday and don’t mind splurging, this deal might be worth considering. For what it’s worth, comparing it with their nearest European rival Lufthansa, which also provides a luxurious First Class experience in Frankfurt, fares cost upwards of USD17,000 for 2 persons to London while Air France is offering fares close to USD5,000 cheaper. 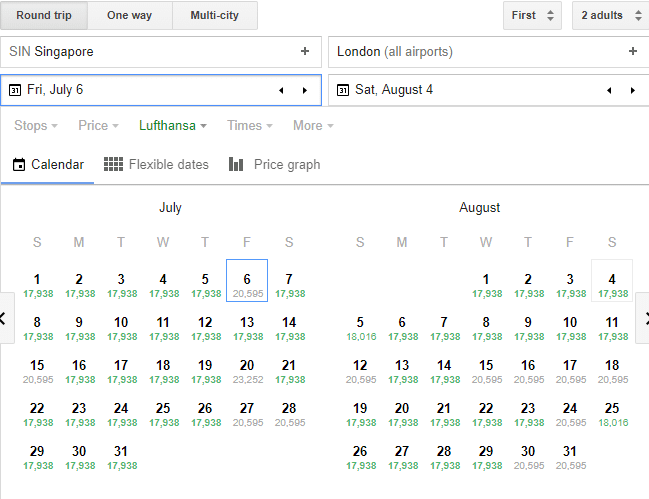 Note that on the Boeing 777-300ER, La Premiere is laid out in a 1-2-1 configuration in a single row and it takes on the style of having a bedroom. Instead of doors, you have curtains. (screams in baguette).

Granted these fares are still very highly priced, but comparatively to other airlines…they’re considered “cheap” in the grand scheme of things. Given that you’ll dine like a king in their First Class lounge in CDG and get chauffeured to the plane while you look out the window of your Porsche at the normal people walking down the jet bridge(hah).

Should you take advantage of these fares, crediting them to Air France Flying Blue would earn you approximately 27,000 redeemable miles based on an earn rate of 4 miles/EUR for Ivory members and earn a grand total of 60XP (their new status earning system).

As the fares are rather high, you will actually come out ahead using a 2mpd earning card for booking this. i.e HSBC Revolution/Maybank Visa Horizon due to the spending cap imposed for bonus miles on the DBS Altitude as well as the DBS Woman World Mastercard.

Now if only I went onboard the crypto train back in May 2017 I would book this in an instant…if I had someone to go to Paris with. (*cries*)

Matthew Chong
Addicted to luxury travel while trying not to go broke, Matthew is always on the prowl for the best deals in the travel industry. When he's not busy studying, he can be found trawling the internet and reading up on credit cards, airlines and hotels. He also wouldn't mind taking you out on a date.
Previous article
Why I’m no longer using my Maybank Horizon Visa Signature card
Next article
Review: San Cristobal Tower Santiago

how do white people scream in excitement when there is an SQ sale?

They’re probably too used to having sales til they’re immune to them haha. But maybe they scream in chicken rice perhaps?