Comparing the San Cristobal Tower, a Luxury Collection Hotel, and its sister property the Sheraton Santiago.

There are a total of four Starwood options in Santiago, but the most interesting by far was the Sheraton/San Cristobal Tower combination. 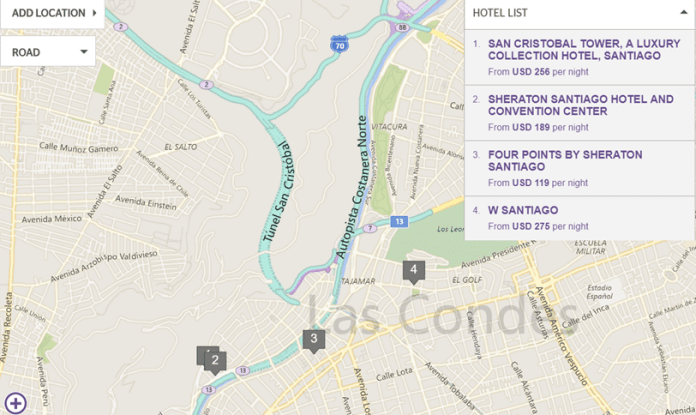 The San Cristobal is a Luxury Collection Hotel that prices out at 35% more than the Sheraton. The two properties are co-located, and the Sheraton’s lobby is directly connected to the San Cristobal’s. On the Flyertalk property thread there are even reports of elite members who book the Sheraton getting upgraded to rooms in the San Cristobal (I’m not quite sure how that works in practice, but my guess is they’d earn points and elite benefits under the property they booked, not the one they stayed in).

My understanding is that the two properties used to be one, but at some point the Tower section broke off to become a more upmarket Luxury Collection Hotel, leaving the other relatively low rise building to become a Sheraton. We ended up staying one night in the San Cristobal and two at the Sheraton, so I thought it’d be interesting to do a comparison post of the rooms and overall experience.

Most Uber drivers are familiar with the Sheraton, but mention the San Cristobal and they get confused. As it turns out, the entrance to the San Cristobal Tower is much more nondescript than the Sheraton. The Sheraton has a large driveway that’s clearly marked. The San Cirstobal? You need to drive a bit further down and turn the corner, where you’ll find this unmanned entrance.

I was surprised that despite the more upmarket branding, there was no one waiting to receive guests and help with bags. It wasn’t just the day I arrived- the subsequent few times I returned to the hotel I noticed that the entrance was totally deserted. The Sheraton, on the other hand, had a porter team constantly at the doors.

You ride up a small escalator to the main reception, where the concierge and check-in desks are. At check-in, I was told that Platinums have to choose between 500 points or breakfast, which was quite disappointing considering how many other high-end properties around the world just include both. There was no room upgrade either, despite the property showing plenty of suites available online.

The lobby was pleasant enough, with several sitting, reading and TV areas. 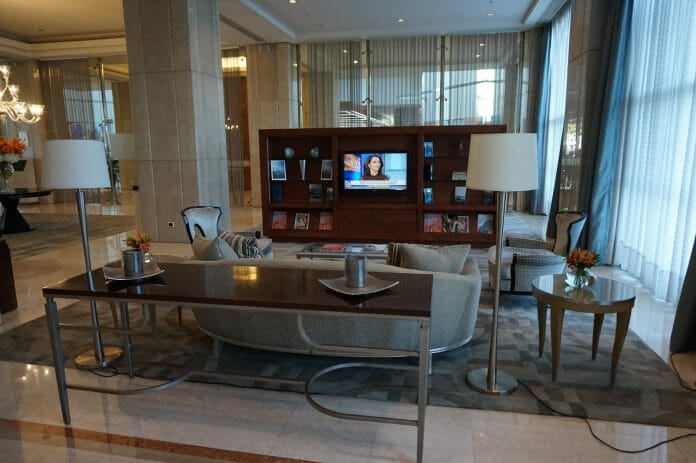 Here’s the umbilical cord that joins the San Cristobal to the Sheraton.

The standard room I was assigned has the same layout as any other chain hotel, but was slightly larger in size. The whole room looks really dated, and reminds me of the Sheratons you find in old glory cities like Casablanca.

There was a large, flat screen TV (way too many hotels invest in a big screen TV without investing in the corresponding HD cable subscriptions- as a result a lot of the standard definition programming they receive through analogue looks horrible when you try and watch it. Such was my experience viewing the Australian Open) and a DVD player.

The work desk was fairly large and could take both my laptops, with conveniently located power outlets too.

A separate bar counter had the ice bucket and two bottles of complimentary water.

I mentioned the San Cristobal has Sheraton DNA in it. How deep? Well, the room service menu features a Sheraton Burger and Sheraton Club House sandwich…both properties are served by the same kitchen.

The bathroom had dual sinks, a bathtub and separate shower. If I didn’t know better, I’d say the design really reminded me of a suite in an old world Sheraton (tarnished gold colored taps and bathroom fixtures, gold trim around the mirror, gold grip bars…)

The  bathroom may look Sheraton-y but fortunately the toiletries were not.

One thing this property did have going for them was some pretty snazzy monogrammed towels. That is, until you find that the Sheraton had the exact same ones.

This property is a Luxury Collection hotel and therefore there is technically no “executive lounge”. However, the hotel has its own lounge on the 21st floor which Platinum members and guests in certain rooms can access. Why is this distinction important? Because of breakfast- if a property were a Westin or Sheraton and had an executive lounge, you could take your 500 points as a Platinum and still get free breakfast by virtue of your access to the executive lounge. In this case, Platinums need to pay to eat breakfast in the lounge just like anyone else.

The hotel lounge is on the 21st floor and since the hotel itself is on a hill, you get quite a commanding view of the environs.

The lounge is split into two areas- the happy hour bar area, and the breakfast area.

I’ll start with the bar area where happy hour is served. Happy hour in the lounge runs from 6.30pm to 9 pm daily. As mentioned, it’s complimentary for Platinum guests, and anyone else who wants to partake can pay 16,900 CLP (S$37).

Would I pay 16,900 CLP for what was on offer? In a word, no. I found the items on offer anemic at best- cheese, cold cuts, cold sandwiches, bland cakes.

There was only one tray of hot items- and they’re just as appetizing as they look.

As I mentioned the spread is complimentary for Platinum members, but they still give you a zero balance bill to sign. I suspect it’s to encourage people to leave tips, because there’s a very prominent line for tips in the bill. One thing I realised about Santiago is that most restaurants have an optional 10% service charge that’s added to the bill, but it’s done in a way that it’s not really optional. They come up to you with the credit card machine and ask “do you want to tip?” which makes it a bit of an awkward situation if you say “no”…

On to breakfast, and none of the breakfasts we had in South America impressed us all that much. As I explained in my Marriott review, breakfast just isn’t a thing on this continent. That said, I was hoping that a property like the San Cristobal which has a positive deluge of foreign travelers would make an exception. Not so- the offerings were limited in scope and poor in taste. 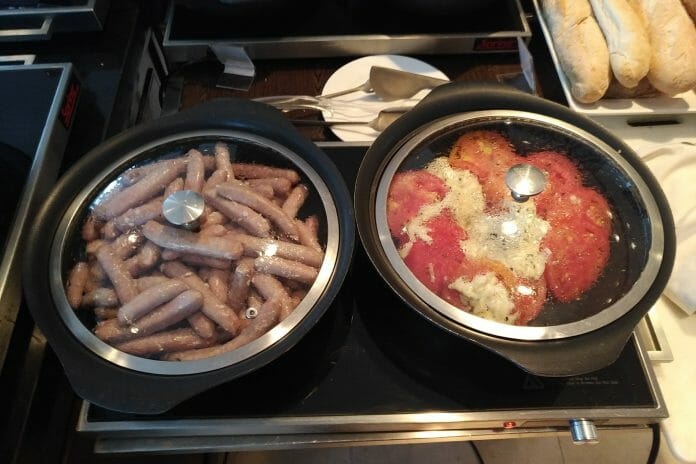 Special mention for the hashbrowns, which were completely limp and soggy. Crispy items typically don’t hold up well to being in a steam tray, so I was surprised the catering team was alright letting them soak in their own steam instead of putting them on a plate under a heatlamp like most other hotels do. I ended up requesting for a fresh batch which after many communication snafus finally made it to my table.

Special mention also for the pancakes. They may look ok in the photo below but they were completely hard, like hockey pucks. Given that they’re on a separate ala carte menu which I presume is made to order, they were really disappointing.

Breakfast ended up costing around US$20 per person, and was totally not worth it.

On to the Sheraton now, just to point out how similar the two properties are. My overall impression was it didn’t make sense to shell out 35% more for the San Cristobal, given how lackluster the overall experience was and the fact that guests from either property could access all the facilities of the other. Moreover, the Sheraton has a lot of similarities in terms of product offering to the San Cristobal, as you’ll soon see.

In fact, I much preferred my room in the Sheraton because it had way more natural light. It also didn’t feel as worn as the San Cristobal. The carpet, for example, looked a lot newer than the San Cristobal’s.

The bathroom also felt more modern (note the conspicuous lack of gold trim), although the shower was way too dark and had very poor water pressure. The towels were exactly the same as those used at the San Cristobal, with the same monogram.

Interestingly enough, the Sheraton used the exact same bath amenities as the San Cristobal. So that’s another reason not to pay more for the latter.

Bonus points for this…

Although I didn’t much care for the lounge at the San Cristobal, the one in the Sheraton was even worse. I think it says a lot about the lounge when it’s left unlocked most of the time…

Here’s what’s on offer during the day. I love the statement the artist was trying to make with the use of blank space.

The breakfast offerings weren’t much better. Soggy hashbrowns, soggy bacon, nuked eggs…by the second day I was heading to Mcdonald’s for breakfast. I actually like one of the items they seem to only offer in Chile- it’s a toasted avocado and ham sandwich. Avocado is a popular breakfast item in Chile but neither the San Cristobal nor the Sheraton had it available.

You could clearly see that the San Cristobal and Sheraton were catering breakfast from the same template- there’s too much overlap to be a coincidence. At most the San Cristobal had a few additional items, but it was certainly not worth the overall price premium you’d pay in terms of room rates.

If I had to pick between the two hotels and I was on my own dime, there’s little doubt I’d go for the Sheraton. The price premium you pay for the San Cristobal simply isn’t worth it- their rooms are more dated, the amenities available to guests in both properties are almost the same, the breakfast quality is awful.

A much better option for Santiago if you’re able to splurge is the W- it’s a small premium to the San Cristobal but the location is much better and the property quality way superior. I ended up visiting the W to check out their breakfast spread and it was head and shoulders above anything the San Cristobal had to offer. If you’re on a budget the Four Points has a great location too, and rates much cheaper than the Sheraton/San Cristobal.

tell us what you do in these unusual cities you visit.

oh, i visit some sites, make some slides and may or may not destabilize the local government.