Citibank has kickstarted an absolutely amazing promotion with Apple Pay that runs from 26 April to 31 July 2018. With this promotion, you can earn up to 8 mpd on transactions made through Apple Pay on your Citibank Ultima, Citibank Prestige and Citibank Rewards cards, or 4 mpd with your Citibank Premiermiles card (only the Visa version, curiously).

The promotion covers most Citibank cards, but the Ultima, Prestige and Rewards present the biggest bang for your buck as you’ll see in the table below (remember that 1 Citi Dollar= 0.4 miles): 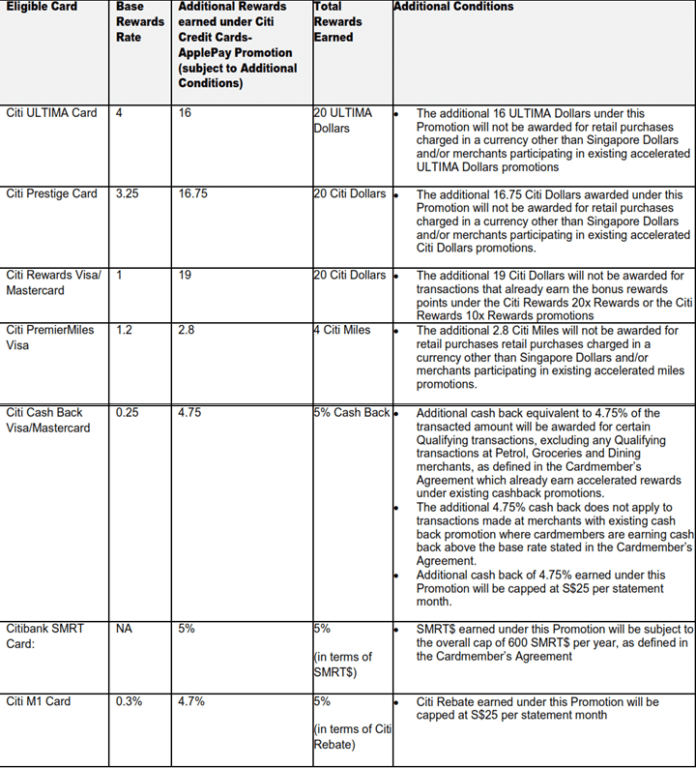 You can find the full T&C here.

Unfortunately, this is strictly for Apple Pay only. No love for those of us with Google Pay or Samsung Pay- we’ll have to keep using the OCBC Titanium Rewards for 4 mpd. However, if you have an iPhone that supports Apple Pay, you should absolutely be looking to get in on this deal while it lasts. Apple Pay is accepted so widely now (virtually every terminal that takes contactless payments will also accept Apple Pay, or other mobile payments for that matter) that this is tantamount to getting 8 mpd everywhere.

There is no cap on the bonus points you can earn through this promotion. Also, there is no suggestion within the T&C that this cap has anything to do with the $12,000 annual cap on 10X for department stores, bags, shoes and clothes.

The catch, if you want to call it that, is that if you’re using the Citibank Rewards card, the existing 10X (4 mpd) will override the 20X. That’s to say, if I use my Citibank Rewards card with Apple Pay at a department store, or any store that sells bags, clothes or shoes, I’ll earn 10X (4 mpd) points instead of 20X. Also, if you hold on to the Ultima, Prestige or Premiermiles cards, note that you will not earn the bonus if you pay in foreign currency. 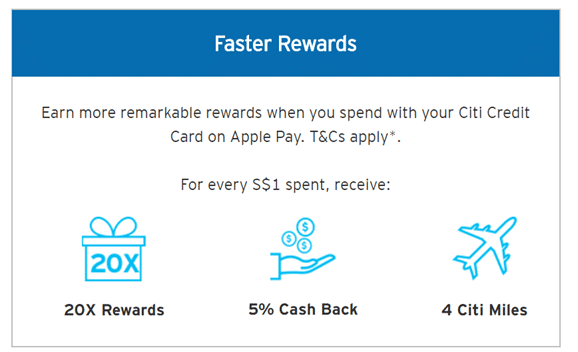 Although my head spins with the sheer possibilities for 8 mpd everywhere, I am a loyal Blackberry Keyone user and sadly won’t be able to partake in this deal. I will however be instructing the iPhone-using (read: poser) Milelioness to act swiftly.

If you don’t have a Citibank card yet, you can consider supporting the running of The Milelion by applying for one through the links below or in this article.

Aaron Wong
Aaron founded The Milelion to help people travel better for less and impress chiobu. He was 50% successful.
Previous articleJoin us for the first Milelion Mini-Module: Power Award Searching
Next articleWorld of Hyatt offering 40% bonus on points purchases, get luxury stays for less

Would this work with FavePay etc?

Wherever you can pay with apple pay it’ll work

Sorry for a stupid question – how to use ApplyPay in Grab app?

Similarly, I have this question too.

1. Any idea when will the additional points be awarded to us? Instantly with the base rewards or do we have to wait a few months?
2. From the TnC, it means I can spend in foreign currency and get 8mpd with the Citi Rewards card?

Hi is the Citibank rewards for anything payment as long as it is using Apple Pay? Thanks

Thanks Aaron! Never received any notifications from Citibank ;(

I was unaware of this and bought flights through the SQ app in March have been awarded the Apple pay bonus points. It appears I’m not getting them on Uber rides.

Just a gentle correction : its till 31July

Does anyone know if the 8mpd (20x) will applicable If I were to purchase a Macbook via the Apple Store iPhone App & pay via Apple Pay Or will it only be 4mpd (10x) due to the following: “The catch, if you want to call it that, is that if you’re using the Citibank Rewards card, the existing 10X (4 mpd) will override the 20X. That’s to say, if I use my Citibank Rewards card with Apple Pay at a department store, or any store that sells bags, clothes or shoes, I’ll earn 10X (4 mpd) points instead of 20X”… Read more »

It says under the TandC that for Citi PM visa that the “additional miles will not be awarded for retail purchases”. Is this a typo?

Is there a cap to Apple Pay contact-less payment at retail stores? A lot of places still say there is $100 cap on “tap” payments.

Is it true that there is no cap to the miles earned during this period? or is it limited by the cards own 120,000 rewards points limit?

I went to recheck the terms and conditions recently, and correct me if my reading of it is wrong, but it seems to me that the 120,000 rewards points limit is per 60 months, instead of per card anniversary? The terms and conditions as stated below: 8. “Citi Dollars Period” means a period of 60 months commencing on the date when the (i) the Eligible Card is established, or (ii) the Eligible Card is renewed and each subsequent Citi Dollar Period will commence on the expiry of the previous one. (I am assuming here that renewal is based on card… Read more »

That line’s been pointed out a few times. I agree that it rationally reads that way – all I can say is that in practice, people have been observing that the cap kicks in annually at 120k.

Additionally, the website (under ’10x rewards’) also states that ’10X Rewards capped at maximum of 120,000 Rewards points per card anniversary year.’ – so I believe the T&C might simply be in error.

I’ve read 4-5 different pages of Ts & Cs.. they don’t always tally with each other.. adding the fact that different cards have different rules and perks doesn’t help.. Has anyone reached out to Citi for clarification?

Empirical evidence… I have exhausted my 10X rewards for MC and Visa before and it resets on the card anniversary, not after 60 months.

I’ve phoned Citi directly and spoke to agent.. for Citi Prestige MC.. Veronica says no limit to 20X Rewards Points so long as latest 31 Jul 2018 and on Apple Pay and Local Spend.

But what about the Citi rewards card? I am crossing all my fingers and toes that the unlimited points earned during this period is true!!

Checked for Rewards card and 20x was credited without issues, including foreign currency spend.
As to whether there’s a limit, we’ll have to go by whatever information is available now – so far there is no indication that there is a limit.

I got out of Premiermiles card because service was pretty bad and there were missing promo miles every time. With this promo, I feel like getting back to PM. However their Agoda promotion still confuses me. On the special land site, the instructions (but not the TnCs) say book a promo eligible hotel. However after trying multiple destinations, none of the hotel has the promo eligible sign. Am I doing something wrong?

Promo of the decade: Citibank offers up to 8 mpd via spend on APPLE PAY! – SG GOOD LIFE

[…] from the Milelion has done up a fantastic table summarising everything. Click here to visit the […]

[…] Citi enabled Apple Pay on their Singapore-issued cards and is promoting this with 8 points per SGD o…. Uncapped. […]

[…] another hypothetical situation. Suppose Citibank decided to pull its uncapped 8 mpd promotion with Apple Pay early. Would people be upset? You bet. Would they be as upset as they are now with […]

[…] when used with Apple Pay from now till 31 July 2018. If you’re only finding out about the amazing Apple Pay promo now, you’re kind of late to the game, but I guess better late than […]

[…] amazing Apple Pay-Citibank 20X promotion may be over, but both cards are still useful for your miles earning […]

[…] amazing Apple Pay-Citibank 20X promotion may be over, but both the Citibank Rewards and Citibank PremierMiles are still useful for your […]

[…] amazing Apple Pay-Citibank 20X promotion may be over, but both the Citibank Rewards and Citibank PremierMiles are still useful for your […]

[…] amazing Apple Pay-Citibank 20X promotion may be over, but both the Citibank Rewards and Citibank PremierMiles Visa are still useful for your […]